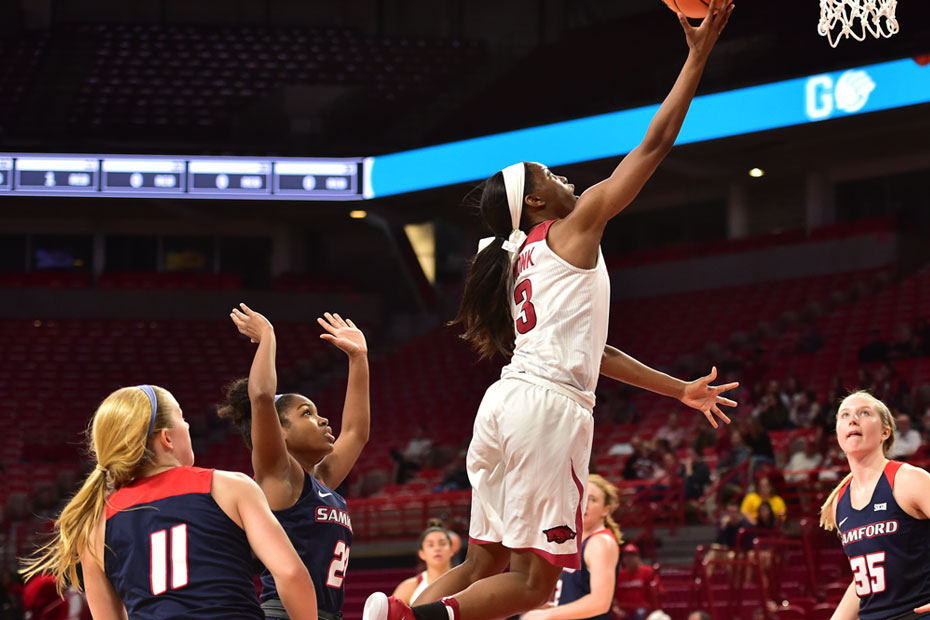 FAYETTEVILLE, Ark. – The University of Arkansas women’s basketball team had five players in double figures leading to the Razorbacks’ second win of the season and the 100th career win for head coach Mike Neighbors.

Arkansas dominated the first and fourth quarters outscoring Samford 27-18 and 26-17, respectively. The Razorbacks put together a 9-0 run in the first frame and never trailed in the game. Arkansas hit 10 3-pointers and 16 free throws behind a 7-for-7 performance from Monk and a 5-for-5 effort from Cosper at the line.

• Arkansas went on a 9-0 run to start the game.
• Malica Monk had 12 points and Jailyn Mason had 10 points in the first half.
o It is Malica Monk’s second consecutive game in double figures (18 vs. Sam Houston State).
o Malica Monk’s 21 points and nine rebounds are career bests.
• Kiara Williams (10) and Taylah Thomas (13) had a career-bests for points.
• Devin Cosper also scored in double figures for the second consecutive game.

UP NEXT
The Razorbacks open a four-game road swing with three away games and one neutral site contest. Arkansas first travels to Nebraska on Thursday, Nov. 16 followed by a road trip to Oral Roberts University on Monday, Nov. 20. The Razorbacks take on UTEP on their home court and New Mexico State in El Paso, Texas, as part of a Thanksgiving tournament on Nov. 24-25.

MORE INFORMATION
For more information about Arkansas women’s basketball, follow us on Twitter and Instagram at @RazorbackWBB and on Facebook at Facebook.com/RazorbackWBB. Be sure to subscribe to our YouTube Channel, “Kickin’ It In The Neighborhood” for an inside look at the Razorback women’s basketball program and check out The Neighborhood podcasts at CoachNeighbors.com.