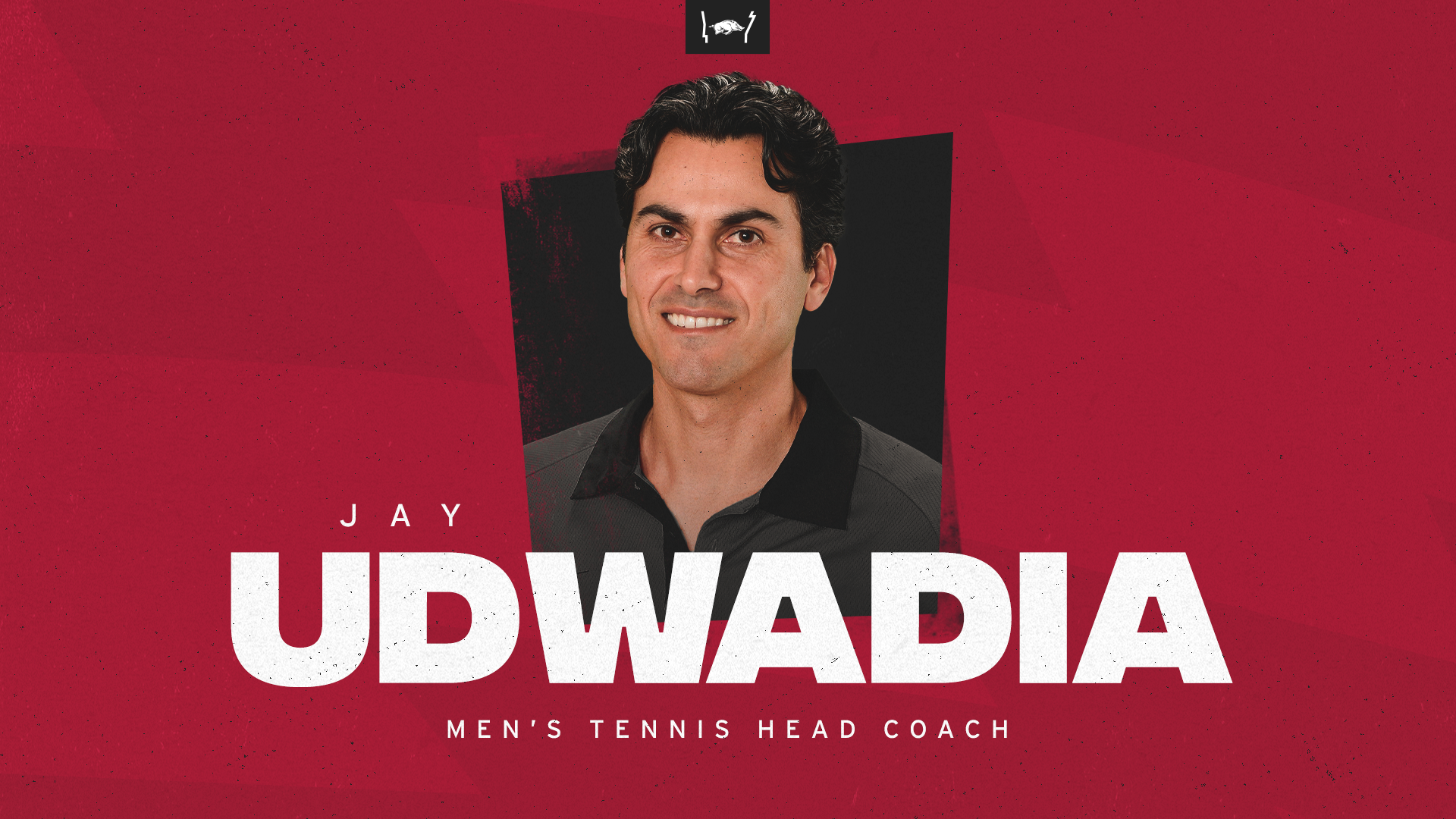 FAYETTEVILLE, Ark. – Former Razorback men’s tennis standout Jay Udwadia has been named as the head men’s tennis coach at the University of Arkansas. Udwadia returns to his alma mater to lead the men’s program after successful head coaching stints at Oklahoma State, Fresno State and Drake.

“We are excited to welcome Jay Udwadia back to the University of Arkansas as our head men’s tennis coach,” Vice Chancellor and Director of Athletics Hunter Yurachek said. “Jay is an experienced collegiate head coach, who has demonstrated his ability to lead multiple programs to sustained success. As a former Razorback student-athlete, he has a tremendous passion for this University and our program. Jay is committed to building a nationally competitive and championship caliber men’s tennis program at the University of Arkansas.”

In his most recent head coaching tenure at Oklahoma State, Udwadia posted a record of 137-71 in nine seasons and led the Cowboys to seven NCAA Tournament appearances, including a NCAA Tournament Sweet Sixteen appearance in 2016. During his tenure, OSU was ranked inside the top 25 Division I rankings for eight years in a row, including three years inside the top 10. OSU reached as high as No. 4 in the national rankings in his tenure.

“I want to thank Hunter Yurachek and (Men’s Tennis Sport Administrator) Rick Thorpe for trusting me with their men’s tennis program,” Udwadia said. “It’s not everyday someone gets the chance to coach at their alma mater. Arkansas has a rich tennis tradition. I am grateful to have the opportunity to build and be a part of Razorback history as both a player and now as a head coach. My family and are very excited and we can’t wait to get there!”

In his 19 seasons coaching at the collegiate level, Udwadia’s teams won at least 15 matches in all but four seasons, with those coming in his first season and his final pandemic shortened season at OSU and his first two years at Fresno State.

Prior to beginning the turnaround at Oklahoma State, Udwadia served eight seasons as the Fresno State men’s tennis coach, and spent the year before as the head coach at Drake. His overall record of 257-132 includes a 2004 Missouri Valley Championship and consecutive Western Athletic Conference titles in 2011 and 2012.

After kicking off his coaching career at Drake with a 17-6 season in 2004, Udwadia took over the program at Fresno State. He led the Bulldogs from a 10-11 record in his first year to seven consecutive winning seasons from 2006-12. Udwadia took Fresno State to the conference championship match in six of those seven years and won the league title twice in that span. His teams were consistently well regarded in the ITA National Rankings, reaching as high as No. 14 in 2012.

Udwadia, who was named the WAC Coach of the Year in 2011 and 2012, guided three Bulldogs to WAC Player of the Year honors, including Jakub Cech in 2006, Rudolf Siwy in 2008 and Remi Boutillier in 2012. He guided 12 singles players and 11 doubles tandems to All-WAC honors during his time at FSU.

Prior to coaching at Drake, Udwadia was the assistant coach at Northwestern for four seasons. While there, he helped lead the Wildcats to a fourth place finish in the Big Ten in 2002 along with a No. 45 national ranking. Northwestern participated in the NCAA Tournament in 2000 and 2002 under Udwadia.

Before beginning his career as a college tennis coach, Udwadia spent one year on the ATP Tour, earning 26 ATP doubles points and capturing an ITF doubles title. He competed in tournaments run by the French Tennis Federation, and also played club tennis in Australia.

Udwadia, a native of Williamsville, N.Y., was a four-year letterwinner under Arkansas head coach Robert Cox at the University of Arkansas and was team captain during his senior year.

While at Arkansas, he helped lead the Razorbacks to three NCAA tournament appearances and a spot in the Top 25 of the national rankings before graduating from the university in 1997 with a bachelor’s degree in sociology. Udwadia and his wife, Jennifer, have two sons, Dash (7) and Fynn (5), and a daughter, Raya (1).