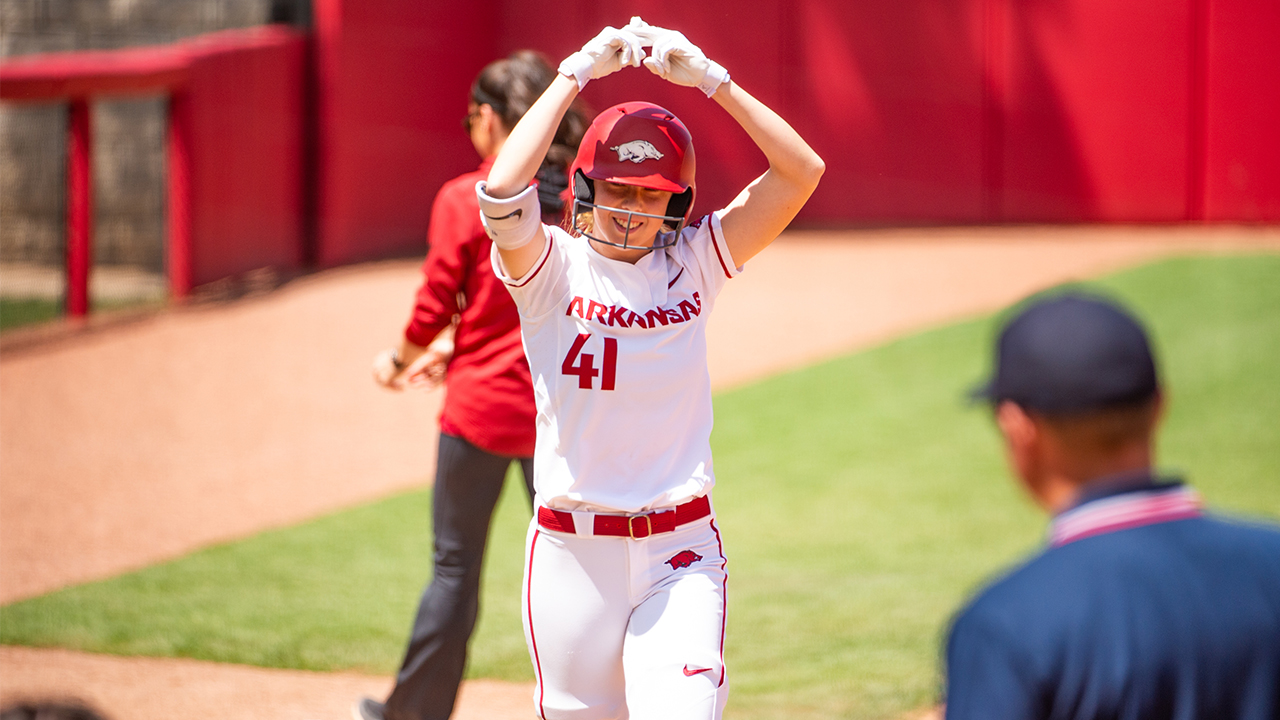 LAS CRUCES, N.M. – With No. 24 Arkansas (3-1) down to its final two outs in the top of the seventh inning and trailing by a run in front of a raucous New Mexico State crowd, junior Danielle Gibson blasted the go-ahead two-run home run to left which lifted the Razorbacks to a 5-4 triumph over the Aggies (2-1) on Saturday night in Las Cruces. Earlier in the day, the Hogs defeated Bradley (1-3) 12-1 in five innings. Junior Linnie Malkin had a career-day at the dish and launched two dingers and inside the circle, senior Autumn Storms notched two wins.

The Razorback bats did all their damage in three four-run innings and banged out nine hits. Junior Kayla Green put Arkansas on the scoreboard first with an RBI groundout to the right side that plated senior Sydney Parr. Malkin crushed her first homer of the season, a three-run shot, into the trees beyond the centerfield fence to kickstart a successful day for the offense.

In the third inning, sophomore Audrie LaValley was hit by a pitch with the bases loaded to make it a 5-0 Arkansas lead. Parr continued her torrid start at the dish and slashed an opposite field bases clearing three-RBI double toward left center to balloon the lead to, 8-0.

The Braves’ lone run was of the unearned variety in the top of the fourth inning as the leadoff batter reached second on a throwing error that sailed past the first base bag. Later in the inning on a delayed steal, a throw went wide of third to score the run.

Arkansas’ offense went right back to work in the bottom of the fourth and began the frame recording three consecutive singles, the third by Green, scored junior Braxton Burnside from second. Freshman Rylin Hedgecock and senior Aly Manzo both delivered in pinch hit assignments as Hedgecock registered an RBI single to left and Manzo a two RBI knock to center.

The success of the Arkansas’ bats allowed the pitching staff to work low stress innings. Storms (2-0) kept her workload down and earned the three-inning decision. She surrendered just two hits and fanned two while only throwing 43 pitches. Freshman Jenna Bloom tossed the last two innings in relief and allowed an unearned run and one walk while striking out three. Morgan Radford (0-2) took the decision for the Braves and went three innings allowing seven hits, 11 runs, seven earned runs and four walks.

Nine different Arkansas batters collected a hit and the Hogs hit .357 (5-for-14) with runners in scoring position. Green and senior Ryan Jackson each scored two runs.

For the first time this season the opposition scored first against the Razorbacks. New Mexico State hit three solo home runs in the bottom of the second to go up, 3-0.

Senior Keely Huffine and LaValley both singled to begin the Arkansas fifth inning, after a fielder’s choice and a flyout, the Razorbacks still had runners on first and second. Burnside came through and hit a scorching two-out single to center that sent home the first Arkansas run.

Arkansas scored another single tally in the top of the sixth inning. Malkin and Jackson both singled with one out. After a flyout, LaValley dribbled an infield single deep in the hole to short which scored sophomore pinch runner Sam Torres and brought the Razorbacks within one, 3-2.

McEwen sent a single to center to leadoff the Hogs seventh inning and Burnside put down a sacrifice bunt to move her to second. That setup Gibson’s long ball that gave Arkansas a 4-3 advantage. The very next batter, Malkin gave the team a much needed insurance run on a solo homer, her second of the day.

The Aggies plated an unearned run in the bottom of the seventh inning on an error but could not complete the comeback.

Storms (3-0) was the third Razorback to step inside the circle during the game and threw 2.2 innings. She allowed two hits, one unearned run, one walk and struck out four. Bloom provided 3.1 valuable relief innings, did not allow a run and punched out a career-best five. Matalasi Faapito (0-1) took the decision for NM State and allowed 10 hits, four earned runs, one walk and struck out five. Chloe Rivas provided an inning of relief and allowed two hits and one earned run.

The Razorbacks collected a season-high 12 hits.

Arkansas closes out its first weekend of competition at the Troy Cox Classic with a single game against Nebraska at 10 a.m. on Sunday, Feb. 9.