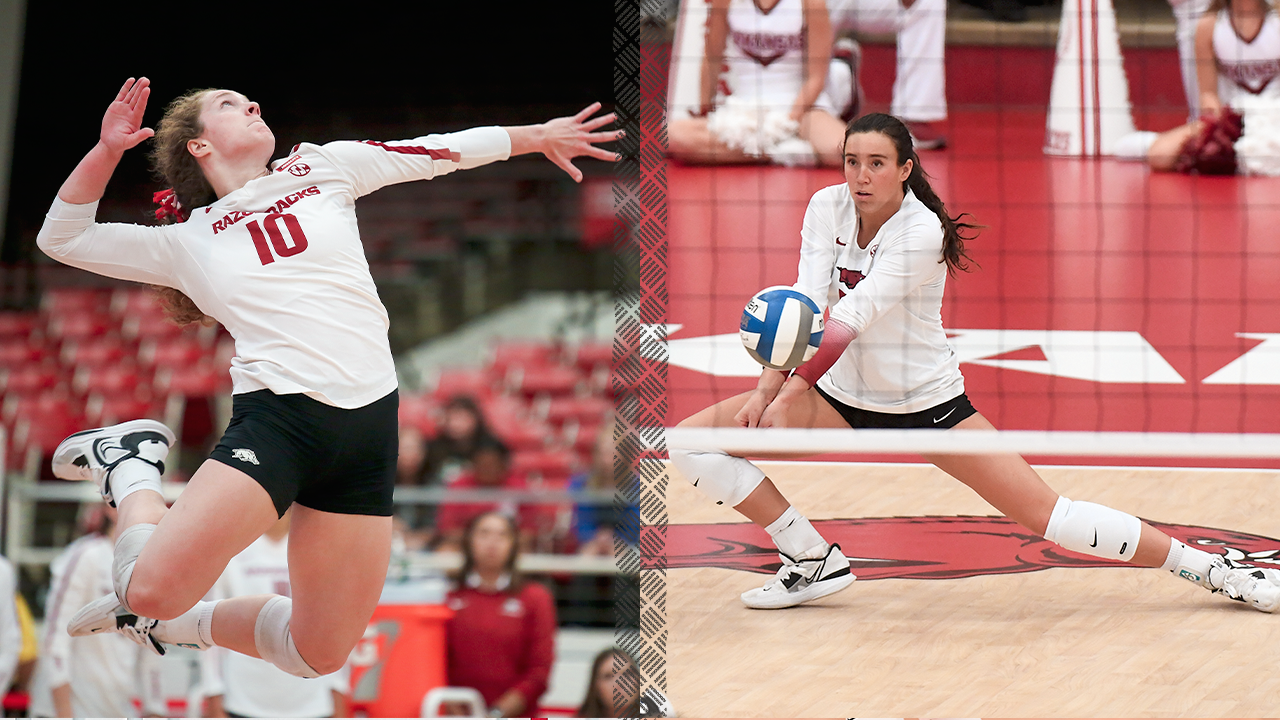 One day after wrapping up the regular season with a fifth sweep in a row, Jill Gillen and Taylor Head have received All-SEC honors.

It’s the fourth postseason SEC honor for Gillen in her four seasons at Arkansas, and first appearance for Head since she was named to the 2020-21 All-Freshman Team. This season marks the first in eight years that Arkansas has placed two honorees on the All-SEC list, apart from the freshman team.

Gillen led the Hogs in kills per set in the regular season with 3.67, also good for eighth in the SEC. She has had the team high in kills per set in each of her four seasons at Arkansas so far, and also moved into the career top 10 in total kills early in the year. Despite missing five matches due to injury, her current total sits at 1,527, fourth-best in program history.

Jill also led the Razorbacks in aces per set with 0.33, 28 total, seventh highest in the conference. Her career total is 131, good for fifth in the Arkansas record book and the top spot in the current scoring era.

She set new personal highs this season in single-match hitting percentage (.714) and blocks (6.0 vs. Alabama) also.

Head has been a huge piece of Arkansas’ offense this season, and is in first in total kills for the team with 363, 3.59 per set. She registered her 1,000th total kill in the team’s first match at Auburn, making her the 18th Arkansas player ever to achieve the feat, Gillen the most recent before her. She set a new career high in single match kills of 23 this season and did so twice, against Kentucky and Texas A&M.

Taylor is the Hogs’ second-most efficient hitter with a percentage of .281, which is the second-best mark among Arkansas’ outsides and the best percentage in her three seasons so far.

Also excellent on the defensive side of the ball, Head had 278 digs, second highest on the team. She recorded 15 double-doubles in the regular season and has 38 in her career, good for seventh in program history.

Gillen, Head and the Hogs are looking to represent Arkansas in the team’s first NCAA Tournament appearance since 2013. The Razorbacks will learn their postseason destiny on Sunday at 6:30 p.m. when the NCAA Volleyball Selection Show kicks off live on ESPNU.