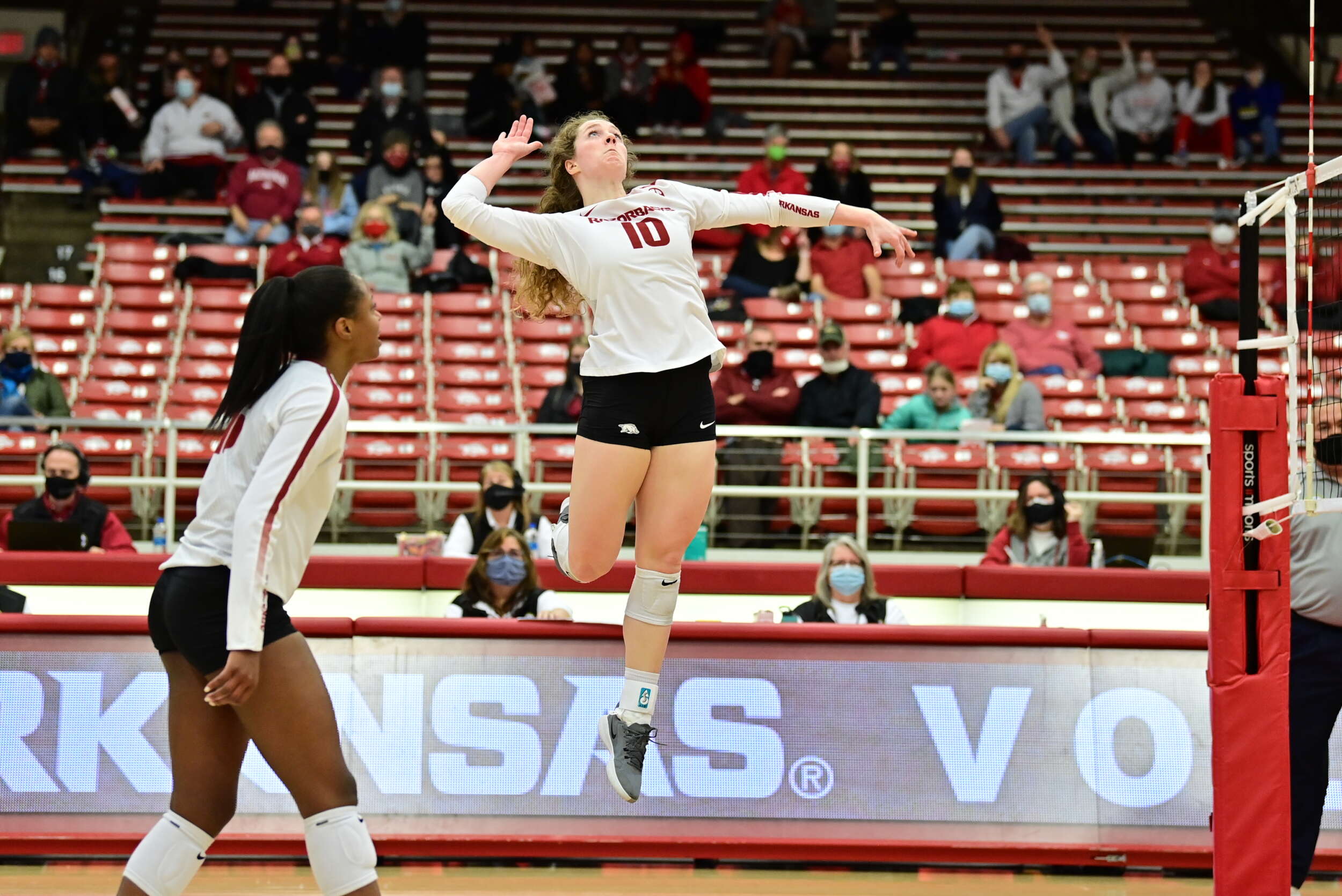 FAYETTEVILLE, Ark. – The University of Arkansas volleyball team had another exceptional defensive match on Saturday afternoon, recording 11 blocks and holding the Alabama offense to just a .164 hitting percentage over the course of four sets in the Razorbacks’ 3-1 victory. Arkansas improves to 10-4 overall with the 25-18, 25-17, 18-25, 25-21 win, while Alabama falls to 4-10 on the year.

Sophomore Jillian Gillen led the way for the Hogs with her 16th career double-double, backed by 19 kills and 16 digs. Gillen also recorded three blocks and a career-best five service aces.

Senior transfer Devyn Wheeler solidified her spot among some of the most efficient middle-blockers in the SEC, registering 12 kills on 20 attacks and committing no errors for a .600 hitting percentage against the Tide. Wheeler contributed seven digs, three service aces and three blocks as well.

The Hogs jumped out to a 5-1 lead early in the first set with back-to-back kills from Gillen. Alabama used an Arkansas service error to spark a 7-2 run and tie the score 10-10 nearly midway through the opening frame. The Razorbacks remained steady and posted three straight blocks to take a 15-11 lead at the media timeout. Out of the break, Arkansas held on to its lead and walked away with a strong 25-18 set one win.

Arkansas continued to battle in set two as the teams traded rallies until late in the set. Tied at 14-14, the Razorbacks went on to claim 11 of the final 14 points to secure a 25-17 set win and take a two-set advantage over Alabama.

Alabama opened the third set with a 5-0 run, capitalizing on two Razorback miscues. The Crimson Tide ultimately took the second set 25-18, forcing the Hogs to react and readjust in the break before the fourth set.

Remaining steady in their skills and in front of their home crowd, the Hogs kickstarted the fourth and final frame with an 8-4 lead, firing off five-straight points highlighted by kills from freshman Taylor Head and redshirt junior Hailey Dirrigl. Back-to-back service aces from Wheeler gave Arkansas a 15-8 lead at the media timeout, and after the break it was all Razorbacks. Alabama fought back, fending off three match points, but Arkansas looked to Gillen and she delivered with her 19th kill of the night to lift the Razorbacks over the Tide in the fourth set, 25-21.

Arkansas now hits the road for back-to-back road series, starting with a Thursday-Friday series at LSU next week (Feb. 18-19) and then a weekend series in Gainesville at Florida (March 5-6).