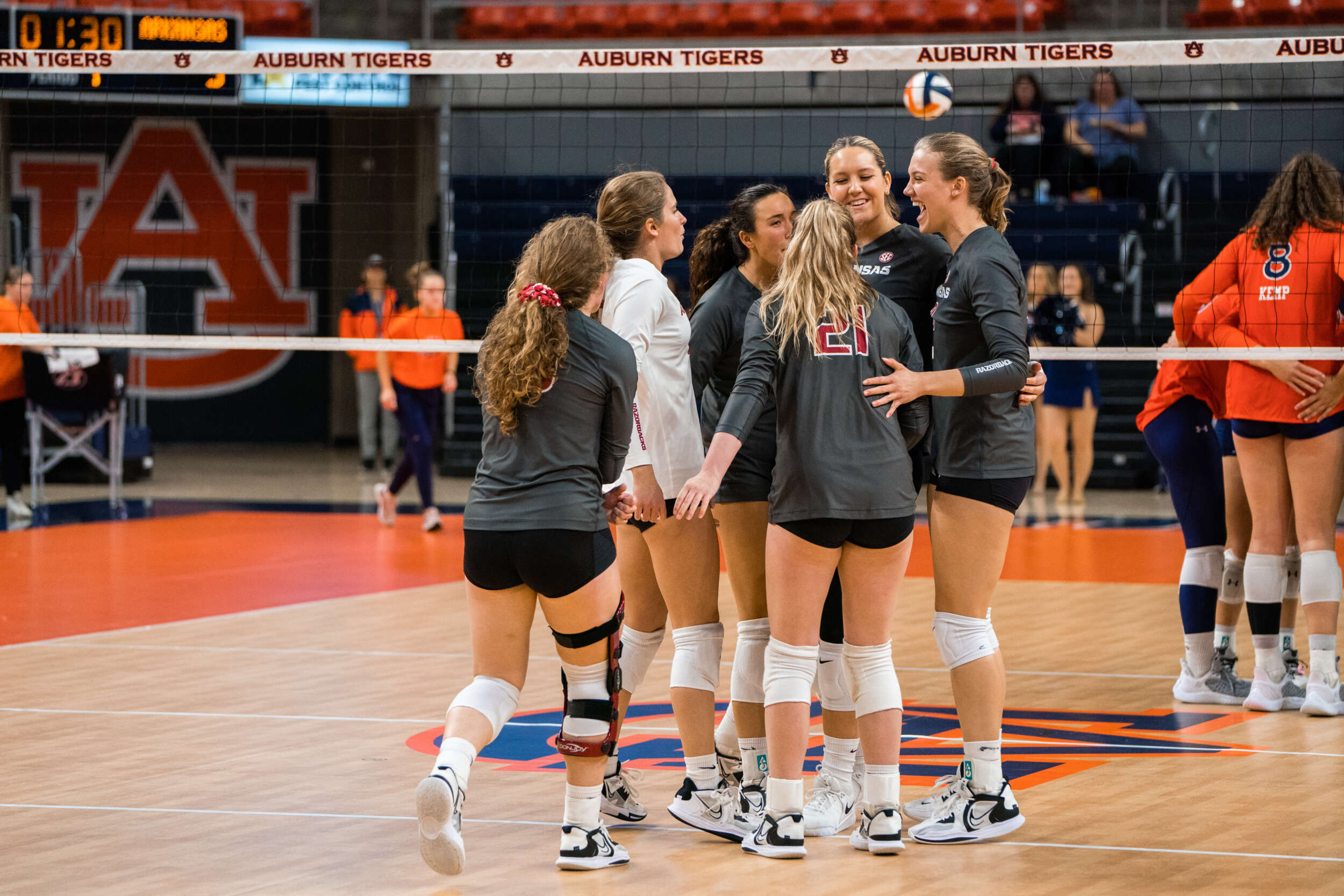 Hogs Break Out the Brooms on Black Friday

Arkansas got its final two matches of the regular season started with a bang as the Hogs took down the Auburn Tigers in straight sets on Friday.

The match was the fourth consecutive sweep for the Razorbacks, and the first time Arkansas won at Auburn since 2014. The Hogs held the Tigers to a .000 hitting percentage, the lowest for Auburn all season. The Razorbacks are now 19-8 on the season and 10-7 in conference, and the Tigers move to 21-7 and an even 10-7 with the Hogs in the SEC.

Junior Taylor Head had a team-high 12 kills and 10 digs for her 15th double-double of the season. Her eighth kill of the day pushed her to 1,000 in her career, and she is the 18th member of the Arkansas 1,000 kill club.

The Razorbacks had another great outing on defense with a dozen blocks, highlighted by former Tiger and grad transfer middle Tatum Shipes with five. Three other Hogs also had five blocks: Abigail Archibong, Jill Gillen and Maggie Cartwright.

Set 1
The two teams played tight to start and the score was tied four times. Auburn took a brief lead, but the Hogs answered with five straight points and went ahead 12-9. The Tigers came within two a couple of times, but the Hogs tacked on three more, including two kills from Head, for a 20-15 advantage. Auburn called time and scored three of the next four points, but Arkansas closed out the set with a four-point tear, capped by an ace from Courtney Jackson, for the 25-18 victory.

Set 2
The Hogs kept their foot on the gas for the second frame and got going with a 6-1 run early. The Tigers added three, but Arkansas responded with five unanswered, including a solo block by Gillen and an ace from Head, and Auburn took a timeout down 12-4. It was all Arkansas from there, and the Razorbacks went up by 12 at 19-7 following a dump kill from Gracie Ryan and an ace from Gillen. The Tigers tacked on two, but a four-point streak finished by Head’s 1,000th career kill to put Arkansas two away. Auburn got over double digits, but Cartwright closed it 25-10 in favor of the Hogs.

Set 3
Auburn found a rhythm in the third and quickly jumped out to a lead, but Arkansas settled in quickly and rattled off six points for a 9-7 edge. The Razorbacks limited the Tigers to one point at a time from there while a kill and an ace from Gillen extended the lead to four for Arkansas at 14-10. The momentum continued to break the Hogs’ way as they scored four unanswered at 19-12, and they kept the lead easily from there. Back-to-back blocks put the Razorbacks two away, and an Auburn attack error gave Arkansas set and match point. The Tigers spoiled it four times, which prompted a Razorback timeout. Auburn came within one, but a Tiger attack error ended it 25-23 for the Hogs.

Up Next
The regular season finale for the Razorbacks is set for Saturday, Nov. 26 at 7 p.m. in Auburn. The match will be streamed live on SEC Network Plus.