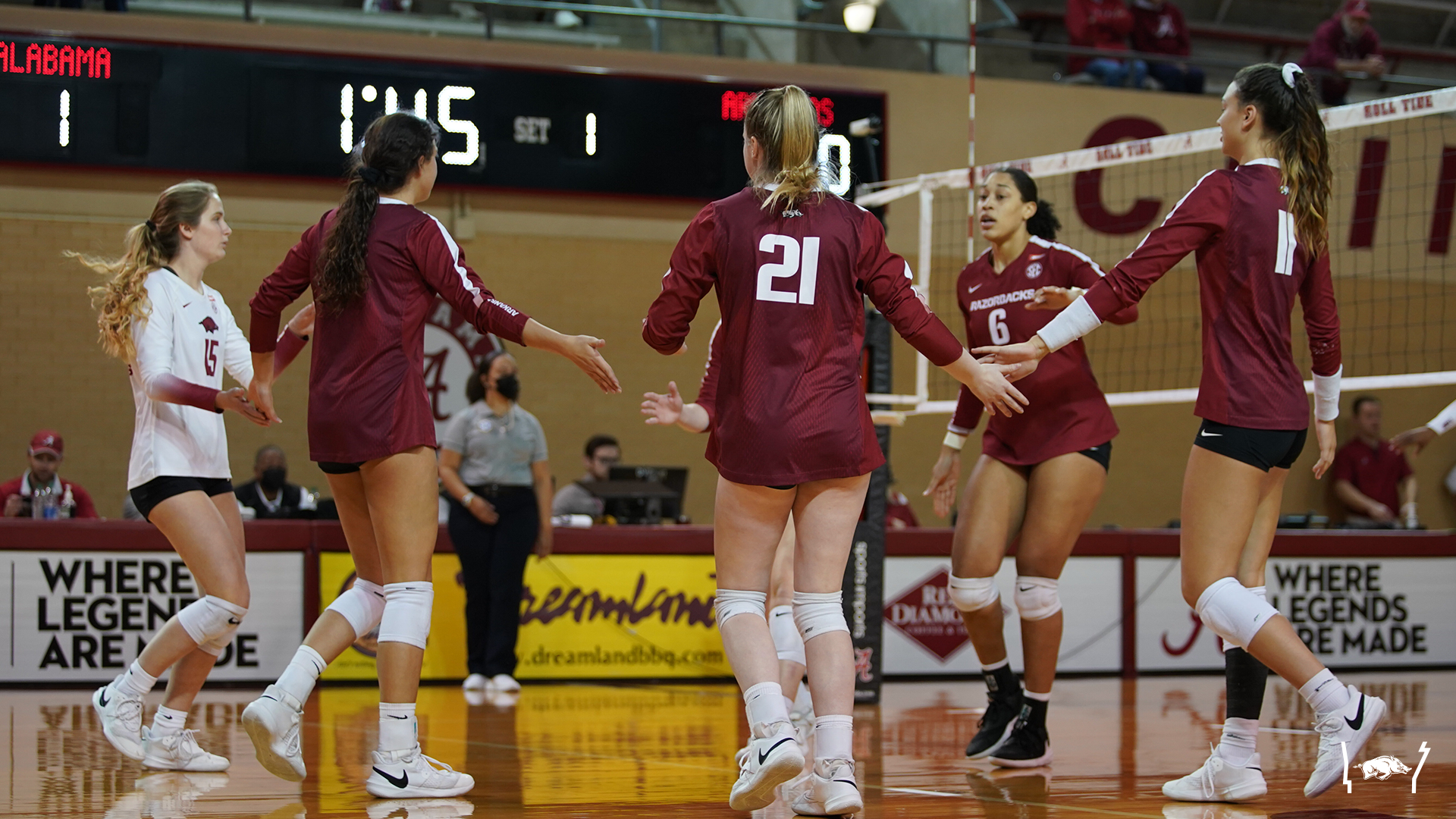 Arkansas battled back from a 0-1 deficit and won the next three sets to overcome the Alabama Crimson Tide 3-1 in Tuscaloosa on Saturday afternoon.

The match was the first in a pair between the two teams and brought the Razorbacks to 16-6 overall and 7-4 in the SEC this season. Alabama is now 10-15 and 2-11 in conference play.

Junior Jill Gillen led Arkansas on the day with 17 kills and 11 digs for a double-double, and she hit .351. Senior setter Gracie Ryan registered 44 assists and 10 digs for her 11th double-double of the season, a team best, and freshman libero Courtney Jackson had a match-high 15 digs.

The Hogs had a strong defensive day and put up 10 blocks in the match, the most in nearly a month. Senior middle blocker Ellease Crumpton led the team with six block assists and also contributed heavily on offense. She had eight kills on 12 swings for a match-high .583 hitting percentage.

The first set was back-and-forth to start between the two teams, and the score was tied eight times early on. The Tide began to break away with a two-point lead at 10-8 and hit the gas from there. Alabama scored five straight points and went up 15-9 at the media timeout. The Tide kept the momentum and extended the lead to 18-10, and while the Hogs strung together a couple of runs and came within two, they couldn’t overcome the gap and the Tide took set one 25-21.

Arkansas jumped out to a narrow lead in the second set, and while it was tight to start, the Hogs quickly found a rhythm and used a three-point run to go up 9-4. The Razorbacks carried the advantage and another trio of points capped off by an ace from Jackson made it an eight-point lead. Two kills from sophomore Taylor Head followed by two aces from junior Maggie Cartwright gave Arkansas its biggest lead of 23-9, and while Alabama tacked on two more, kills from Gillen and Cartwright closed the second 25-11 and knotted the match 1-1. The Hogs hit .429 to the Tide’s .074 in the set.

Alabama threatened early in the third set with a 6-3 advantage that held until Arkansas was the first to 10. Four points for the Hogs put them up 12-9 and sent the Tide to a timeout. Alabama added a point, but Arkansas tacked on another four-point run featuring two kills from Gillen, which extended the lead to 16-10. The Tide answered with three, but the Hogs countered with three of their own and held a six-point lead. Alabama stifled any long Arkansas runs, but ran out of time. Two kills from Head won it for the Razorbacks, 25-16.

The fourth set was the closest of the match, and neither team was able to gain more than a two-point edge through the 20th, and there were 15 tie scores in that span. The Hogs were the first to 20 off a kill from Cartwright and extended the lead to three with an ace from Gillen. Two kills from Head and an ace from senior Lauren Evans put the match in Arkansas’ hands up 24-19, but the Tide added four unanswered points to make it 24-23. The Razorbacks took a timeout, but Alabama fully shifted the momentum and pushed back for a 25-24 advantage. The Hogs avoided a fifth set with an ace from Cartwright and a kill from Head for the 27-25 set and 3-1 match victories.

Alabama and Arkansas meet again on Sunday afternoon for the series finale. First serve is set for 3 p.m. in Tuscaloosa and the match will be broadcast live on SEC Network, with live stats provided.