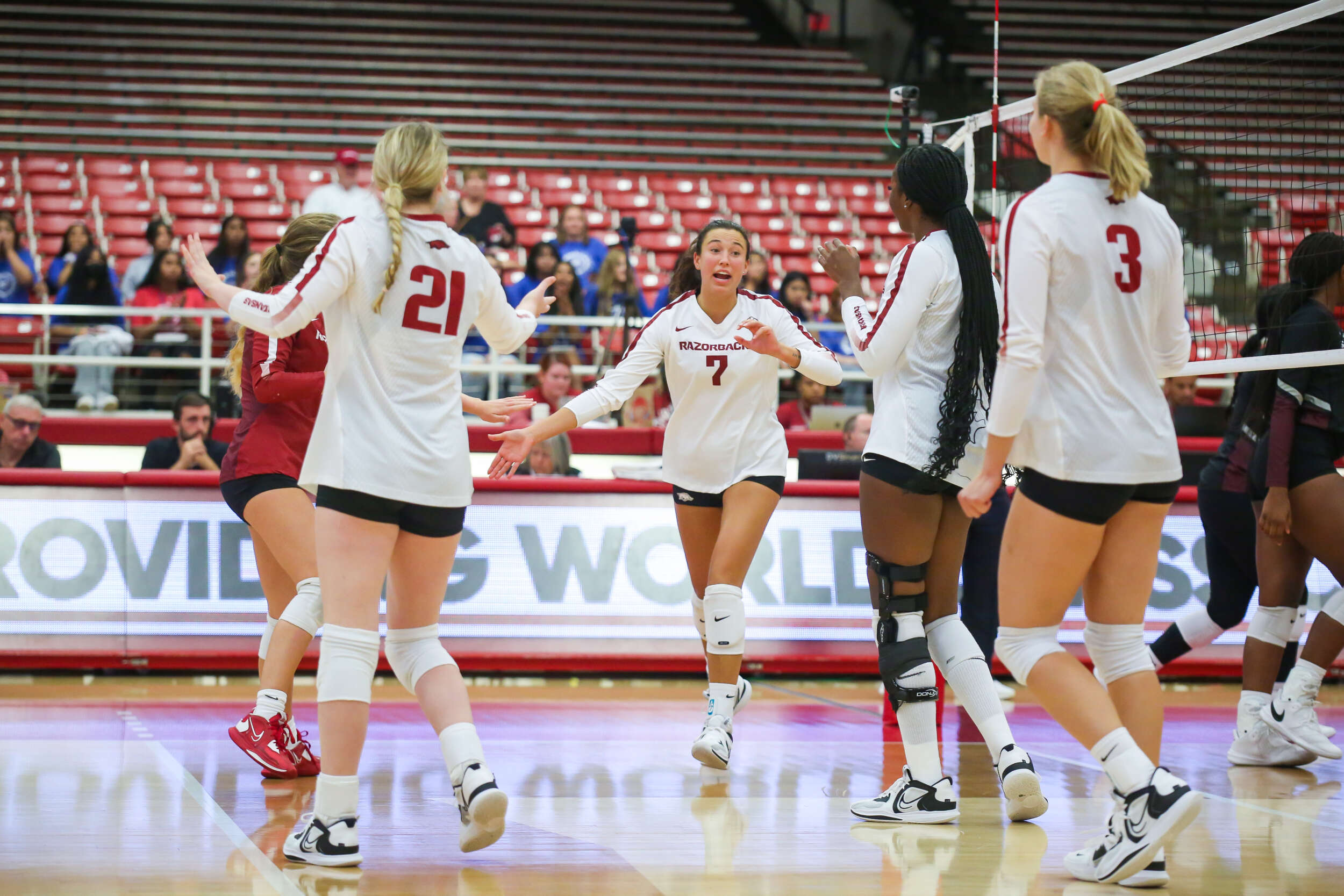 Hogs Continue Sweep Streak With Wins over Trojans and Panthers

The Razorbacks returned to Barnhill Arena for a pair of games on Friday and went 2-0 without dropping a set for the fifth consecutive match, with victories over Little Rock and Florida International.

It’s the first time that Arkansas has put together five consecutive match sweeps since the 2001 season, and the Hogs are currently 6-1 on the season.

Junior Taylor Head led the day for the Razorbacks and had 25 kills over the two matches with 11 digs in the first match for a double-double. Her .545 hitting percentage in the first match was a team high. Sophomore setter Hannah Hogue led both matches in assists with 48 total, and graduate setter Gracie Ryan had 26 assists and a double-double in match two with 12 digs.

In the Hogs’ match against Little Rock, they held the Trojans to a hitting percentage of .029, which is a new best for the team on the season. The Razorbacks also had eight service aces from four different players against the Trojans.

Match One: Little Rock
While the two teams played close to start, Arkansas hit the gas with a four-point run that featured back-to-back Jill Gillen aces and went up 9-5. After a Little Rock timeout, the Trojans tacked on three more points, but the Hogs fired back with five straight, capped off by a pair of Maggie Cartwright kills, which grew the lead to 16-8. Little Rock huddled again and regrouped with a 7-3 run, but the Hogs reached 20 first on a kill from Hailey Dirrigl. The Trojans spoiled set point twice, but the Razorbacks a Little Rock attack error closed it 25-18 in favor of the Hogs.

The Razorbacks rolled in the beginning of the second set with a 7-1 streak with a pair of aces from Head, which forced a Little Rock timeout. Arkansas kept the pressure on and extended the edge to 10 off a Cartwright kill, which made it 17-7. The Trojans added just one more point in the set, but the Hogs struck back with eight unanswered points, including two kills from Gillen, for the 25-8 set two victory. Arkansas limited Little Rock to a -.088 hitting clip in the set, the second-lowest percentage by the Hogs all season and the first time they’ve kept an opponent in single-digit points in a set.

The Trojans threatened for the first time early in the third set and led by two, but a four-point run spurred by a kill from sophomore Jada Lawson gave Arkansas a 6-4 advantage. The Hogs held the momentum from there and widened the gap to 10-6 off an ace from Tatum Shipes and Little Rock called time. The Trojans added three points, but the Hogs strung together five with two kills from Cartwright, one apiece from Lawson and Head and an ace from Courtney Jackson and went up 19-9. Little Rock went on a 4-2 run but couldn’t mount a large enough comeback, and three straight Arkansas kills sealed the third set 25-14 for an Arkansas match sweep.

Match Two: FIU
The Hogs and the Panthers kept it close in the second match of the day to start, but Arkansas went up by two at 15-13 off FIU attack errors at the media timeout. The Hogs widened the gap with a pair of kills from Gillen and Head for a four-point lead and the Panthers called time again. The teams traded points, but Arkansas limited FIU to only one at a time while another kill from Head gave the Razorbacks a 22-17 edge. FIU used its final timeout, but Arkansas went on a 3-1 run and kills from Gillen and Shipes closed out the first 25-18.

The Razorbacks hit the ground running immediately in the second set, and quickly grabbed a 6-1 lead. The Panthers tacked on four points from there, but the Hogs maintained a doubled-up lead at 10-5 off a Head kill. FIU then went on a 4-1 run to narrow the Arkansas advantage, which was answered by a Panthers error and Cartwright kill to make the lead four again at the media break. FIU cut the deficit to as little as one, but three straight Arkansas points put the score at 22-18, and the Panthers called time. FIU crossed the 20-point threshold and spoiled a set point for the Razorbacks, but an FIU attack error put it in Arkansas’ hands, 25-21.

Neither team led by more than two in the early points of the third set, but Arkansas capitalized on FIU errors to strengthen the lead and rattled off three straight points including a kill from Dirrigl and an ace from Ryan for a 15-9 advantage. Following the media timeout, FIU gained ground with five points, but Arkansas added four, which included two Panthers errors. FIU huddled again down 19-14, and while the Hogs were first to 20, the Panthers put pressure on and used a three-point streak to come within three. FIU threatened again after its last timeout and squashed three match points for the Hogs, but a service error made it 25-22 to complete the Arkansas sweep.

Up Next
Arkansas takes on Colorado in the Arkansas Invitational finale on Sunday, Sept. 11 at 1 p.m. at Barnhill Arena. Colorado is 2-0 so far in the tournament as well with two sweeps, and the Buffaloes have won 14 straight sets to Arkansas’ 15. The match will be streamed live on SEC Network+, and tickets are available online or in person.