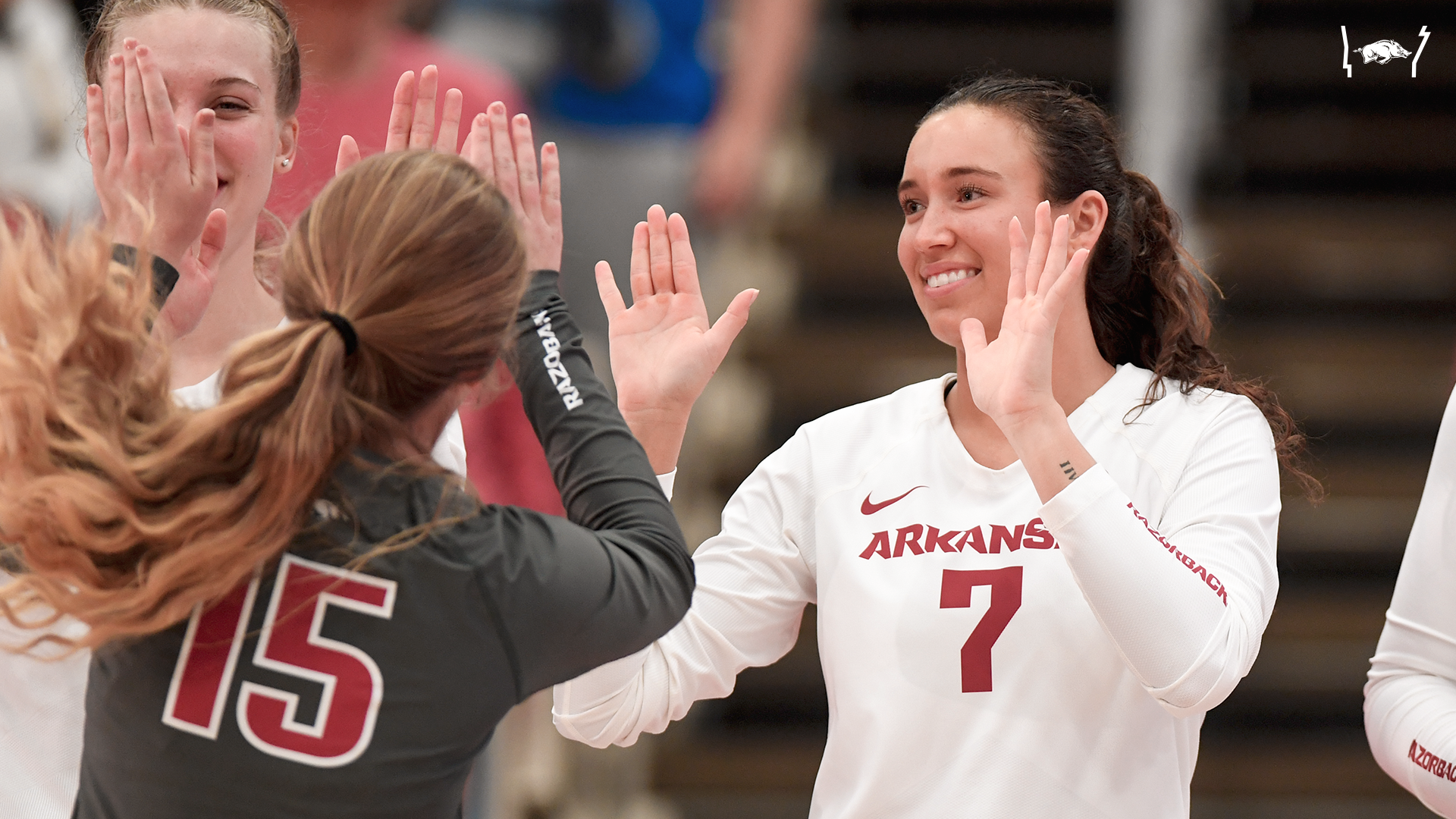 The Razorbacks returned to home court on Wednesday night and got themselves back into the win column with a sweep over South Carolina.

The Hogs are now 15-7 on the season and an even 6-6 in SEC play, while the Gamecocks are 10-11 and 4-7 in the league. The win was head coach Jason Watson’s 99th at Arkansas and 299th in his career, which puts him only one away from the triple-digit milestone with six matches remaining in the regular season.

Junior Taylor Head paced the Hog offense with a team-high 15 kills and 14 digs for a double-double. She had just one error on her 28 attempts for a .500 hitting percentage. Graduate middle blocker Tatum Shipes had a stellar outing defensively, and led the Razorbacks with 10 total blocks, her third double-digit blocking performance at Arkansas and second in as many matches. She also contributed six kills on 11 swings with no errors for a .545 hitting percentage.

Set 1
Arkansas used a three-point run and extended an early lead in the opening set to 8-3. The Gamecocks couldn’t generate any lasting runs, and an Arkansas block and kill by Maggie Cartwright gave Arkansas a 15-10 advantage heading into the media timeout. The Hogs kept their foot on the gas and a kill by Shipes and block by her and Head made it 20-14 Arkansas. South Carolina called time and traded points with the home team for the next six, but a kill from Head and two straight blocks from Cartwright and Zoi Evans ended the first 25-17 for the Razorbacks.

Set 2
The second set was tight to start and saw 11 ties through the midway point. Arkansas broke away for a couple and made it 17-15, but the Gamecocks didn’t back down. The Hogs went up again at 19-17 off a block and a kill from Hailey Dirrigl, but South Carolina answered with three straight points and took a 20-19 lead. Arkansas huddled and dialed in after that. Kills from Dirrigl and Head and two blocks, including one solo from Shipes, regained the lead for the home team at 23-20, and the Gamecocks took a timeout. They put up one more point, but back-to-back Hog kills finished off the second set 25-21 for Arkansas.

Set 3
The Razorbacks kept the momentum in the third and quickly cruised to a 6-1 lead. South Carolina called time but had no answer for Arkansas. Kills from Cartwright and Avery Calame made it an eight-point advantage at 11-3, and the Gamecocks used another timeout. The Hogs led by as many as nine points after that, and a Gamecock service error took Arkansas over 20. South Carolina went on a 6-2 run trying to catch up and made it 22-17, but the Razorbacks killed any chance of a comeback with a block, an ace from Shipes and a kill from Head for the 25-17 set victory and 3-0 match sweep.

Up Next
The Hogs are on the road again this weekend with a single match against the Georgia Bulldogs in Athens on Sunday, Nov. 6. Action begins at 3 p.m. CT and will be broadcast live on SEC Network.