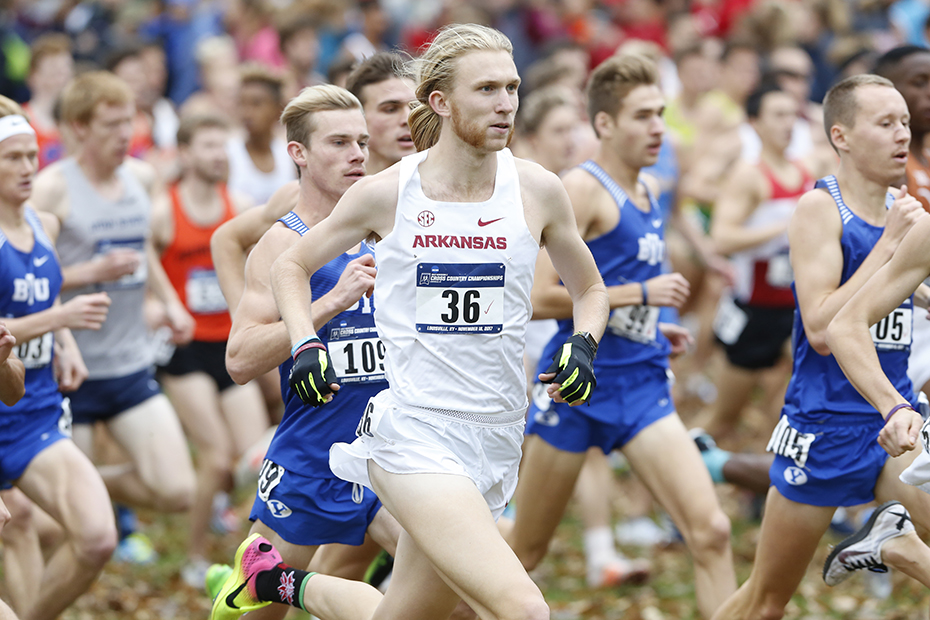 Arkansas’ ascent into the national top-five began at the Southeastern Conference Championships, a meet in which they won after being labeled as the 27th-best program in the country. Entering NCAAs ranked 15th in the national polls the Razorbacks pushed back against the 20mph hour winds to begin the race in 8th position. Arkansas improved its standing dramatically over the final 2K, climbing to a fifth-place team finish off the heels of three seniors, one junior and one freshman.

“Tough conditions today but I can’t tell you how proud I am of this team,” head coach Chris Bucknam said. “They did a phenomenal job. I think coming in ranked 15th and getting fifth, it’s just the character of our team. They gave everything they had and fought for every place, every position. I’m just so proud of them.”

Senior Leaders
Razorback seniors Jack Bruce, Austen Dalquist and Alex George paced the Hogs through the fast 10K course, finishing 13th, 43rd and 51st, respectively. It marked the third-straight year that Arkansas has placed three runners among the top 60 – a feat made more impressive when juxtaposed to the field size of about 220 to 250 runners per year.

“What a race Alex had considering some personal adversity this week,” Bucknam said. “It was a great race for Jack Bruce. I don’t know how many guys he passed on the final 800 meters but it was a lot of guys. Austen Dalquist had a breakthrough race. Just an unbelievable performance for him. We’re grateful for every meet we a chance to compete in and these guys gave their best effort.”

Jack Bruce to the Stage
A 2015 transfer from UALR Jack Bruce closed out his cross country career as a three-time All-American for the Hogs. Bruce finished among the top-25 fastest runners at the national meet in all three years in which he competed for Arkansas – his best finish at the final cross country national meet of his career. He earned his 2017 All-American honor, clocking a 10K personal best of 29 minutes, 39.50 seconds. It was first time under 30 minutes at that distance.

“2015 was a huge shock and a surprise for me,” Bruce said. “I don’t think anyone really saw it coming, including me. “2016 was mostly about proving that, the first national meet wasn’t a fluke and a big part of that was running with Alex [George] the entire way. We keyed off each other really well and had a good race strategy. This year the only thing that I wanted to do was go out with a bang and I think, literally and figuratively I did that. The last 2K I was prepared to put my body on the line to accomplish that. My time at Arkansas has been an honor and a privilege.”

With the cross country season wrapped up Arkansas will turn its attention to the indoor track and field season. The Razorbacks will open their 2018 indoor track campaign Friday, Jan. 12 hosting the Arkansas Invitational at the Randal Tyson Track Center.