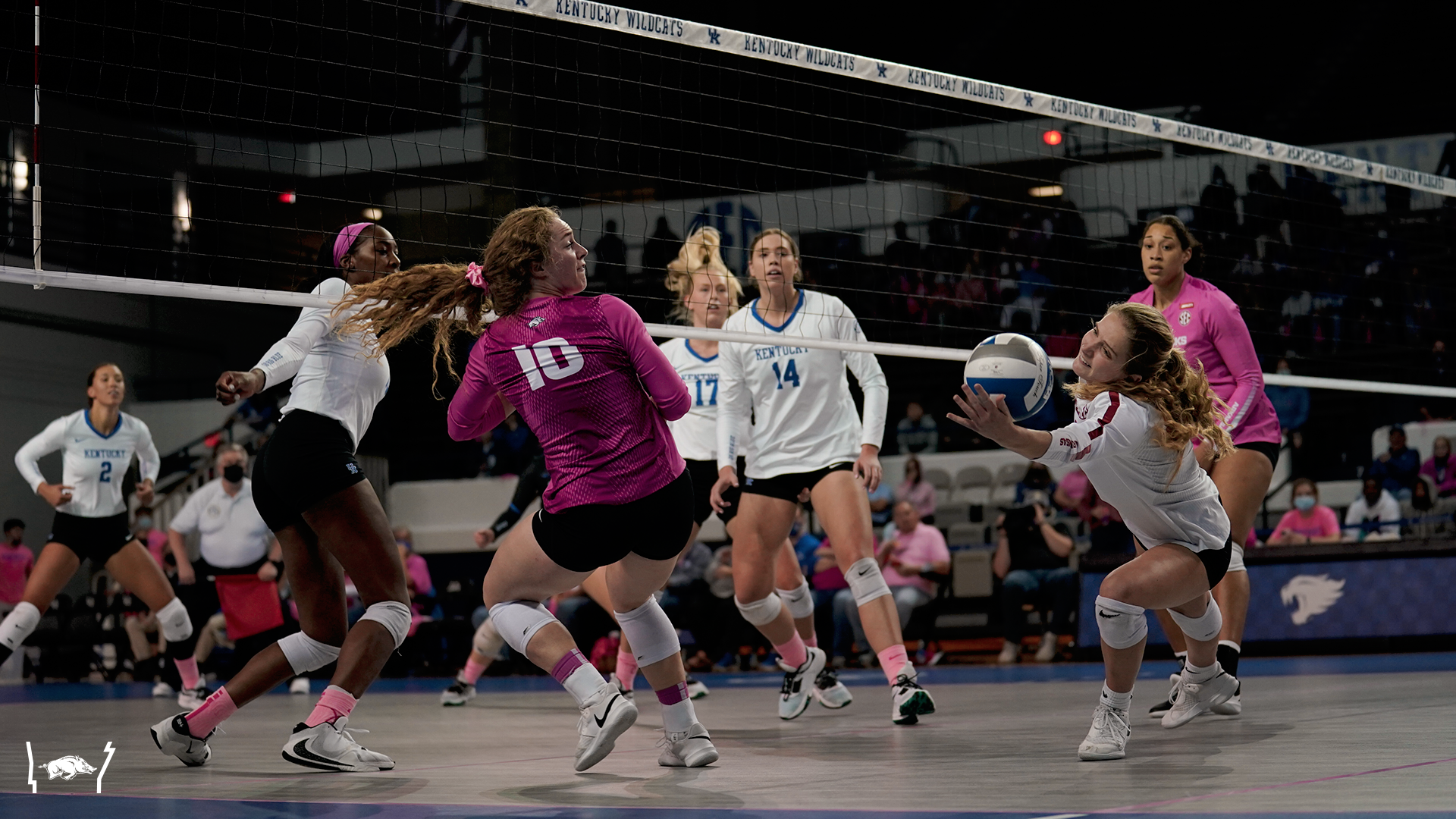 Hogs Lose a Heartbreaker in Five Against Wildcats

The Razorbacks went to Lexington with 37 straight set losses against No. 5 Kentucky. On Friday, they won two.

Arkansas battled back from an 0-2 deficit in the series opener against the reigning national champion Wildcats and won the third and fourth sets 27-25 and 25-19. The comeback fell just short as Kentucky took set five 15-8 and the match 3-2.

Wildcats remain undefeated in the SEC (7-0). The Hogs are now 14-5 overall and 5-3 in conference play. The two set victories are the first against Kentucky since 2013, the first in Jason Watson’s head coaching tenure, and the first for the Razorbacks in Lexington since 2012.

Junior Jill Gillen led Arkansas on the night with 17 kills. Sophomore Taylor Head added a double-double with 14 kills and 16 digs, a team high. Freshman setter Hannah Hogue saw her first regular season action for the Razorbacks and tallied nine assists, second to senior Gracie Ryan, who had 42. Ryan also had 42 digs for her 11th double-double of the season.

The two teams were closely-matched to start in the first set, and neither team allowed the other to score more than two points at a time until midway through, when Kentucky capitalized and gained a five-point lead at 15-10. Out of the media timeout, the Hogs added three points, which included a kill from graduate Hailey Dirrigl, and Arkansas stayed on Kentucky’s heels. The Razorbacks tied the score several times, until the Wildcats added two insurance points for set point. Arkansas couldn’t get anything going out of a timeout, and a Kentucky kill finished the set out 25-22 for the home team.

Kentucky came out fast and furious in the second set and quickly got an 8-2 lead. While the Hogs were able to stop the Wildcat run at points, they couldn’t create any of their own and never trailed by less than four from there. Arkansas took a timeout down 17-10, and while the Razorbacks added a point, the Wildcats tacked on three for another Hog huddle. Kentucky held Arkansas to just two more points and were the first to 25 for a 25-13 second set victory and 2-0 match advantage.

The third set was all Wildcats early, but the Hogs quickly gained momentum from two Kentucky attack errors and a kill from Gillen for a 6-6 tie. Kentucky regained and extended its lead to 13-9, but Arkansas put up five unanswered points for a 14-13 advantage, which sent the Wildcats to a timeout. It was a back-and-forth battle after that, but Arkansas gained a two-point cushion from a Kentucky error and kill from Cartwright and went up 20-18. The Wildcats pushed back and were within set and match point with a 23-22 lead, but the Hogs came right back and got a set point of their own up 24-23. Two kills from Gillen closed it out for Arkansas and sealed the team’s first set victory over Kentucky in eight years at 27-25, and put the Hogs back into the match.

Arkansas’ most dominant performance of the night came in the fourth set, but it didn’t come easily. The team used a four-point run highlighted by two aces from Cartwright and a kill from Gillen to pull away from Kentucky with a 15-12 edge.The Wildcats didn’t go quietly and limited the Hogs to two points at a time, but they couldn’t catch up. Arkansas extended its lead to 22-17 off of kills from Gillen and Head, and another from Cartwright brought set point. Kentucky added another, but Cartwright answered for the 25-19 win and to force a fifth.

The Razorbacks got the first point in the fifth and final set and kept it close early, but Kentucky took the momentum into the midway point with an 8-4 lead. Arkansas took a timeout down 10-5, but the Wildcats fired back with two more points. The Hogs got to eight, but Kentucky shut things down quickly and took the final set 15-8.

The two teams meet again Saturday for the series finale in Lexington at 6 p.m. The match will be streamed live on SEC Network+ and Kentucky will provide live stats.

Visit ArkansasRazorbacks.com for the latest information on all things Arkansas Volleyball. You can also find the Razorbacks on social media by liking us on Facebook (Arkansas Razorback Volleyball) and following us on Twitter and Instagram (@RazorbackVB).