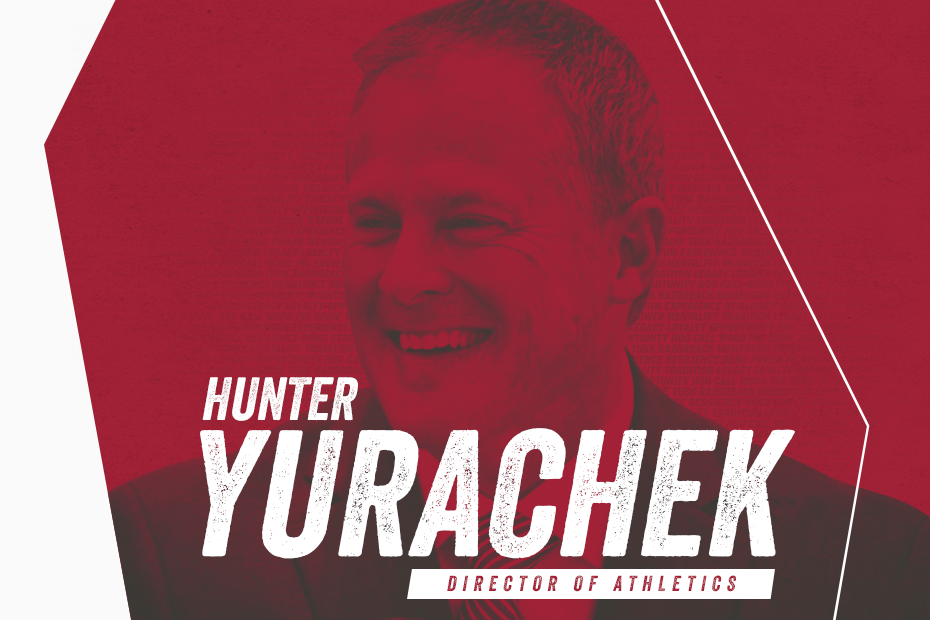 FAYETTEVILLE, Ark. – University of Arkansas Chancellor Joseph Steinmetz announced today the appointment of Hunter Yurachek as vice chancellor and director of athletics, effective immediately. Yurachek currently serves as the vice president for athletics at the University of Houston.

He will be formally introduced to the state and to members of the media later this week at a time to be determined.

“I am thrilled to welcome Hunter to the Razorback family,” said Steinmetz. “He possesses the experience, the management skills and the passion to have an immediate impact on our university. I know that as Razorbacks around our state and country get to know him, they will know that we are in good hands. We welcome Hunter, Jennifer and their children to Arkansas.”

“The opportunity to serve the Razorback program is both humbling and exciting,” said Yurachek.  “There is so much already in place, and we will quickly build on that foundation to win championships. We will do so with integrity and while continuing to be a great source of pride for the entire state of Arkansas.  I want to thank Chancellor Steinmetz and those involved with the search process. Jennifer, myself and our family cannot wait to join the Arkansas Razorback family.”

A native of Richmond, Virginia, Yurachek earned a bachelor’s degree in business management from Guilford College in 1990 and a master’s degree in sports administration from the University of Richmond in 1994.  He was a four-year letter winner in basketball at Guilford. Yurachek and his wife, Jennifer, have three sons, Ryan, Jake and Brooks.

“I want to thank the members of the advisory committee,” added Steinmetz.  “Lance Harter, Ben Hyneman, Gerald Jordan, Stacy Lewis, Peter MacKeith, Rick Massey and Bill Montgomery all who provided invaluable input into the search and candidates. I also want to recognize the excellent vetting and background work conducted on the final candidates by executive search firm Korn Ferry.”