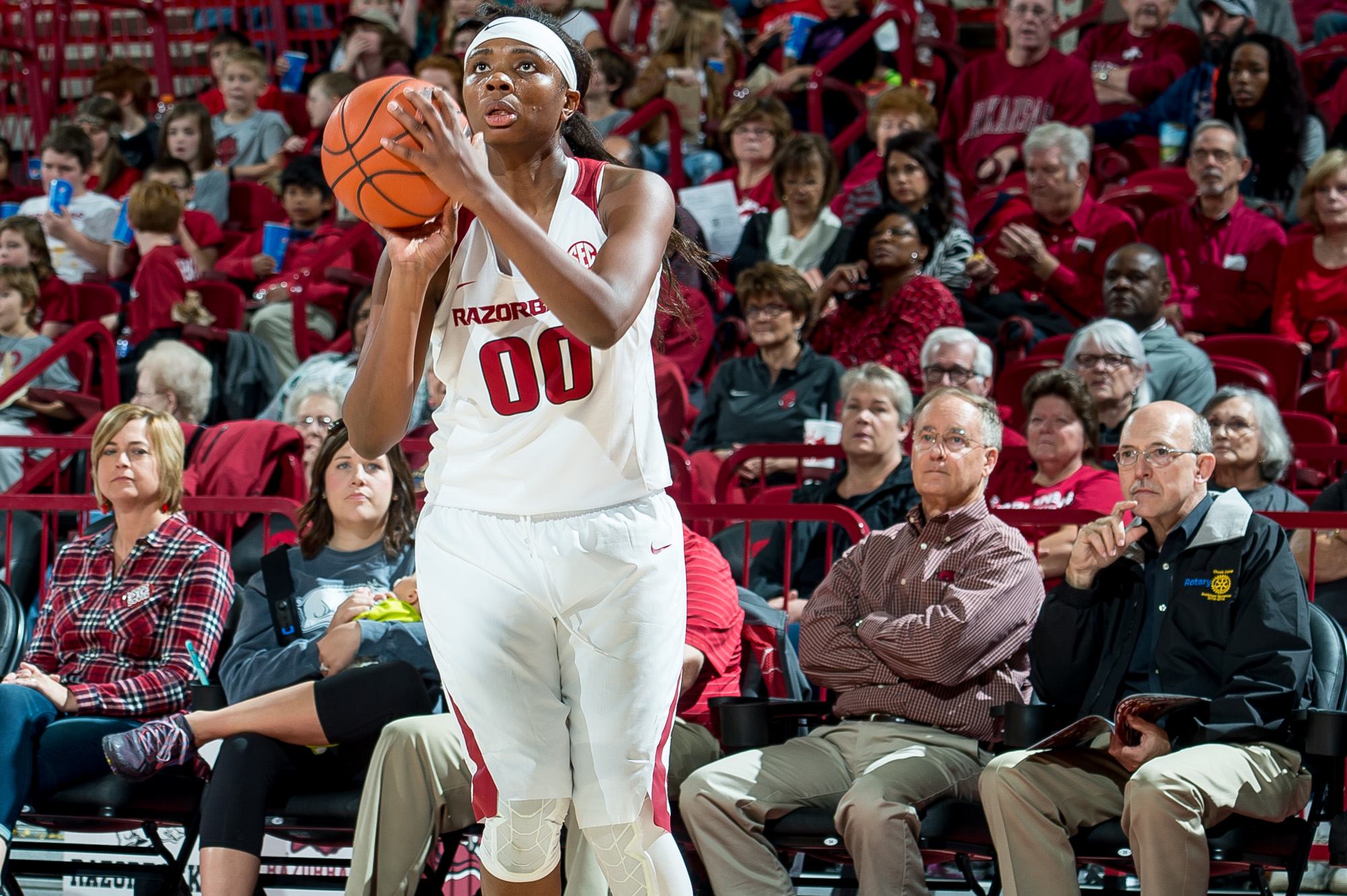 BATON ROUGE, La. – Jessica Jackson and Devin Cosper scored in double figures Thursday leading the University of Arkansas women’s basketball team to a 48-44 win over the LSU Tigers in Baton Rouge, Louisiana. The victory is the third in a row for the Razorbacks who move to 9-10 overall and 4-2 in the SEC.

Jackson finished with 15 points, her 16th double-digit effort. Cosper added 12 scoring in double figures for the 10th time as a Razorback.

Arkansas took a while to settle into a rhythm in the first period and went three minutes without a basket. The Razorbacks wanted to run but LSU was content to slow the pace and keep the game low scoring early.

The Razorbacks opened in a 2-3 zone and LSU was able to hit a couple jumpers from the corners early in the game. Arkansas moved to player-to-player defense after the media timeout and limited the Tigers’ looks but when LSU shot the ball, they converted and finished the first 10 minutes with a 14-7 lead.

Jackson heated up the second period keying a 5-for-5 run by the Razorbacks. The junior from Jacksonville, Arkansas, went 4-for-4 with three, three-pointers and a two-pointer from freshman Briunna Freeman to tie the game. The Razorbacks took the lead, 22-20, for the first time on a running lay in from Cosper with 4:33 to go in the second stanza and the teams traded baskets until the half ended in a 24-all tie.

Jackson had 11 points at the half but Arkansas finished 0-for-4 and didn’t score in the final 3:28 of the half.

The slow pace and scoring lapses continued into the third period for both teams. Neither team scored for the first 3:30 of the quarter but Arkansas woke up first going a 7-2 run to grab the largest lead of the game. The Razorbacks managed to outscore LSU 13-4 in the frame taking a 37-28 lead into the final 10 minutes of play.

LSU’s four-point output was the lowest for a Razorback opponent this season.

Arkansas held LSU without a basket for more than four minutes in the fourth in the slow-paced contest. Arkansas’ offense was sluggish in the fourth and LSU chipped away at the visiting Razorbacks using a steal, lay up and made foul shot to close within one point, 43-42.

With the shot clock running down, Cosper hit a deep three to give Arkansas some breathing room with 1:30 to play. Arkansas fouled a Tiger with 1:03 to play and two made free throws pulled LSU back to within two, 46-44. The Tigers pressed and slowed Arkansas up. Cosper drove with the shot clock in single digits and she was fouled.

She made one of two for a three-point, 47-44 lead with 38 seconds to play. LSU missed a shot and a jump ball was called giving LSU the ball with 20 seconds to go. LSU drove the lane and Arkansas fouled sending the Tigers’ best scorer to the line. She missed both bonus shots and LSU had to foul to get the ball back.

The Tigers had three fouls to give finally sending Cosper to the line for two with 12 seconds to play. Cosper hit one and LSU drove the court but missed their shot as Arkansas hung on for the 48-44 win.

NOTES
• Arkansas Starters: Jessica Jackson, Kelsey Brooks, Devin Cosper, Melissa Wolff, Alecia Cooley
• Arkansas’s 4-2 start in SEC play is the best conference start since starting the year 3-2 in 2010-11. Arkansas lost the sixth game moving to 3-3 to start SEC play that season.
• This is just the second time in 10 seasons that Arkansas has started conference play with four wins in the first six games
o Arkansas opened 5-1 in 2005-06 but lost the last nine games of the season that year
• Jessica Jackson had 11 points at the end of the first half.
o Jackson finished with 15
o It is her 15th game in double figures
• Sophomore Devin Cosper was in double figures for the 10th time in her Razorback career
• Arkansas held LSU to four points in the third period – the lowest point total in a quarter by a Razorback opponent this year
• Arkansas is on a three-game winning streak, tying the longest of the year
• Arkansas travels to Auburn Sunday for a 3 p.m. CT matchup with the Tigers
• Arkansas is the fifth youngest team in terms of returning scholarship players under the current head coach
• Arkansas opened the SEC season facing five ranked teams in the Associated Press Poll – the only team in the Big Five Conferences to do so
• The Razorbacks have three wins over ranked teams this year (No. 13 Texas A&M, No. 13 Tennessee, No. 24 Missouri)
• The last time Arkansas defeated three ranked teams in a season was 2011-12 (Vanderbilt, South Carolina and Tennessee [not all at home])
• It is the first time since 2001-02 that Arkansas has won back-to-back games over ranked opponents (2001-02 vs. No. 7 South Carolina, No. 8 Mississippi State)
• Arkansas has defeated six ranked teams under second-year head coach Jimmy Dykes
• Arkansas has faced seven teams who were ranked at the time the Razorbacks played them
• The Razorbacks will still face five teams who are ranked or mentioned in the AP Top-25 as of Jan. 19 — No. 22 Florida, No. 10 Mississippi State, No. 18 Tennessee, No. 23 Missouri and No. 9 Kentucky
• All-SEC candidate Jessica Jackson ranks third in all games and second in SEC-only games in scoring and is one of four players to rank in the top-16 in both scoring and rebounding in all games