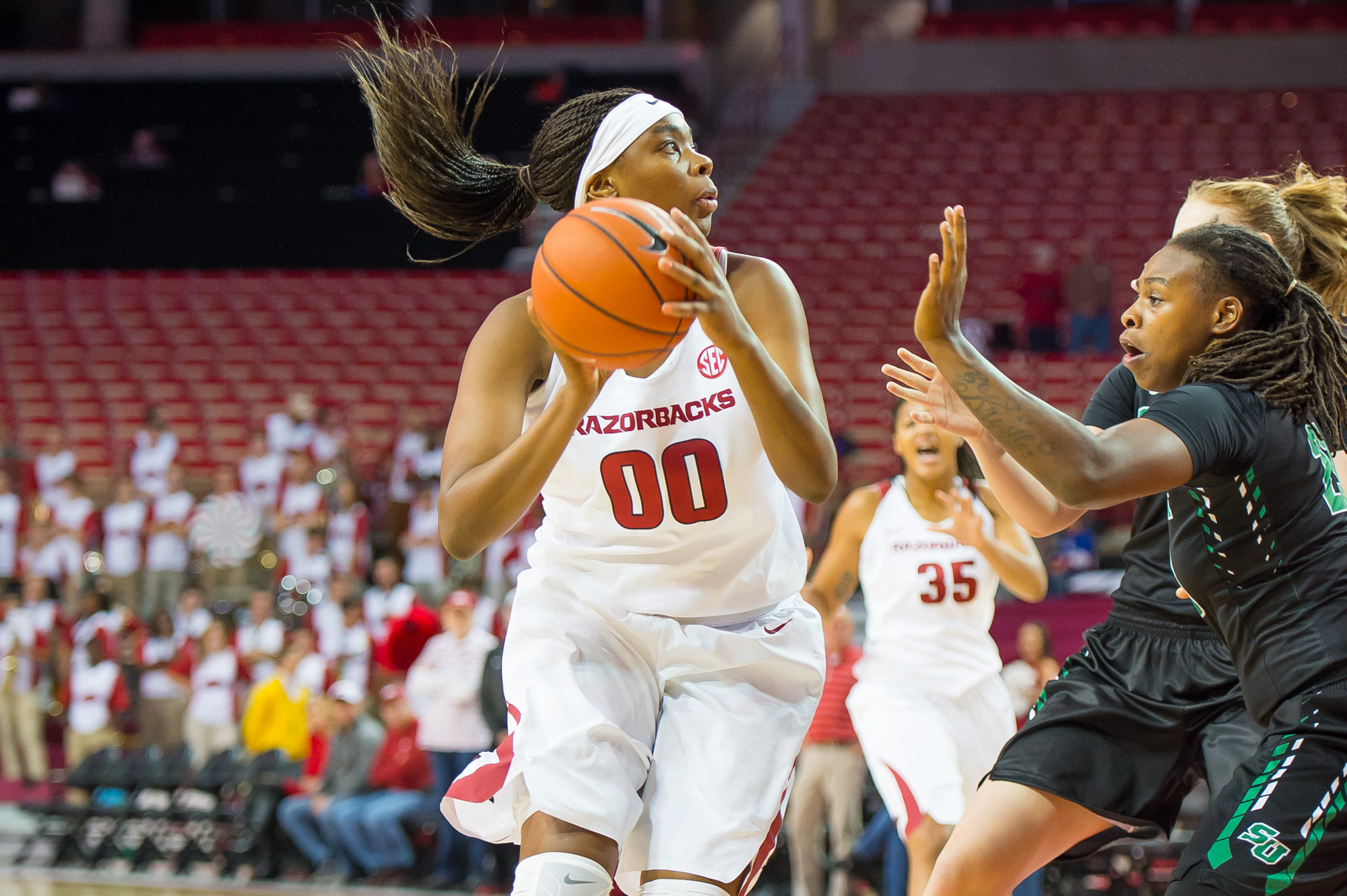 FAYETTEVILLE, Ark. – The University of Arkansas women’s basketball team never trailed and led by as many as 18 on the way to a 79-62 win over Stetson on Monday night in Bud Walton Arena. With the win, the Razorbacks (4-0) are off to their second 4-0 start in three seasons under head coach Jimmy Dykes.

Arkansas hits the road for the first time this season, traveling to Reno, Nevada, for two games in Nugget Classic against Memphis and Nevada or Navy on Friday and Saturday, respectively.

Key Moment
Leading 28-24 midway through the second quarter, Arkansas made back-to-back 3-pointers as part of a 6-0 run and opened up a 34-24 lead with 4:59 left in the first half. That four-point deficit was as close as Stetson would get the rest of the way, and Arkansas would stretch its lead to 45-29 by the end of the first half.

Key Stat – 45
For the third time in as many games this season, Arkansas won the rebounding battle, and it proved decisive in the win over Stetson. The Razorbacks pulled down 45 rebounds, including 14 offensive rebounds, compared to just two offensive rebounds and 18 total rebounds for the Hatters. Arkansas is now 26-7 when outrebounding their opponent under head coach Jimmy Dykes.

Notable
• Arkansas improves to 2-0 all-time against Stetson, having also defeated the Hatters in Fayetteville during the 2008-09 season.
• Stetson is the second of four Arkansas nonconference opponents, and 14 opponents overall, that played in the postseason in 2015-16.
• Arkansas denied Stetson from starting 5-0 for the first time in its school history.
• Arkansas has used the same starting five for each of the first four games: Malica Monk, Jailyn Mason, Jessica Jackson, Bailey Zimmerman and Alecia Cooley.
• Ten different players saw action and eight different players scored in the contest for the Razorbacks.
• McDonald’s All-American Aaliyah Wilson made her collegiate debut.
• Jessica Jackson scored 10 of her 19 points in the first quarter, her second career game with 10 first-quarter points, giving her double-figure scoring games in each of the first four contest this season.
• Malica Monk scored a career-high 18 points, including 10 points in the second half. She was 6-of-10 from the floor and a perfect 6-of-6 from the free-throw line.
• Alecia Cooley pulled down a team-high nine rebounds, while Malica Monk dished out a team-high four assists to go along with her career high in points.
• Arkansas is off to a 4-0 start for the second time in the three seasons under head coach Jimmy Dykes. The Razorbacks won the first six games to start the 2014-15 season.
• Arkansas improves to 23-10 in home games, including 15-5 in nonconference home games, under head coach Jimmy Dykes.
• Arkansas never trailed and was tied with Stetson for just 0:37. For the season, Arkansas has led for 149:05 of 160:00 minutes played. Arkansas has been tied for just 3:54 and has trailed for just 7:01.

Quotable – From Jimmy Dykes
“The big emphasis was rebounding the basketball, and we outrebounded them 45-20. We imposed our will against them on the inside at times. We had balanced scoring, we moved the ball well, and I continue to be pleased with our defense.”

Quotable II – From Malica Monk, on her shooting night
“I really didn’t recognize it the whole game until I looked at the stat sheet at the end of the game. That was a surprise.”

Up Next
Arkansas travels to Reno, Nevada, for two games in the Nugget Classic against Memphis and Nevada or Navy on Friday and Saturday, respectively. The Razorbacks will also play at Tulsa on Nov. 30, in a game televised on Cox Sports, before returning home to Bud Walton Arena for an SEC/Big 12 Challenge matchup with Texas Tech on Dec. 3.