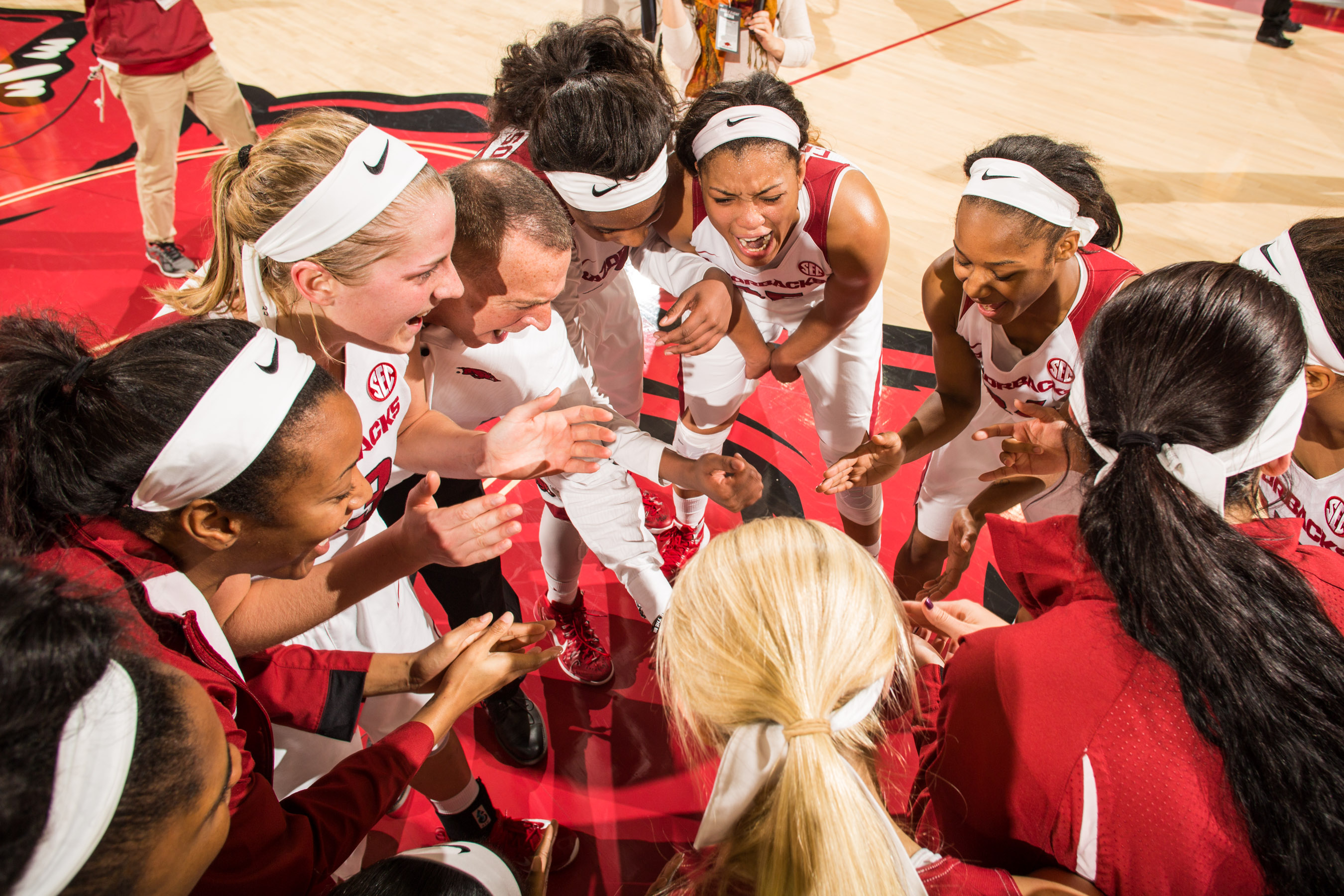 Jackson Leads Arkansas Past No. 13 Tennessee

FAYETTEVILLE, Ark. – Junior Jessica Jackson led three players in double figures with 25 points to lead the Arkansas women’s basketball team to a 64-59 win over No. 13 Tennessee at Bud Walton Arena Thursday night on the SEC Network.

Arkansas moves to 7-10 overall and 2-2 in the SEC, vaulting up the standings into a tie for fourth place. The Razorbacks have knocked off two ranked teams this year, defeating No. 13 Texas A&M last Thursday proving that No. 13 and Thursdays are lucky for Arkansas.

The win is also the first over the Lady Vols in Fayetteville since 1996, and only the third ever against Tennessee.

Jackson dropped in 25 points scoring 20+ points for the seventh time this year. She was joined in double figures by Devin Cosper with 11 and Jordan Danberry with 10 in the win.

Arkansas trailed Tennessee at the half, 32-21, after being outscored 16-6 in the second period. The Razorbacks opened the game on a 5-0 run in the first two minutes of play. They held Tennessee without a basket for 3:36 while going on a 6-0 run to lead late in the first period. The Lady Vols hit a three with 0:59 to play in the stanza to take a one-point, 16-15 lead in the back-and-forth battle.

The second period started slowly and the teams remained even until Arkansas suffered through a 3:30+ minute scoring lapse combined with a 7-0 Lady Vols run. Jackson heated up and had six points in the period but Tennessee put together a 9-0 run to end the stanze. Jackson had eight at the break, followed by five from Cosper but the 16-6 run by Tennessee put the Razorbacks in a big hole after the first 20 minutes.

Arkansas opened the third frame on a 9-0 in the first 2:30 forcing a Tennessee timeout after the Razorbacks erased an 11-point halftime lead. Cosper hit a big two and Jackson scored five quick points to lead the charge.

The Lady Vols went 3:28 without a basket going 0-for-7 as Arkansas retook the lead in a fast-paced and physical game. Tennessee committed three consecutive turnovers allowing a run by Arkansas and Melissa Wolff took a charge with the game tied again at 38 to swing the momentum back to the Razorbacks.

The crazy pace saw turnovers by both teams until Jordan Danberry got a deep steal, passed ahead and Jackson hit the lay in and the bonus shot giving Arkansas the 41-38 advantage late in the frame. A UT miss saw Cosper grab the board and drive the length of the floor for a scoop layup bringing the fans to their feet in Bud Walton Arena.

Arkansas outscored UT 22-8 in the third and the pace continued to favor the Razorbacks in the fourth period as they stretched the lead to as many as eight by the five-minute mark. The Lady Vols were slowed by a more than seven-minute scoring drought that featured five turnovers allowing an 8-0 Razorback run.

Tennessee had some fight left in them late in the game, closing the gap to three points, 60-57, as they heated up from three-point range. The Lady Vols would hit a three, then foul Arkansas allowing the Razorbacks only two points at a time. Arkansas hit the bonus shots down the stretch and hung on for the win.

NOTES
• The win over Tennessee is just the third all-time against the Lady Vols
• The win is the second-ever in Fayetteville – the first time was in 1996
• The most recent win over UT (prior to tonight) was in 2012 in Knoxville in overtime
• The win is the second for the Razorbacks against a ranked opponent this year
• The victory is the fifth win over a ranked team in the year-plus under head coach Jimmy Dykes
• Arkansas has outscored six opponents in the first half – all wins by the Razorbacks
o The Razorbacks trailed Tennessee at the break. It is the first win for Arkansas this year when trailing at the half
• Arkansas has been tied with or out-rebounded 11 of 17 opponents
• Arkansas has had fewer turnovers in 11 of 17 games this year
o Arkansas forced 24 UT turnovers while having just 17 of their own
• The combination of Jessica Jackson, Kelsey Brooks, Devin Cosper, Melissa Wolff and Alecia Cooley have played a team-high 56:00 minutes together
o This combination has scored 113 pointss – the most of any combo for Arkansas
o Jackson, Devin Cosper, Wolff, Cooley and Jordan Danberry are a close second with 47:42 minutes played together
• Jackson has scored in double figures in 14 of her 16 games
o She has seven 20+ point games
o She has 11 with 15+ points
o She has three double-digit rebounding games
o Three double-doubles
• Sophomore Devin Cosper has scored in double figures in eight games
o Her 11 points against Tennessee is the fourth time she has amassed that number
• Freshman Jordan Danberry recorded her fifth double figure scoring game
o It is her second consecutive game with double digits

UPCOMING PROMOTIONS
Sunday, Jan. 17th | Missouri | 2 p.m.
• Pack The House Challenge- Dollar Day- all tickets are $1. Fans will receive $1 admission.
• Sunday Funday- Kids 12 and under receive complimentary admission with a paying adult.
• We Back Pat game – please wear purple in support of Alzheimer’s awareness
Thursday, Jan. 28th | Florida | 7 p.m.
• Student Appreciation Night- Students will have the chance to win prizes throughout the night via Social Media
• Faculty and Staff Appreciation- All UA Faculty and staff will receive complimentary admission for (2) with the showing of valid UA ID.
• Flight Giveaway- One fan and one student will win a round trip ticket to anywhere in the continental United States.
Sunday, Jan. 31st | Mississippi State | 2 p.m.
• Junior Spirit Day- Girls of all ages will participate in a cheer/pom clinic pregame and then perform routine during halftime.
• Diaper Derby- Local babies 18 months and under will participate in the 2nd annual Diaper Derby during Halftime.