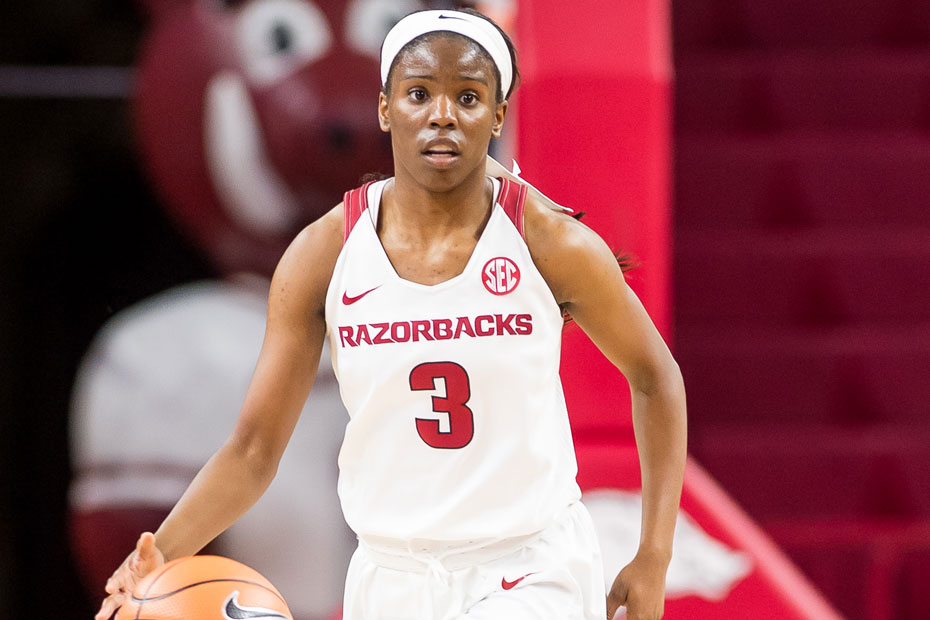 LAWRENCE, Kan. – The University of Arkansas had three players in double figures and a fourth player with double-digit rebounds but couldn’t overcome scoring droughts in a 71-60 loss at Kansas as part of the Big 12/SEC Challenge.

Arkansas falls to 5-3 on the year while Kansas moves to 7-0. The loss drops the Razorbacks to 2-2 in the conference challenge series.

Junior Malica Monk finished with 21 points, seven rebounds and five assists in 32 minutes of play. Graduate student Devin Cosper added 17 points and the Razorback guards have scored in double-figures for the eighth consecutive game. It was the fifth game in which Monk has scored 20+ points this year.

Sophomore Jailyn Mason finished with 10 points, her third double-figure game of the year and her second consecutive game with 10 or more points. Sophomore Kiara Williams added a career-best 16 rebounds for the Razorbacks.

Early foul trouble for Monk and Mason forced Arkansas to shuffle the lineup in the opening minutes of the first quarter. The teams played even until Kansas put together a 9-0 run after the media timeout allowing the Jayhawks to double-up the score. A couple of free throws and a buzzer-beating 3-pointer by Keiryn Swenson made it a four-point KU lead at the quarter break.

Arkansas closed the gap to five points, trailing 46-41, late in the third quarter after a good offensive start to the half. KU outscored Arkansas 4-2 in the final 1:45 to take an eight-point lead into the final frame.

Cosper and Monk both reached double figures in the third quarter and Williams had a game-high 11 rebounds after the first 30 minutes of play.

Mason drained a 3-pointer with just over six minutes to play in the game, pulling Arkansas within four points, 55-51. Kansas answered with back-to-back put backs and led by six points, 59-53, at the media timeout.

Arkansas battled to single digits twice in the final minutes of the game but the Jayhawks controlled the paint for much of the contest including 10 points from close range in the fourth quarter. Arkansas had a distinct size disadvantage and Kansas finished the game with 42 points in the paint and 11 second-chance points.

Notes
• Arkansas is 2-2 in the SEC/Big 12 Challenge.
• Arkansas moves to 4-4 all-time against Kansas and Mike Neighbors is 0-1 against the Jayhawks.
• Arkansas has had the same starters in every game this year: Malica Monk, Kiara Williams, Jailyn Mason, Devin Cosper and Bailey Zimmerman.
• Devin Cosper and Malica Monk both reached double figures in the third quarter. It is their eighth consecutive game in double-figure scoring.
• Kiara Williams grabbed her 10th rebound of the game in the third quarter. It is her third career game with double-digit boards and she finished with a career-best 16 boards in the game.
• Jailyn Mason scored in double figures for the third time this season and for the second consecutive game.
• Arkansas forced double figure turnovers for the eighth time this season.

Up Next
The Razorbacks return home hosting Charlotte on Thursday, Dec. 7. It is the first of three consecutive home contests for the Razorbacks as they host Tulsa on Dec. 10, and UT-Arlington on Dec. 17. Arkansas travels to Arizona State on Dec. 21, in the final game before the holidays.