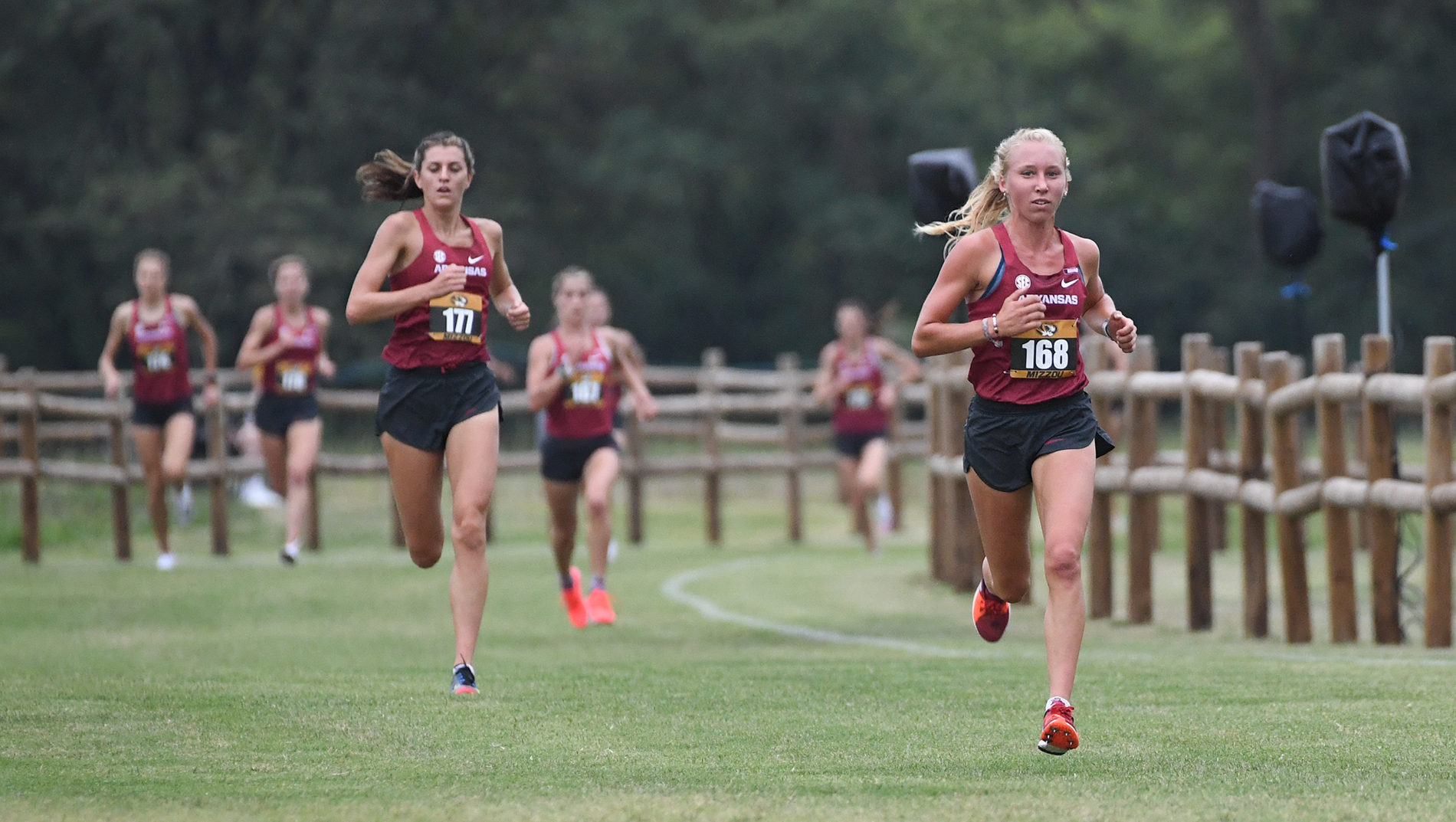 COLUMBIA, Mo. – Arkansas started the cross country season with a perfect score to win the Missouri Opener on Friday morning. Lauren Gregory led the Razorbacks, winning the 5,000m distance in 16 minutes, 54.4 seconds, among a field of 45 runners.

“It was great to see the conference course again and just get the rust out of us,” said Gregory. “It’s always fun to dominate a course and see where we’re at as a team and just get the energy going.”

Arkansas totaled 15 points with its first five finishers on the way to producing the top seven finishers on the Gans Creek course, which will serve as the host site for the SEC Championships in October.

Finishing behind the Razorbacks were Missouri with 68 points, followed by Vanderbilt (74) and Kentucky (84).

“That’s what was really exceptional,” noted Arkansas women’s head coach Lance Harter. “We have some veterans that had really good track seasons and took that momentum into our cross country season. So, that was a huge step.

“I think it surprised some of our newcomers a little bit, or even some of the team that was here last year. Our depth is exceptional compared to year’s past. And that’s without three of the big-name recruits we brought in.”

Finishing second in the race was Kennedy Thomson in 16:58.4 while All-America Krissy Gear clocked 17:02.1 for third place. Thomson bettered her previous best of 17:47.0 over a 5,000m course from last season as well as her 5k split on the Gans Creek course during a 6k race in October of last year.

“Lauren is a tremendous talent, the whole secret for her is to stay healthy,” noted Harter. “Her instincts will take care of the rest.”

Carmie Prinsloo, a freshman newcomer from South Africa, finished fourth among the Razorback squad in 17:10.5 while Meghan Underwood posted a best of 17:12.1 to place fifth and complete Arkansas’ perfect score.

Underwood continued her progression of improved cross country times from last fall, bettering her 17:47.0 from the opening 5k race last year along with the 17:20.2 5k split from a 6k race on the Gans Creek course.

“Our whole team kind of interchanges positions,” said Harter. “Meghan Underwood had a great improvement and those are the type of progressions we’re able to harvest to our advantage.”

Isabel Van Camp and Julia Paternain finished sixth and seventh for Arkansas, producing times of 17:16.6 and 17:19.5 to improve their respective career best times on a 5,000m course by 15 and 30 seconds.

“They’re not super fit yet,” stated Harter of the group overall. “But they have a great attitude and team atmosphere. I think that’s going to help us a lot as the season continues.”

Grace Jensen of Vanderbilt was the first non-Razorback to finish, placing eighth in 17:21.2.