SCOTTSDALE, Ariz. – Arkansas freshman Manuel Lozada, who was on track to be the clubhouse leader in the morning wave, fired a 1-under-par 69 in the opening round of the NCAA Championships, played Friday at Grayhawk Golf Club’s Raptor Course, and he ultimately tied for 17th after 18 holes. His round and a pair of birdies coming home by Tyson Reeder led the Razorbacks to a 7-over-par round of 287 to tie for 10th.

Arkansas will once again play with Texas Tech, the leader after round one, and San Diego State (T8th) in round two. However, the teams will start on hole 10 and be in the afternoon wave with the first tee time set for 1:52 pm (CT)/11:52 am (PT).

“It wasn’t the greatest start we could hope for, but I thought we played OK,” said head coach Brad McMakin. “We didn’t finish very well but we also didn’t shoot ourselves out of it yet. We will need to come back and play two good rounds, which I think is very doable. I think after having a second day to get used to the course today will be important for tomorrow and moving forward. Manuel (Lozada) played great ad Tyson (Reeder) closed well.”

Lozada started with a bang as he chipped in from short of the green on hole one. He got to 2-under after a birdie on the 562-yard, par-5 4th. After dropping a shot on the seventh hole, he made the turn at 1-under. He then opened the back nine with birdies on holes 10 and 12 to get to -3. Lozada reeled off five straight pars to sit atop the leaderboard before his double bogey finish.

“Manuel really played well other than that one mistake on 18,” McMakin said. “It was 17 great holes for his first national championship. To shoot 69, I mean, he played really hard. He chipped in for birdie on his opening hole to set the tone and then hit two of the best shots I’ve seen in while on holes 10 and 12 for birdies.”

Reeder had an up-and-down round with just two pars on the front nine, but he still managed to make the turn at +2. He then had bogeys on holes 10 and 13. The graduate senior responded with a birdie on the 430-yard, par-4 14th and closed with a birdie on the difficult 18th, a 520-yard par 4, to finish tied for 55th.

William Buhl is tied with Reeder at +2 (72) and in 55th place. He opened with a bogey and had a bogey on the seventh hole. Buhl posted back-to-back birdies on holes 12 and 13 to get to even for the day only to finish with a pair of bogeys. 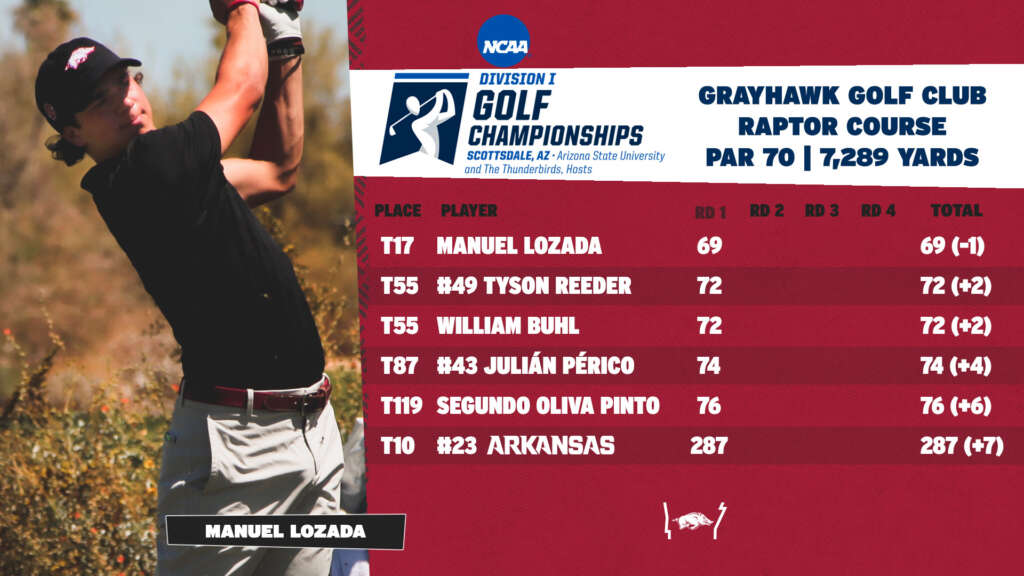