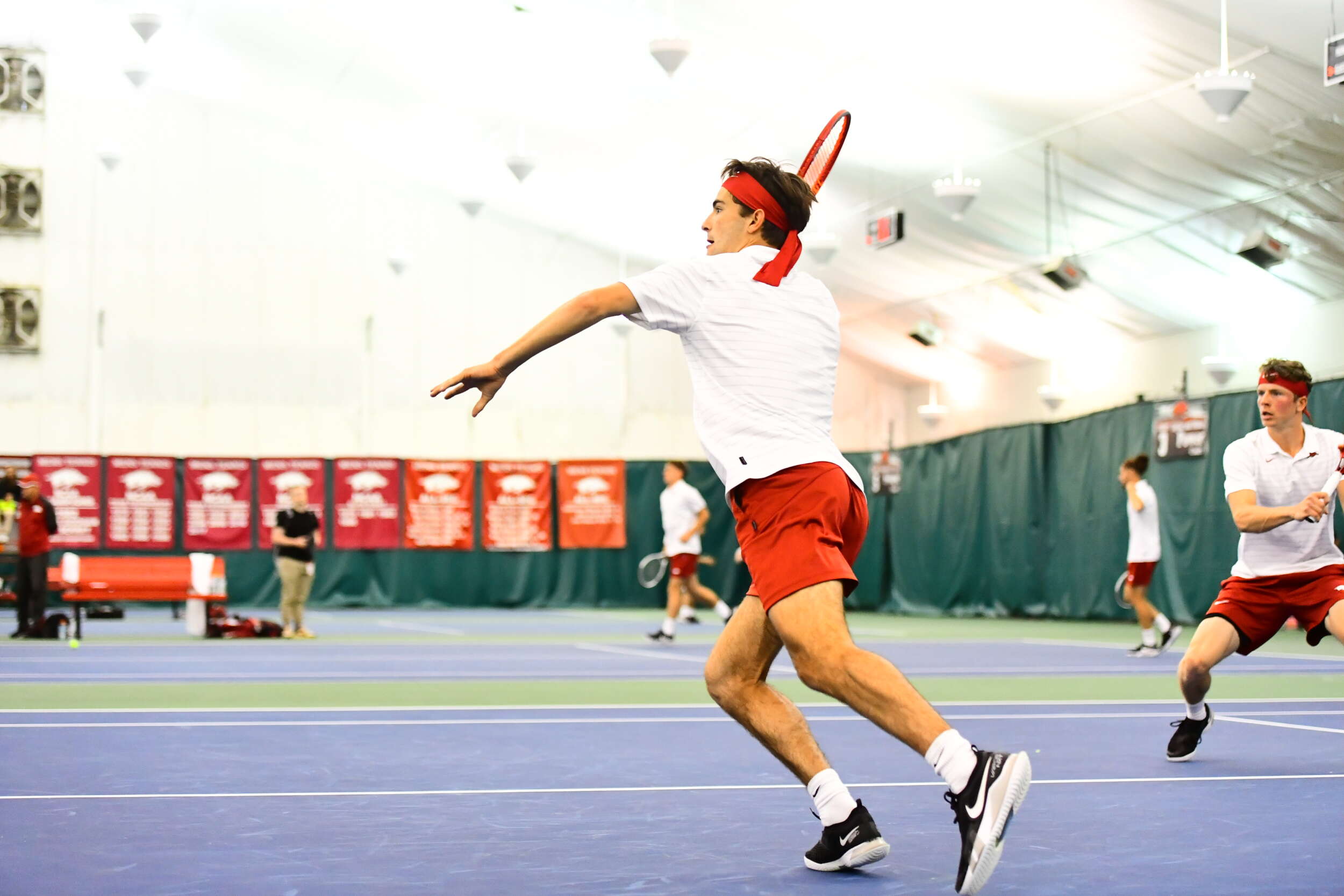 Manuel Clutch Down the Stretch, Hogs Prevail over Mississippi St.

FAYETTEVILLE, Ark. – Razorback Men’s Tennis (12-11, 3-7) earned a crucial conference win on Friday as the Hogs defeated the Mississippi State Bulldogs (13-10, 3-7), 4-3, in the teams’ second meeting of the season. That is back-to-back SEC wins for Arkansas after defeating Alabama on the road last Sunday, 5-2.

“Good win against No. 30 Mississippi State,” Arkansas Head Coach Andy Jackson said. “It gives us a chance to be in the NCAA Tournament, and one more win in the SEC would push us in the Tournament with high confidence. It’ll be hard at Ole Miss and at LSU next weekend, but it is always hard in the SEC. I’m proud of the team for the character and fight they’ve shown through a lot of down moments this year. We have a good team and are getting closer to getting it going.”

It was apparent from the start that Friday was going to be a battle, starting with doubles. Each of the three matches went down to the wire, with Melvin Manuel and Adrien Burdet letting a 4-2 lead elude their grasp, falling 6-4 on court two, and Reco and Rousset forcing a tiebreaker at 6-6 on court one, narrowly losing in the breaker, 7-4. Hunter Harrison and Jake Sweeney were up 40-15 at 5-5 on court three when the point was clinched.

The Hogs were quick to bounce back, starting the singles matches red hot. Five of the six first sets went the Hogs’ way.

Arkansas’ Alex Reco, ranked No. 107 in the country, handled No. 31 Florian Broska in just over an hour, 6-2, 6-2, to get the Razorbacks on the board. Shortly after, Arkansas sophomore Aleksa Bucan sealed his match on court six, 6-4, 6-3, to put the Hogs in front.

Burdet followed Reco and Bucan with a straight sets victory over Alberto Colas. After winning the first set, 6-1, Burdet came back from down 2-4 in the second set to force a tiebreaker, which he would go on to win, 7-4.

The Bulldogs would not go down easy in a 3-1 hole, making a push by winning on courts two and three in third sets to pull even. But Manuel played the hero on Friday, dominating his third set with Davide Tortora, 6-1, to claim the victory for the Razorbacks.

“The team showed a lot of toughness today,” Manuel said. “I am very happy for our seniors Alex, Nico and JJ. This win is for them.”

Arkansas is back in action tomorrow for its final home match of the season. The Razorbacks will welcome the Saint Louis Billikens for a doubleheader at the Billingsley Tennis Center, with the first match starting at 4:30 and the second match to follow.

“We are looking forward to getting to play Saint Louis twice tomorrow,” Jackson said. “We really need the matches, and hopefully we can have success.”