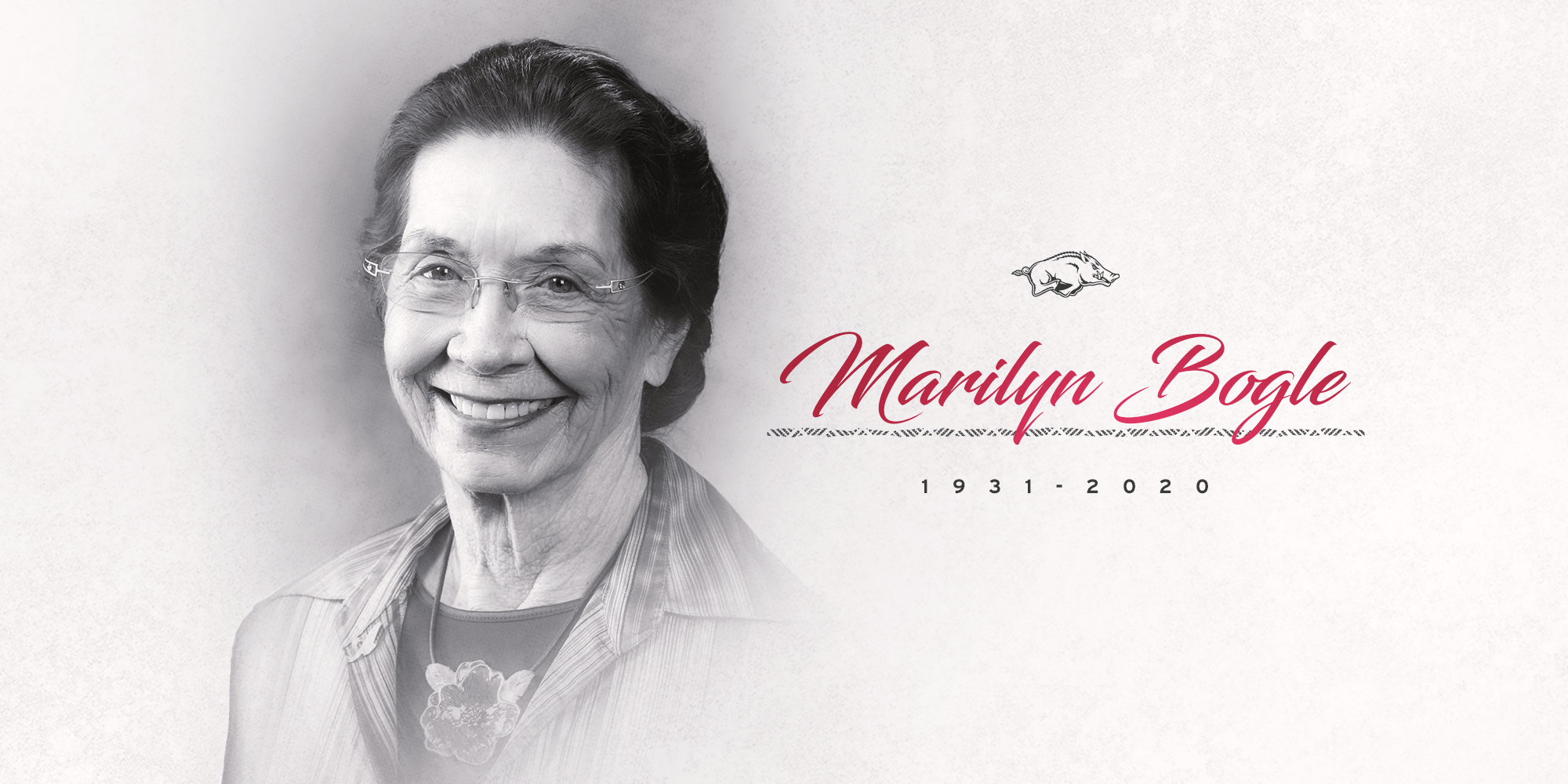 The Bogles’ generosity helped foster the success of millions of Arkansans, including thousands of Razorback student-athletes.  Among her many impactful contributions to the enrichment of others, Marilyn played a pivotal role in the expansion and growth of women’s sports at the University of Arkansas.

“The Razorback Family has lost one of its most gracious and passionate members,” Vice Chancellor and Director of Athletics Hunter Yurachek. “Through her words and generous actions, Marilyn positively impacted the lives of millions of Arkansans and made our university and state a much better place. Her longtime dedication to the continued growth of student-athletes, both academically and athletically, made a difference in the lives of the young men and women who competed as Razorbacks. Marilyn’s commitment to expanding intercollegiate athletics opportunities for women was truly transformational. We have lost a dear friend, but the lasting legacy of Marilyn Bogle will continue to shape our program for generations to come.”

Through the years the Bogles’ generous support resulted in numerous enhancements and projects benefitting the Razorback program, including the establishment of the Bob and Marilyn Bogle Academic Center, an endowed gymnastics scholarship, the construction of the Bev Lewis Center and George Billingsley Tennis Center as well as the renovation and expansion of Donald W. Reynolds Razorback Stadium and Baum-Walker Stadium. In May 2008, Bogle Park, the nation’s top new softball facility, was officially dedicated on the University of Arkansas campus thanks to the Bogles’ support of the Razorback softball program.

Bob and his wife Marilyn were married for 69 years. They met at the Woodruff County Health Department in Augusta, Ark., where Marilyn’s mother worked as a secretary. After her mother wouldn’t come right out and introduce them, Marilyn made it a point to stop by one day to meet the new young man working in the office. Not long after, the two went on a date and attended a Razorback football game in the recently completed War Memorial Stadium in Little Rock. In 1950, Bob and Marilyn were married and moved to Augusta for three months before moving to Bentonville in the fall of 1951.

Bogle was the first manager of the Walton’s Five and Dime located on the Bentonville square. He later worked with the budding retail giant Walmart for 28 years before retiring in 1982. He also served his country as a colonel in the National Guard from 1953-82.

Although given countless opportunities to leave Northwest Arkansas for other professional opportunities within Walmart, the Bogles decided to establish roots in Bentonville to build their life and raise a family. Marilyn is survived by her husband Bob, daughters Becky Alexander and Ann McKenzie who still live in Northwest Arkansas with their husbands Bob and Jim, respectively. Son David Bogle and his wife Tina are in the area as well. The Bogles’ grandchildren include grandsons Ben Bogle and his wife Sara, Marshall and Sam McKenzie, granddaughter Erin Easley and her husband Jason, three great-grandchildren and numerous nieces and nephews.

Some of the most memorable Bogle family moments have centered around various Razorback athletic events. Trips to the 1990 and 1994 NCAA Final Four rank among the favorites that come to mind. A long-time friendship between Marilyn and former women’s athletic director Bev Lewis has helped cultivate the Bogles’ support for many of the Razorbacks women’s sport programs. For many years, Marilyn remained an active participant on the committee that helps plan the athletic department’s Red Tie Dinner as well as serving on the University of Arkansas’ Board of Advisors.

“My favorite thing about following the Razorbacks is supporting the women’s teams,” Marilyn said in an interview in 2011. “We go to Hot Springs each year to watch a women’s basketball game. You get to see the same people every year, some of them who can’t come up to Fayetteville. The following is smaller, so you get an opportunity to know the young ladies who are competing. I always enjoy going to the socials with the coaches and student-athletes. I love being involved and getting to know them.”

The Bogles’ impact on Razorback student-athletes extends far beyond just cheering them on from the stands. As long-time members of the Razorback Foundation, the Bogles provided extensive financial support for numerous academic and athletic programs enriching the collegiate experience for more than 460 student-athletes annually. The Bogles were also recipients of the University of Arkansas Sports Hall of Honor Distinguished Service Award.

Throughout the state of Arkansas, it is the Bogle family name which has become synonymous with generosity and providing opportunities to many across the region. The Bogles’ benevolence extends well beyond the University of Arkansas and the Razorback program. Their support of their community and their love for the outdoors has resulted in several new parks and gardens in Bentonville. Marilyn was a member of the Bentonville Garden Club since 1986. Multiple outdoor parks have been created in the area, including the original “Bogle Park” located across from Bob and Marilyn’s home in Bentonville.

At the very heart of the family’s philanthropy was a commitment to enhancing the lives of those in their community and at the University of Arkansas. Thanks to the Bogles’ generosity and support, countless others now have a chance to make a difference.