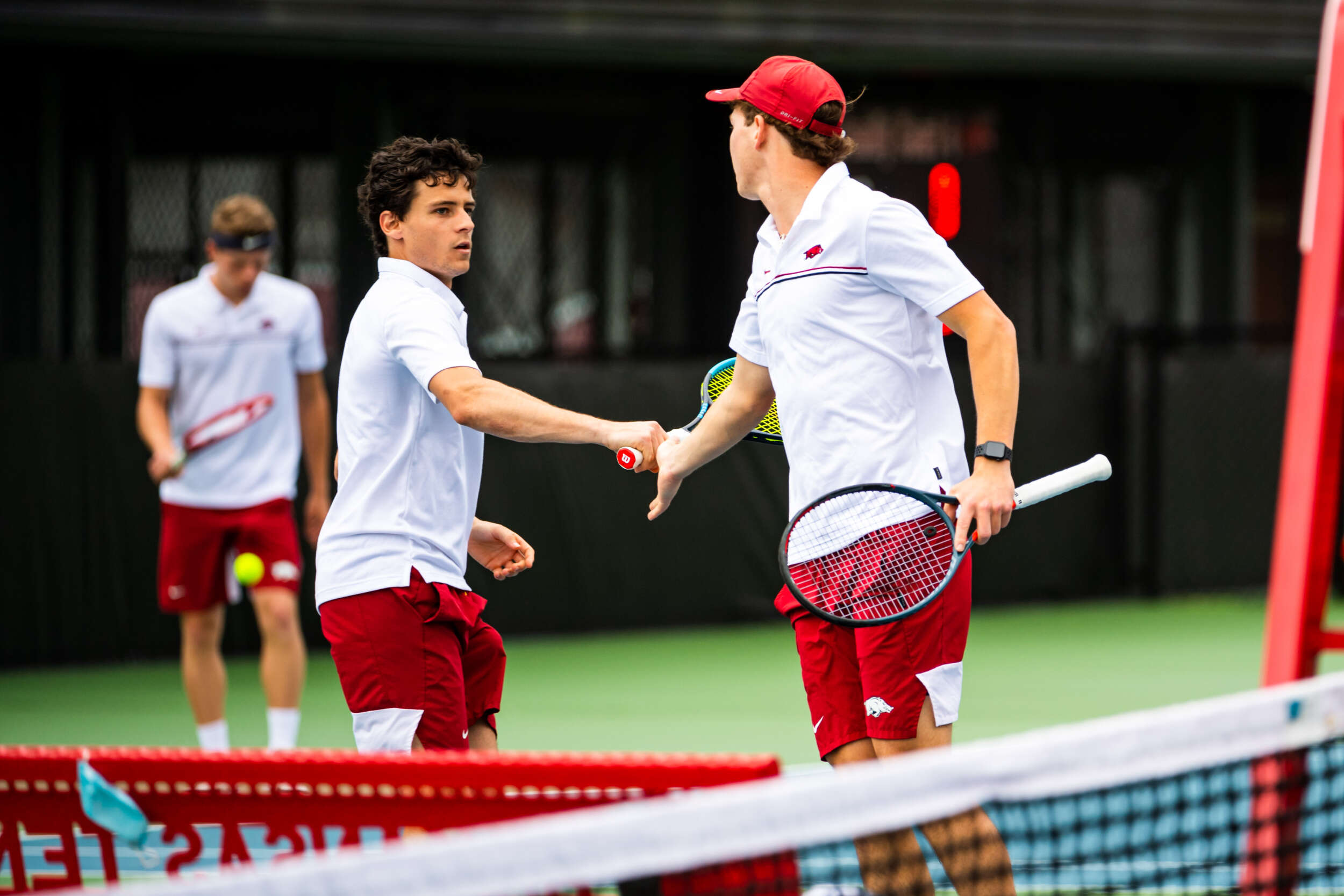 Men's Tennis travels to Orlando for a matchup with No. 21 UCF

The Hogs upset No. 12 Texas A&M at home for their first win over the Aggies since 2016. Arkansas clinched the doubles point and followed with three singles wins for the 4-3 win on Sunday, March 14.

Nico Rousset and Alex Reco picked up the first doubles win for the Hogs at the No. 3 position and are currently on a five-match winning streak as a duo. Melvin Manuel and Adrien Burdet clinched the doubles point for the Hogs with a win on court two, moving to 3-0 as a pair. Both doubles courts won by a score of 6-4.

In singles, Aleksa Bucan was first off the courts with a straight sets 6-3, 6-1 win over No. 116 Noah Schachter on court three. Burdet followed with a 6-4, 6-4 victory on court five for his ninth win in his rookie season, tying for the team lead this dual season. Rousset clinched the upset for the Hogs at the No. 2 position (7-5, 6-3) over No. 33 Carlos Aguilar for his second win over a nationally ranked opponent this spring.

The Knights had their six-match winning streak come to an end on Sunday, March 21 in a loss to No. 17 Georgia, 4-2.

No. 16 Gabriel DeCamps is on an eight-match winning streak at the No. 1 position and is 4-1 against nationally ranked opponents. Kento Yamada is 8-0 overall and 6-0 in the No. 5 position.

In doubles, the Knights have solid duos in Decamps and Trey Hilderbrand at the No. 1 position and Juan Pablo Mazzuchi and Bogdan Pavel at the No. 2 position, both pairs with seven wins on the season.

>> This is the third matchup between the Knights and Razorbacks. After UCF won the series opener in 2018, Arkansas evened the series the next year with a 4-3 victory in Fayetteville.

>> The doubles duo of Rousset and Reco have won five straight and are 8-1 in the No. 3 spot.

>> Rousset and freshman Adrien Burdet lead the Hogs with nine singles wins each.

>> Rousset has won his last three matches, notched two wins over nationally ranked opponents, and is 6-3 in the No. 3 spot.