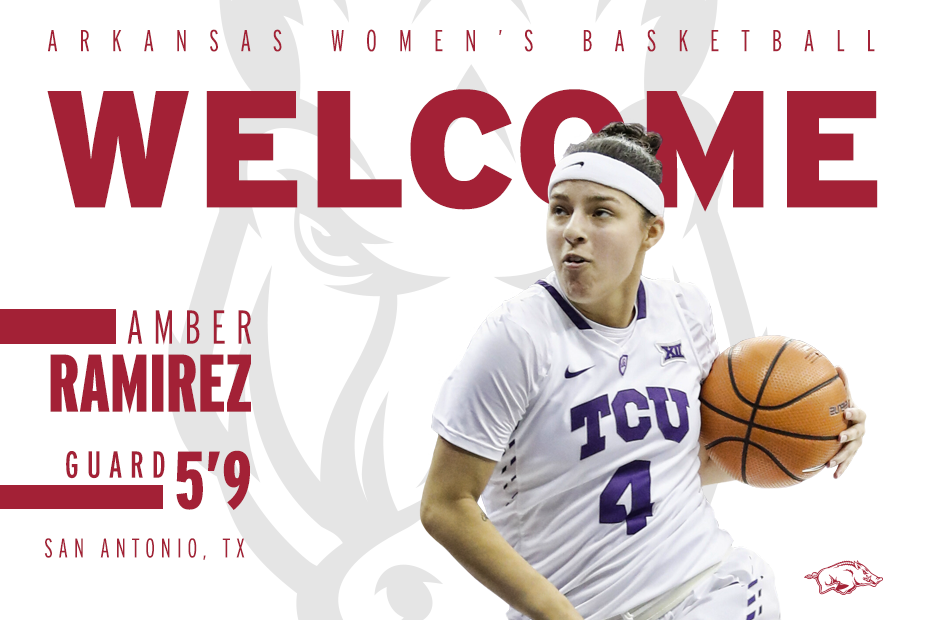 Ramirez is a former five-star recruit out of high school and is transferring to Arkansas after two seasons at TCU. She will redshirt the 2018-19 season due to NCAA transfer rules. The 5-9 guard kept her announcement simple, saying “New beginnings, Wooo Pig Sooie” on her Twitter feed.

Ramirez played in the McDonald’s All-American Game and the Jordan Brand Classic game following her senior season at Wagner High School in San Antonio, Texas. She won the 3-Point Shootout and was part of the winning team at the Legends and Stars shootout, hitting a half-court shot to clinch the victory.

Her TCU career spanned two seasons where she played in 59 games and averaged 9.6 points per game, including 10.4 ppg in 2017-18, helping the Horned Frogs reach the semifinals of the WNIT. Ramirez’s offense was balanced as she shot 39.1% overall and 38.2% from beyond the arc. She increased her assist production from 32 as a freshman to 103 as a sophomore.

Career Highlights
• USA Basketball
o Two gold medals at the 2016 FIBA Americas U18 Championship in Chile
o Averaged 10.8 ppg in five games with USA Basketball
o Silver medal at 2016 FIBA 3×3 U18 World Championships in Kazakhstan and was the team captain
• Top-10 Consensus recruit
o Five-star recruit by ESPN and Prospect Nation
o Ranked No. 2 in the nation at her position as a senior
• McDonalds’ All-American
• Jordan Brand All-American

From Coach Neighbors
When a player with the national reputation of Amber Ramirez chooses your University and your locker room to continue her education and basketball career, it’s evidence you’re making great strides to compete in the SEC. She brings international experience with USA Basketball, and has two years of playing in the BIG XII under her belt. Her pre-college career includes four years at Wagner High School with coach Tina Camacho and with the San Antonio Finest working with coach Ray Caldwell where she competed against elite competition.

Anyone who has seen her compete and us play, can immediately see how her game is a perfect fit. She plays functionally fast, makes her teammates better, and is positionless. But it’s what she does in practice and when no one is watching that created her separation from good to great. Her day-to-day focus on skill development and personal growth fits our culture knowing that no matter how good we are today, it’s not good enough tomorrow.