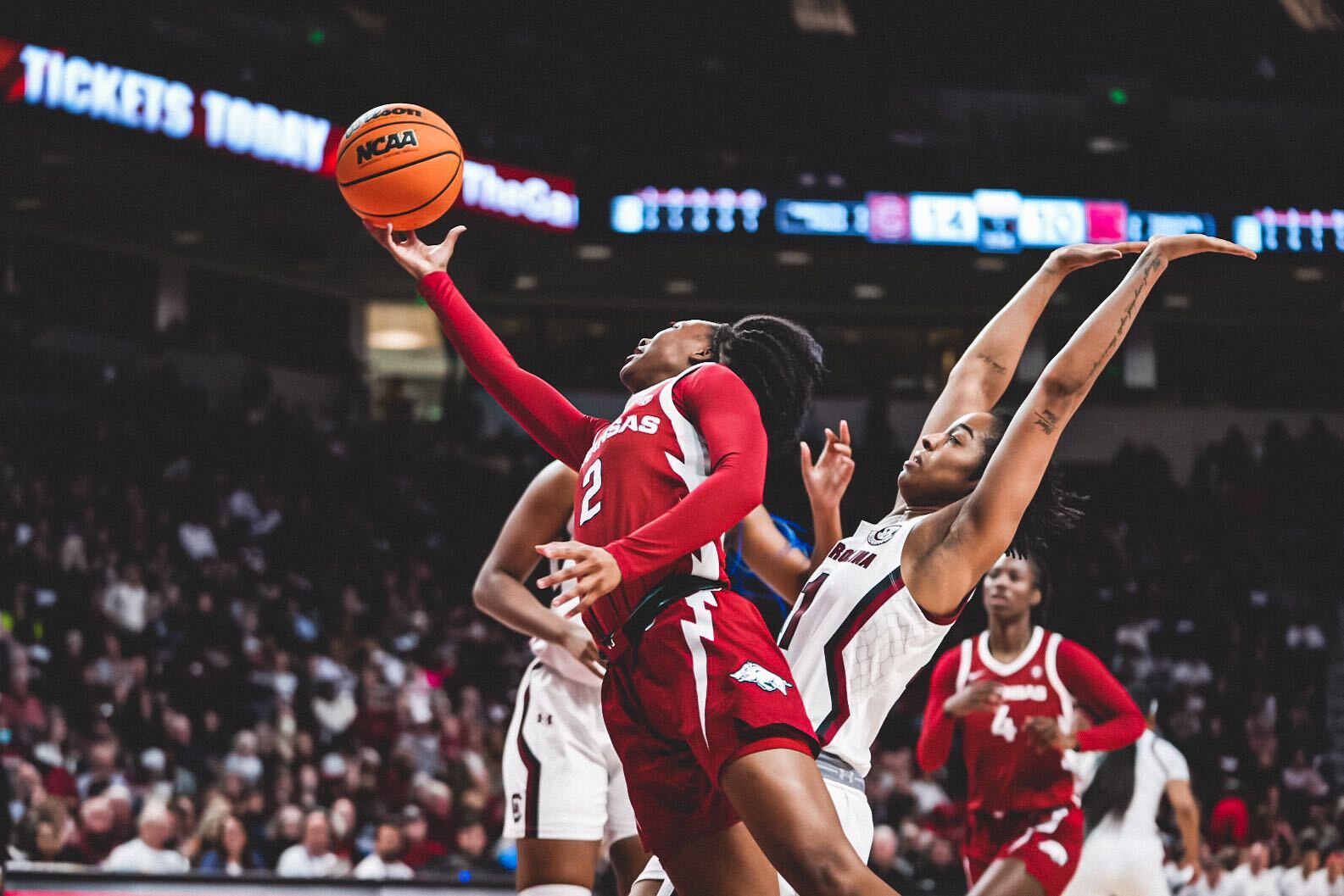 COLUMBIA, S.C. –  The Arkansas women’s basketball team (17-5, 4-3 SEC) hung tough with South Carolina (20-0, 8-0 SEC) hung tough in the first quarter with the Gamecocks, but after being outscored 67-29 in the last three quarters, Arkansas was downed 92-46. The Gamecocks showed why the team is No. 1/1 in the country, outrebounding the Razorbacks 74-17, while delivering 37 points off second-chance opportunities versus Arkansas’ zero. Arkansas’ 17 rebounds is the least pulled down by the Razorbacks in SEC play in program history. The least coming into today’s game was 19 at Florida in 1998.

South Carolina made its first two field goal attempts of the game, while Chrissy Carr drained a 3-pointer on the Razorbacks’ first possession. A Barnum and-1 made it a 7-6 game in favor of the Gamecocks just two minutes into the contest. The Razorbacks kept matching what the Gamecocks were giving them offensively, but after a Gamecock triple, Arkansas trailed 17-12 at the media timeout with 4:54 left in the first quarter. Out of the break, Makayla Daniels logged a triple to inch the Razorbacks within three, but the Gamecocks responded by attacking the glass to get a third-chance jumper. Arkansas was held in a scoring drought for two and half minutes until Barnum knocked down two freebies. The Razorbacks struggled from the field for some time, going through a stretch of making just one of 11 field goal attempts to close out the quarter and trail 25-17.

The Gamecocks opened the second quarter on a 6-0 run, as Arkansas’ struggles from the field continued. Barnum helped the Razorbacks get out of a big hole with a layup, Arkansas’ first field goal of the quarter. South Carolina went on an 15-0 run, and all the sudden, Arkansas was down by 27 points. Samara Spencer pushed the Razorbacks out of another deep field goal drought with a layup. The Razorbacks had a tough quarter, being outscored 28-7 in the frame to trail 53-24 at the half.

The Gamecocks didn’t put their foot off the gas coming out of the halftime break, as South Carolina continued to attack the glass for second-chance opportunities, getting 37 of their 92 points off second opportunities. South Carolina outscored Arkansas 13-5 in the first five minutes of the third quarter, and Arkansas trailed 66-29 with 4:41 left in the third quarter. Spencer nailed a 3-pointer, but the Gamecocks still outscored the Razorbacks 24-10 in the third. Arkansas was outscored 15-12 in the fourth quarter to drop the game, 92-46.

Arkansas returns home for two straight games in Bud Walton Arena, starting with a matchup against Alabama on Thursday, Jan. 26 at 6 p.m. The game will be broadcast on SEC Network.