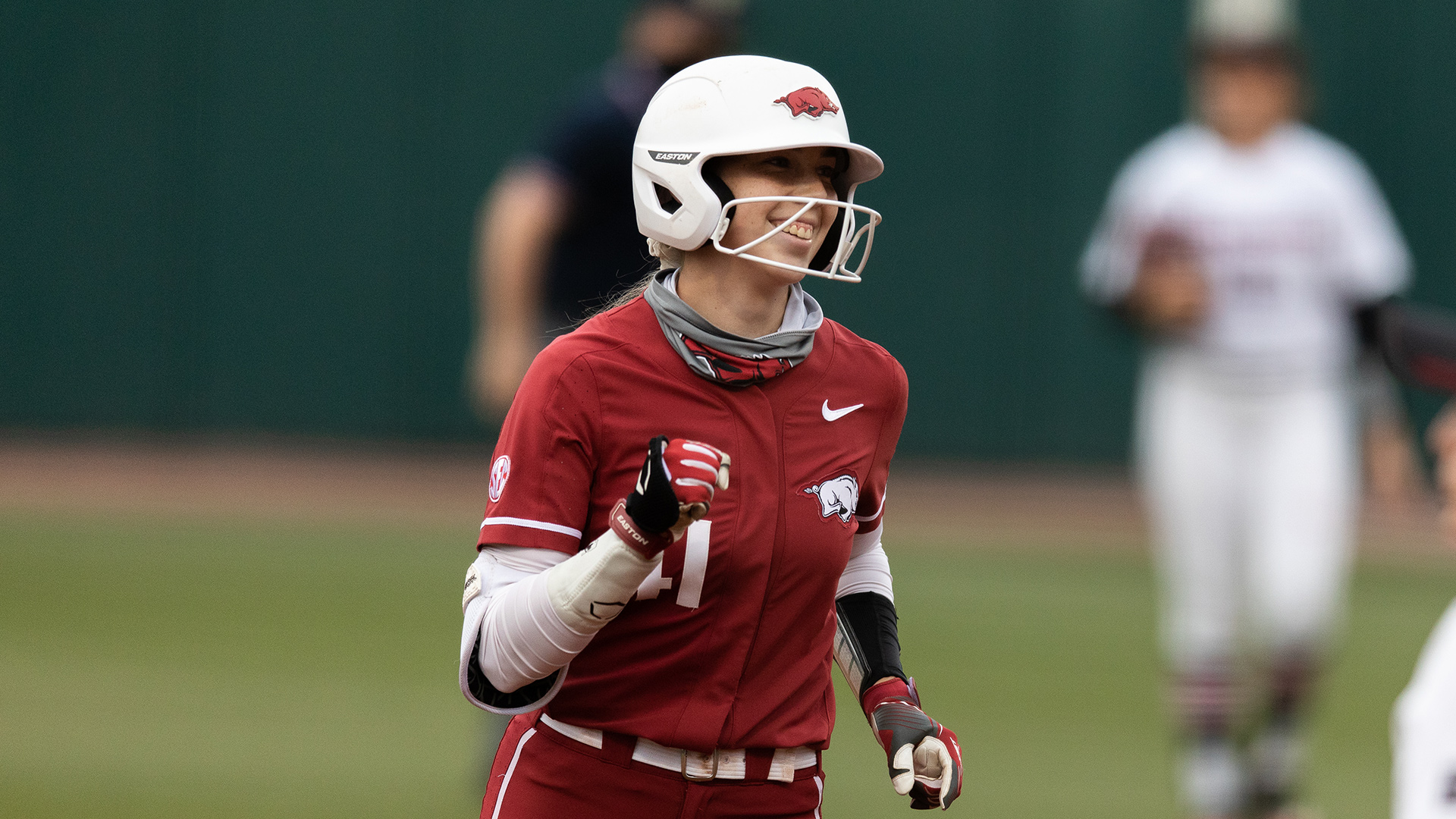 No. 10 Arkansas Hits Three Homers in Victory Over No. 20 Georgia

ATHENS, Ga. – The No. 10 Arkansas softball team exploded for eight runs over the game’s final three innings to win the first game of a three-game set against No. 20 Georgia, 10-3, at Jack Turner Stadium on Friday evening. Infielder Danielle Gibson led the way at the plate and hit one of the Razorbacks’ (34-5, 14-2 SEC) three home runs, and along with a double, tied her season-high with five RBI.

­­­With one out in the third frame, infielder Hannah Gammill launched her seventh home run of the season to the trees in right center, putting the Hogs in front, 1-0. Catcher Kayla Green’s one out blast to left in the top of the fourth doubled Arkansas’ lead to 2-0. The redshirt junior homered for the ninth time this year and the fifth time in her last 14 at-bats.

Arkansas pitcher Autumn Storms was perfect the first time through the order, retiring all nine batters she faced, but Georgia’s (27-9, 6-7 SEC) offense came alive to tie the game, 2-2, in the fourth. After two singles put runners on first and second to start the inning, Lacey Fincher hit a double that took a big carom off the top of the left field wall, scoring both runners. A groundout and a swiftly turned 6-4-3 double play ended the side.

Gammill led off the fifth drawing a walk, and infielder Braxton Burnside delivered by sneaking a double down the third baseline, putting Arkansas back in front, 3-2. The Razorbacks increased their lead to 5-2 on Gibson’s 12th shot of the year, a two-run home run to right field.

After loading the bases to start the sixth, Arkansas went right back to work as outfielder Hannah McEwen walked, and Gibson cleared the bases shooting a double to center, ballooning the advantage to 9-2.

Gammill plated another run in the top of the seventh on a groundout, and the Bulldogs hit a solo home run in the bottom half of the inning.

Storms (7-1) picked up the win throwing 4.0 innings and allowing two runs on three hits and two walks with a strikeout. Mary Haff (4) notched her team-high fourth save of the season, tossing 3.0 frames and allowing one run on four hits with five strikeouts. Mary Wilson Avant (14-5) went 6.0 innings for Georgia, allowing nine runs (seven earned) on seven hits and five walks.

The Hogs banged out a season-high 10 runs in a game during conference play and tied the program’s mark for most runs scored against the Bulldogs (April 2, 2010). Arkansas’ 75 home runs this year ranks second nationally and hit three or more taters in a game for the 10th time this year. The Razorbacks outhit Georgia, 8-7.