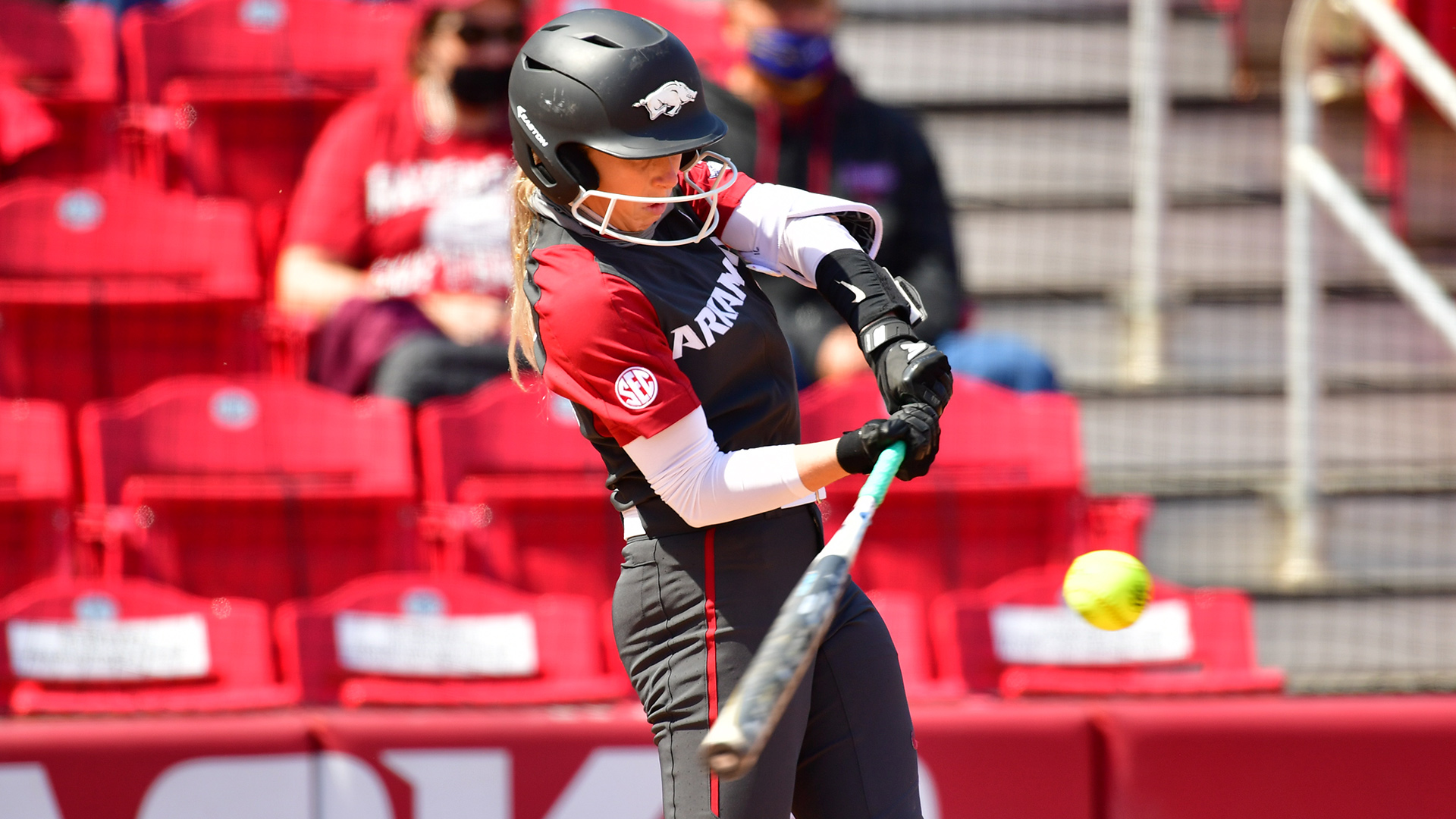 No. 17 Arkansas Sweeps Series in Walk-Off Fashion Over Ole Miss

FAYETTEVILLE, Ark. – For the second game in a row, the No. 17 Arkansas softball team hit a walk-off home run in extra innings to defeat Ole Miss on Sunday afternoon at Bogle Park. Infielder Keely Huffine blasted her fifth homer of the season to left in the bottom of the eighth inning, securing a 3-2 victory and first place in the SEC standings. The Razorbacks (3-2) improved to 6-0 in conference play for the first time in program history.

Ole Miss (18-10, 3-3 SEC) scored a single tally early in the first inning on a sacrifice fly to left and added another solo run in the fourth on a single to grab a 2-0 lead.

Much like yesterday’s 3-2 walk-off extra inning win against the Rebels, Arkansas scored all three of its runs in the final three innings. With one out in the sixth, infielder Danielle Gibson singled and catcher Kayla Green doubled, putting runners on second and third. Designated player Linnie Malkin struck out on a wild pitch, which allowed Gibson to dart home and cut the lead in half. Cally Kildow ran for Green at third, and outfielder Aly Manzo laid down a perfectly placed suicide squeeze to tie the game, 2-2.

The following inning, Ole Miss hit a double to centerfield that barely stayed in the yard, which bounced off the top of the wall, but reliever Autumn Storms stranded her at second. Huffine then came through, hitting the game-winning jack in the eighth inning.

Starter Jenna Bloom pitched tremendously in the no decision effort. After surrendering an early run, she found her rhythm and went 6.2 innings allowing five hits and two runs with a season-best nine strikeouts. Bloom fanned five in a row during the second and third frames and later retired nine in a row over the fifth through the seventh innings. Storms (3-0) pitched for the second straight day and earned the win in relief, hurling 1.1 scoreless innings. Anna Borgen (6-2) tossed 6.2 innings allowing eight hits and three earned runs with a walk and three strikeouts for the Rebels.

Arkansas outhit Ole Miss, 9-6, and neither team committed an error. Gibson hit her SEC-leading 13th double of the season in the first inning and finished the game 2-for-3 with a walk. Green, Huffine and outfielder Sam Torres each recorded two hits. The Razorbacks have won the last six games against the Rebels in Fayetteville.

Arkansas steps out of conference play for a pair of road midweek games next week. The Razorbacks play at 4 p.m. on Tuesday, March 23 at Kansas City and 5 p.m. on Wednesday, March 24 at Kansas.