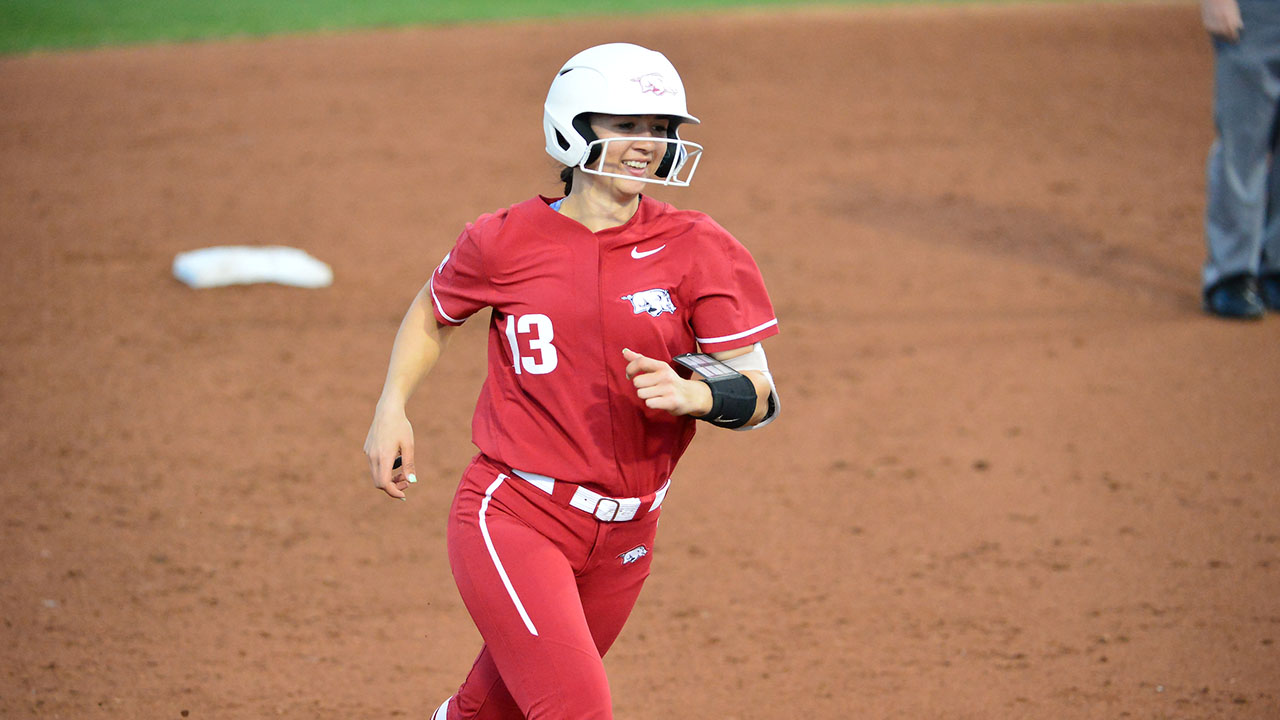 No. 20 Arkansas Walks Off Twice in Doubleheader Sweep over Kansas

FAYETTEVILLE, Ark. – Heroics were aplenty for the No. 20 Arkansas softball team as it won both games of a doubleheader against Kansas (13-13) in walk-off fashion. The Razorbacks (19-6) pieced together a three run seventh inning rally to win game one, 3-2. One swing of the bat was all Arkansas needed to claim the nightcap, and in a scoreless game with one out in the bottom of the seventh, junior Kayla Green belted a solo homer to left for the 1-0 triumph.

Trailing 2-0 and down to its final three outs, Green ignited the rally in the top of the seventh inning with a single to center. Senior Sydney Parr beat out an infield single to short and both runners moved into scoring position on an errant throw by the Kansas shortstop. Junior Linnie Malkin drew a free pass to load the bases. With one out, sophomore Audrie LaValley was called upon to pinch hit in a pressure situation and delivered the game tying knock. She found grass in shallow right to plate Parr and redshirt freshman pinch runner Larissa Cesena, who narrowly beat the tag of the KU catcher.

The Jayhawks elected to intentionally walk junior Hannah McEwen to load the bases and induced a fly out for the second out. Senior Ryan Jackson won a classic hitter versus pitcher duel, and on the 17th pitch of the at bat was hit on the leg to push across the winning run.

Senior pitcher Autumn Storms (11-3) avoided the big inning to collect her league-leading 11th win of the season. She had the groundball pitch working all evening and rolled over 14 Jayhawk groundouts compared to four flyouts. The righthander allowed eight hits, three walks and struck out three.

The Jayhawks outhit Arkansas, 8-5, and two long balls accounted for all of their run production. Kansas hit a solo shot in the fourth and attempted to protect its lead with a solo jack in the top of the seventh.

Hailey Reed (4-5) threw 136 pitches for Kansas over 6.2 innings in the losing effort. She struck out seven, walked three and hit three batters. All five of the Hogs hits were singles.

Arkansas was in position to win the game in the seventh inning due to freshman Jenna Bloom’s (4-2) sensational outing inside the circle. The Huntington Beach, Calif. product fanned a career-best 10 Jayhawks and earned the first complete game shutout of her career. In stark contrast to Storms’ start earlier in the day, Bloom used the flyball to her advantage and recorded 10 flyouts to only one groundout. The rookie allowed only four singles and walked two.

Mills (3-3) struck out four and did not surrender a free baserunner in the tough luck loss.

The Hogs swept the twinbill over their Big 12 Conference foes, meeting in Fayetteville for the first time since 2006.