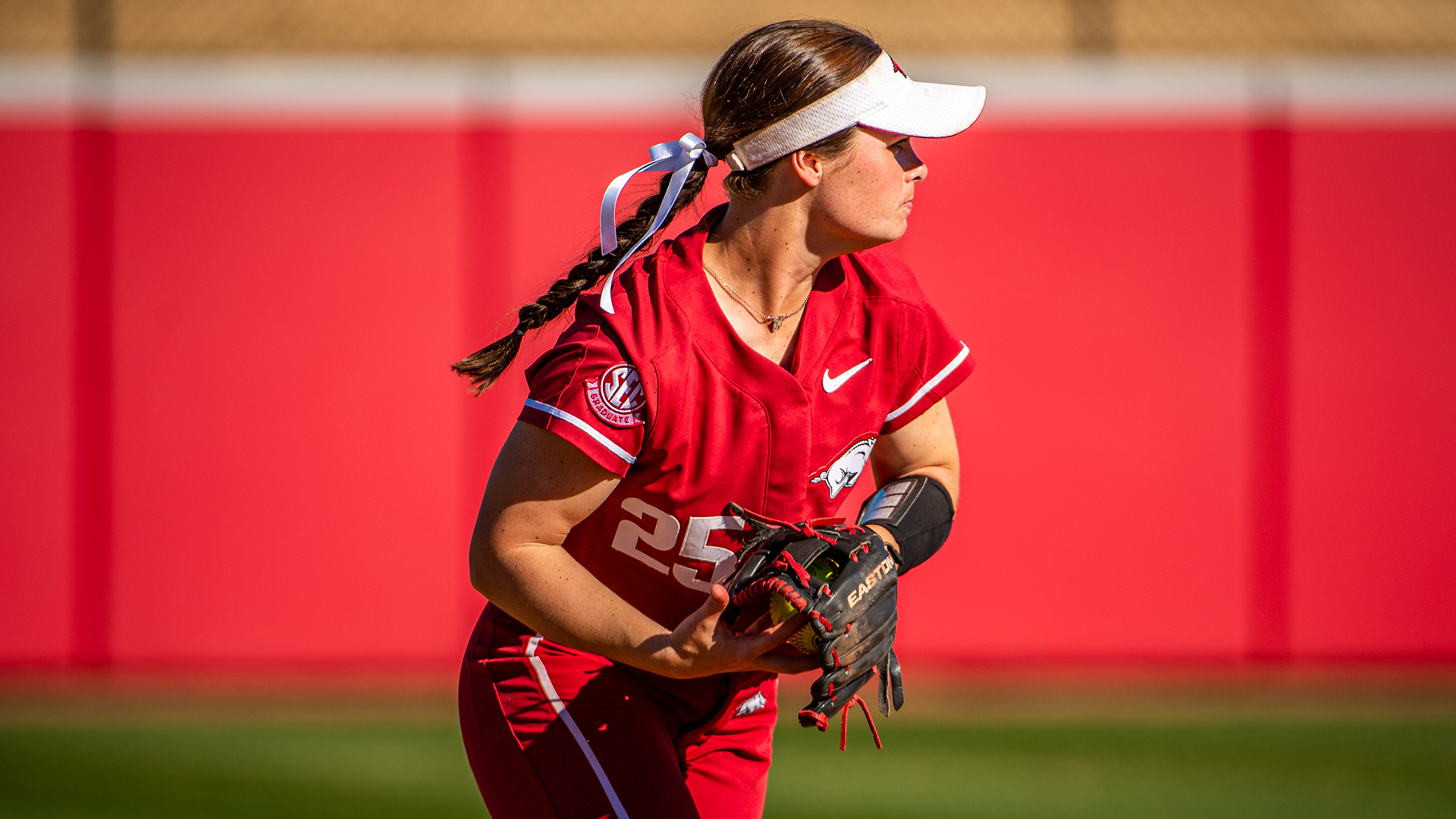 MONROE, La. – No. 21 Arkansas rallied back from a seven-run deficit in the fourth inning to reclaim the lead in the top of the seventh, but could not hold on, falling to No. 10 Oklahoma State, 12-11, in the season opener at the Best on the Bayou Classic on Thursday evening. Redshirt senior Braxton Burnside powered the offense with her third career two-homer game, collecting four RBI.

Burnside blasted the season’s first hit over the center field fence, and redshirt sophomore Audrie LaValley drew a bases loaded walk, giving the Razorbacks (0-1) a 2-0 edge after the first frame. The Cowgirls’ (1-0) answered right back, scoring four runs in the top of the second with the help of two errors. Redshirt junior Danielle Gibson smacked the first of her two doubles on the day to right in the second, plating redshirt junior Hannah McEwen to make the score, 4-3. Oklahoma State scored six runs over the third and fourth innings on two 2-run homers and a 2-run base knock to grab a 10-3 lead.

The Hogs scratched out a single tally in the fifth as redshirt sophomore Valerie Ventura sliced an infield single to third, plating LaValley. In the bottom of the sixth inning, Arkansas’ offense exploded for seven runs and grabbed an 11-10 lead. After Gibson’s second double, a redshirt senior Ryan Jackson hit by pitch and a redshirt junior Linnie Malkin walk, LaValley once again plated a run drawing a bases loaded walk to open the frame’s scoring. In a pinch hit assignment, redshirt sophomore Sam Torres poked a ball through Oklahoma State’s first baseman, plating two more runs. Ventura followed reaching on a fielder’s choice which pulled the Hogs within two, 11-9. McEwen walked in front of Burnside setting up her second homer of the day, a towering three-run blast over the left field wall, giving Arkansas an 11-10 edge.

OSU responded the next half inning, tying the game with a double before taking a 12-11 lead on a sacrifice fly that followed a passed ball.

Redshirt junior Mary Haff (0-1) earned the start, throwing the first two innings before coming back in for the seventh. She surrendered four runs with only one earned and struck out five. Freshman Lauren Howell made her collegiate debut throwing 2.2 frames and retired six hitters in a row during the fifth and sixth innings. Oklahoma State utilized three pitchers, with redshirt sophomore Kelly Maxwell (1-0) picking up the win throwing the last 1.1 innings. Arkansas chased starting pitcher Carrie Eberle, the 2019 ACC Pitcher of the Year at Virginia Tech, after four innings grinding out five hits and five walks.

Gibson finished the day 3-for-5 with an RBI and Jackson was 1-for-2 with two hit by pitches and two runs scored. LaValley was 0-for-1 with three walks, a hit by pitch, two RBI and a run scored. Malkin was 0-for-2, but drew a career-high four walks.

Arkansas plays two games at the Best on the Bayou Classic, Friday, Feb. 12, taking on Lipscomb at 11 a.m. and Jacksonville State at 1:15 p.m.