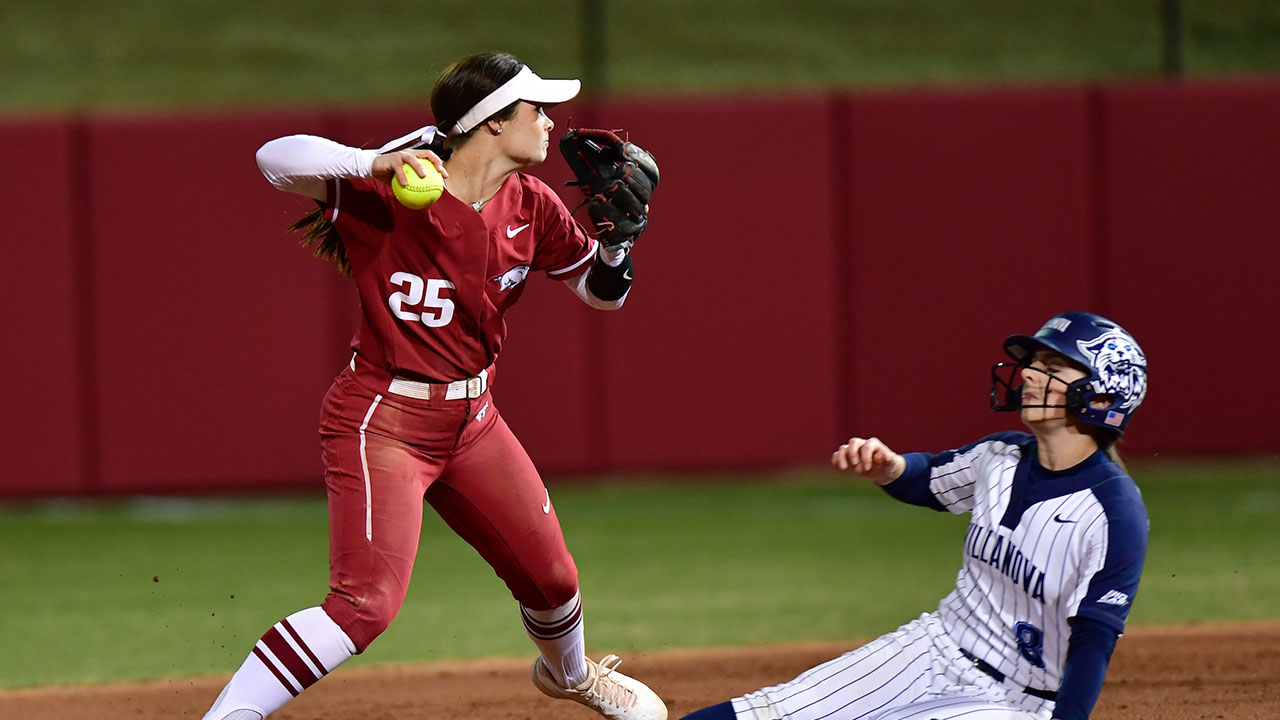 FAYETTEVILLE, Ark. – The No. 22 University of Arkansas softball team (15-4) earned a split during day three of the Wooo Pig Classic hosted at Bogle Park. The Razorbacks played an exciting pitcher’s duel against No. 9 Florida State (10-6) but fell 2-1 to the Seminoles. The Razorbacks came back in the second game to defeat Villanova (10-9) 12-4 in five innings.

1,997 fans entered through the Bogle Park turnstiles to see the Razorbacks and Seminoles, which is the eighth-best mark for a single game in program history.

Florida State utilized a leadoff walk in the second inning to score a single tally. The FSU runner took second on a groundout and then was doubled home with two outs.

The Seminoles took advantage of a leadoff error in the top of the sixth inning to score an important insurance run. Another double plated a run as three of FSU’s five total hits went for extra bases.

Junior Braxton Burnside and senior Ryan Jackson both singled to begin the sixth. Burnside registered the only Razorback run of the game on a wild pitch which sent her to third and then an overthrow by the catcher scored the run.

In the seventh inning senior Keely Huffine singled to try and spark a rally but was left on base to end the game.

Senior pitcher Autumn Storms (8-2) went the distance and only allowed one earned run. She struck out six, walked three and allowed five hits. FSU’s Caitlyn Arnold (3-2) pitched for five innings and did not allow an earned run with one walk and seven strikeouts. Kathryn Sandercock (1) earned her first save of the season by throwing the last two innings and only allowing two hits.

Sophomore catcher Taylor Greene came in as a defensive replacement early in the game and recorded a base hit in the fourth, her first of the season. Arkansas outhit FSU, 6-5, but had only one extra base hit.

The Wildcats scored first with a two run homer in the top of the first inning, but the Razorbacks sliced the deficit in half in the bottom of the frame to make the score, 2-1. Junior Danielle Gibson lifted a deep sacrifice fly to left which plated junior Hannah McEwen.

Burnside followed up in the bottom of the second and tattooed a towering two run homer to claim a 3-2 Razorback lead.

The offense kept attacking and scored two more in the third. Redshirt freshman Valerie Ventura skied a double to right field which scored the first run and Arkansas capitalized on an error to score a second tally.

Villanova clubbed another two run homer in the fourth inning to make it a 5-4 ballgame. Arkansas plated three in the bottom of the stanza on a Gibson double, Malkin single and Huffine double as both teams scored back-and-forth to make it an 8-4 lead.

Arkansas scored four more in the bottom of the fifth inning and run-rule victory as Huffine’s RBI single to center closed the game.

Freshman Jenna Bloom (3-1) was the winning pitcher out of the bullpen. She went four innings and allowed two earned runs on two hits. She also struck out three.

Arkansas closes out its 12-game homestand tomorrow, March 1, with a 12:15 p.m. first pitch against Kent State.