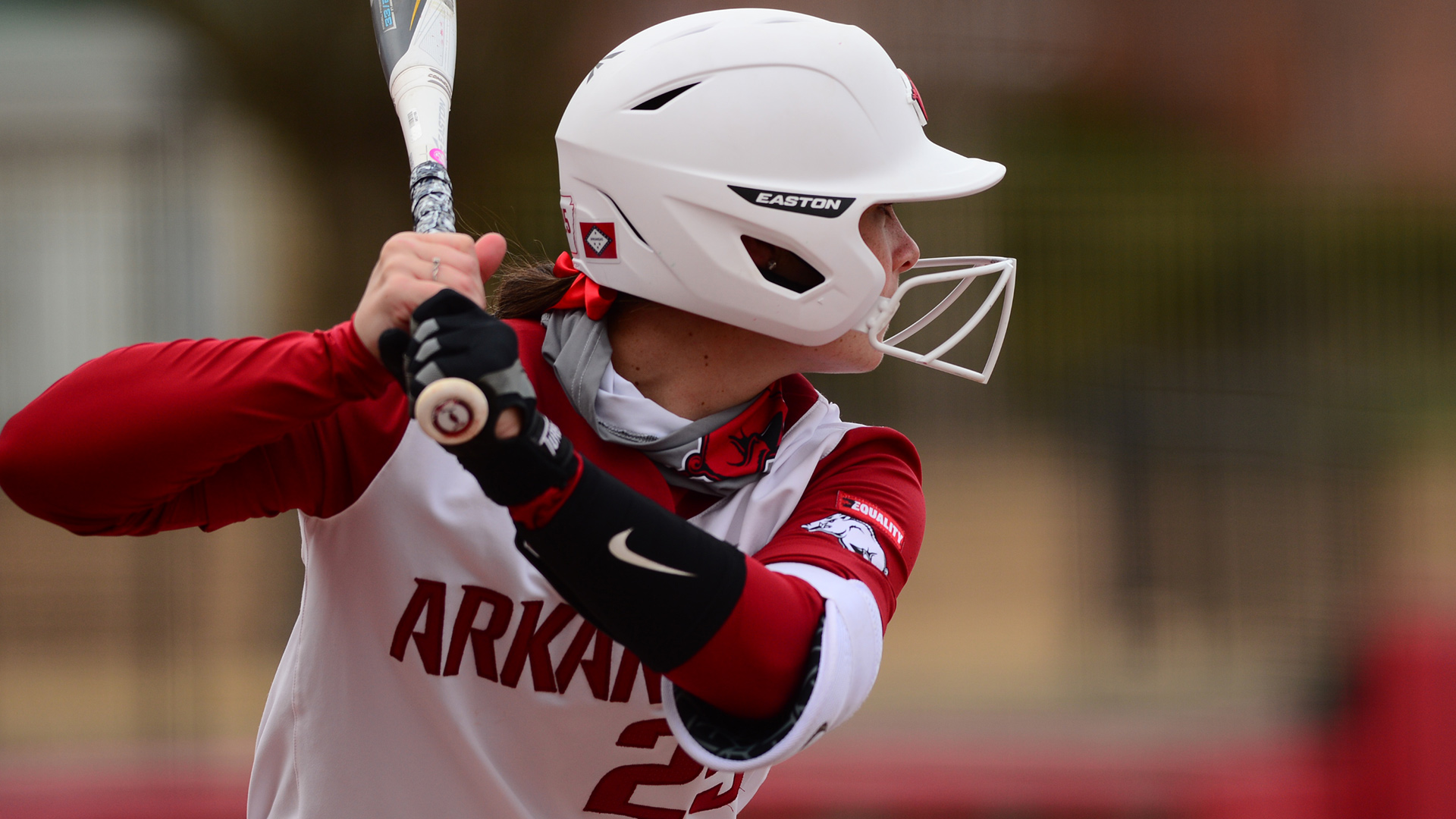 FAYETTEVILLE, Ark. – The Razorbacks pitching staff of Autumn Storms, Jenna Bloom and Mary Haff did not allow a run over two games, as No. 24 Arkansas swept North Dakota State, 9-0 (5), and, 5-0, in the Bogle Park home opener on Thursday evening.

Offensively, Arkansas (7-2) outhit the Bison (0-2), 19-4, and rocked three home runs. Infielder Danielle Gibson finished the night 4-for-7 with a triple, a run scored and two RBI while extending her hitting streak to nine games. Designated player Linnie Malkin continued her power surge in game one, smashing a three-run homer and posting a career-high five RBI.

The Razorbacks wasted no time jumping on the scoreboard posting a five run first inning. After infielder Braxton Burnside and Gibson singled with one out, Malkin torched her team-best fifth long ball of the year to center, putting Arkansas ahead, 3-0. Hot hitting freshman Hannah Gammill, who has hit safely in seven of her eight games played, went back-to-back with Malkin, hitting a solo job to left. The Beebe, Ark. product is hitting .360 (9-for-25) with four homers and nine RBI to start her collegiate career. Outfielder Larissa Cesena joined the hit parade, singling home a run on her first knock of the season.

A four spot in the bottom of the fourth shortened the game to five innings, as Malkin hit a two RBI double to left and Gammill cracked a two run single to right center. Gibson finished the game 3-for-3 with two runs scored and is hitting a team-best .444 (16-for-36) this season.

Storms (1-1) controlled the Bison lineup by pitching to contact and scattered just two singles. The veteran earned her first win of the season tossing 4.0 frames and striking out one while inducing nine groundouts. Jenna Bloom threw the last inning retiring the side in order with a strikeout. Paige Vargas (0-1) started for North Dakota State and allowed five earned runs in 1.0 inning.

Burnside jolted a two run dinger to center, opening Arkansas’ scoring in the third, grabbing a 2-0 lead. Gammill drove in another run with an RBI single in the fifth, and Gibson plated two on a sixth inning triple down the right field line as the Razorbacks coasted to a 5-0 win.

Mary Haff’s (3-1) complete game shutout with10 strikeouts was the story of the game. She allowed just two singles and two walks while lowering her ERA to 0.91 in 30.0 innings pitched this season. Lainey Lyle (0-1) worked all 6.0 innings for NDSU and walked three and struck out three.

𝗛𝗢𝗚𝗦 𝗪𝗜𝗡@HaffMary throws a complete game shutout allowing just 2 hits with 🔟 Ks in game two, as Arkansas shuts out the Bison in both games of the doubleheader sweep 🧹#WPS🐗 pic.twitter.com/ekaqjkRPFf

Arkansas returns to the Bogle Park diamond on Friday, Feb. 26 at 3 p.m. and 5:30 p.m. taking on Southeast Missouri and Texas Tech, respectively.