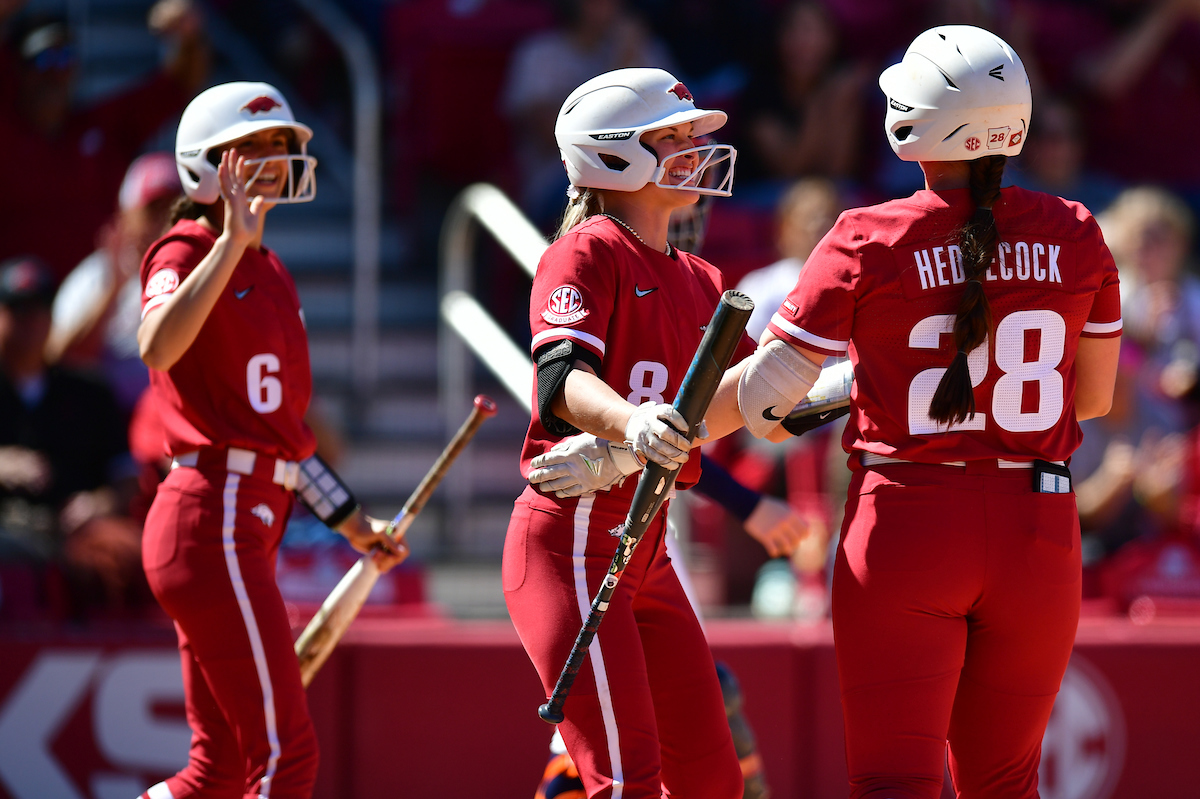 FAYETTEVILLE, Ark. – Entering as a pinch hitter in the late portion of a tied game, especially when one hasn’t swung a bat in hours, is one of the hardest challenges any softball player can find herself in.

That task wasn’t too arduous for sophomore Rylin Hedgecock, who found herself at the plate in the bottom of the sixth with one out and a speedy Cally Kildow at third. Down in an 0-1 count, Hedgecock sailed a fly ball deep enough to left to swiftly send Kildow home and secure No. 9 Arkansas its fifth-consecutive SEC series victory, defeating No. 17 Auburn, 4-3, in game two at Bogle Park. The Razorbacks improve to 27-7 overall and 8-3 in conference play.

Junior Chenise Delce (7-2) proved her poise in the circle yet again after throwing the game’s final 2.1 innings to seal her second win in as many days. In the top of the seventh with one out and a Tiger runner at third, Delce delivered back-to-back strikeouts to pull off the thrilling win. Altogether, Delce dealt four strikeouts while giving up zero runs on just one hit. After Auburn tied the game in the fifth, Delce entered the mound and forced a ground out to close the frame. A quick 1-2-3 top frame in the sixth by the Oklahoma City product carried the momentum back to the Hogs.

“I was really just trying to remind myself to breathe and take it one pitch at a time,” said Delce. “I have great defense behind me, so all I had to do was go right at them. That final out was filled with excitement knowing we won the series and have a chance to go for a sweep tomorrow.”

Offensively, senior Danielle Gibson pieced together a 2-for-3 performance, including a two-run bomb to center in the first and a knock through the right side in the third. Hannah Gammill drove in the Razorbacks’ third run on a single through the left side in the third. KB Sides, Audrie LaValley and Sam Torres tabbed one hit apiece.

Sophomore Callie Turner got the start for the Hogs, surrendering one unearned run and two hits while fanning one before turning the keys over to sophomore Jenna Bloom. In over three innings, Bloom struck out four batters.

The Razorbacks will look to capture their third-consecutive series sweep over the Tigers Sunday.

Auburn took an early 1-0 lead in the top of the first, but Arkansas answered back in the bottom frame. After 13 pitches, Taylor Ellsworth was issued a two-out walk. Gibson then knocked her 14th home run of the season on a shot to deep center to put the Hogs in front.

The score remained the same until Gammill’s two-out, RBI single down the left field line pushed the lead to 3-1 in the third.

Auburn tied it up in the fifth, but the Razorbacks didn’t back down from the challenge. Linnie Malkin walked to get Arkansas’ offense going in the sixth. Kildow entered the game to pinch run for Malkin before Torres laid down a perfect quick bunt that caught Auburn off guard, putting runners at first and second with nobody out. Audrie LaValley laid down a perfect sacrifice bunt to advance the runners a bag. With one out, Hedgecock pinch hit and soared a sacrifice fly to left to score Kildow and secure a 4-3 win.

The series finale against Auburn is scheduled for 1 p.m. Sunday on SEC Network+.