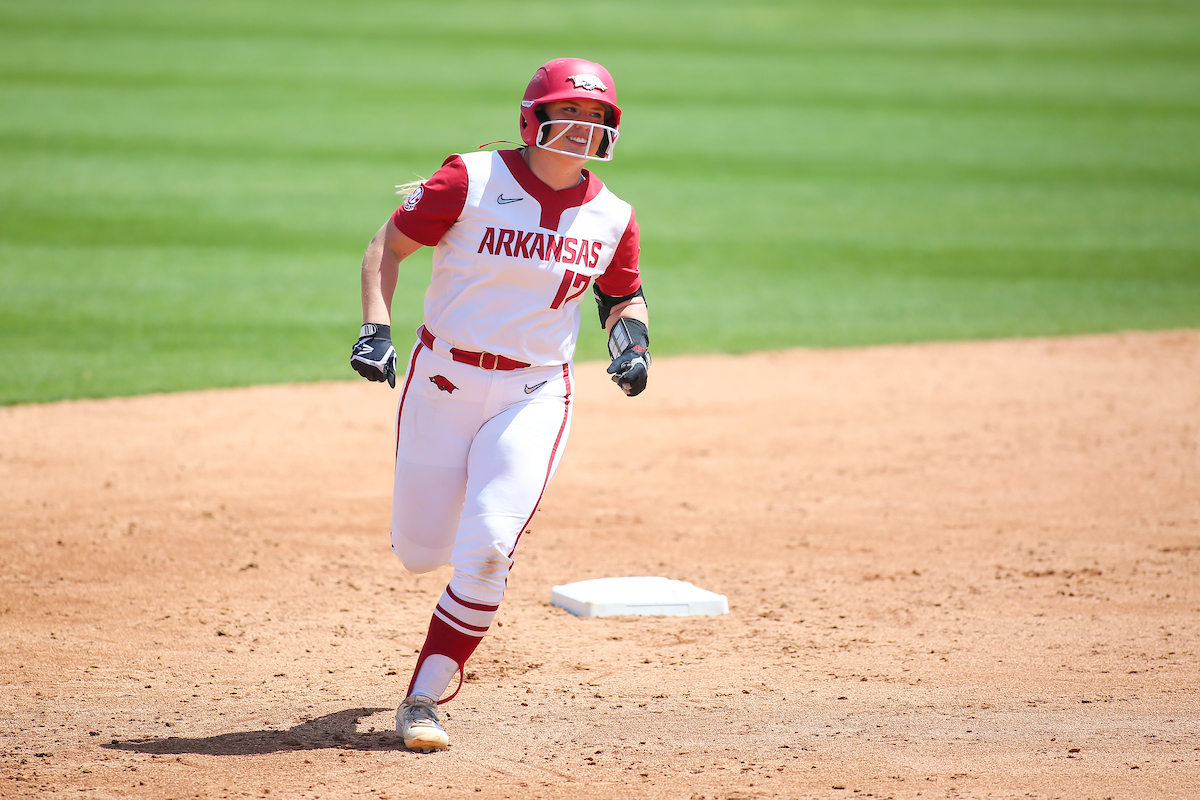 FAYETTEVILLE, Ark. – It was a record-breaking afternoon at Bogle Park Sunday as No. 9 Arkansas earned its third-consecutive series sweep over No. 17 Auburn, pulling off a commanding 17-4 (5) win.

Senior Hannah McEwen continued her record-crushing senior campaign as she became the program’s all-time runs scored leader (185). Graduate Taylor Ellsworth set a new career-high in RBIs with six and tied her career-high in home runs with two, including a grand slam. Senior KB Sides and freshman Kacie Hoffmann tied their career-highs in RBIs with five and three. The Razorbacks’ 17 RBIs tie for the third-most in single game program history. Arkansas also set a new series attendance benchmark with 6,947 reported throughout the three-game series.

Senior Mary Haff (12-3) penciled her 89th career win after spinning 3.2 innings and handing out three strikeouts. The Winter Haven, Fla., native threw a quick 1-2-3 inning in the first and didn’t give up a single hit until the fourth. Junior Chenise Delce took over reins in the fourth to close the top frame with a strikeout. Delce struck out all four hitters she faced to end the game.

Sides was a force at the leadoff spot, roping a two-run home run and a bases-loaded triple to grip five RBIs. Ellsworth dominated by smacking a grand slam and two-run blast to account for six RBIs. Hoffmann tattooed a three-run jack for her fifth career home run. Danielle Gibson, Hannah Gammill and Linnie Malkin each notched a hit. 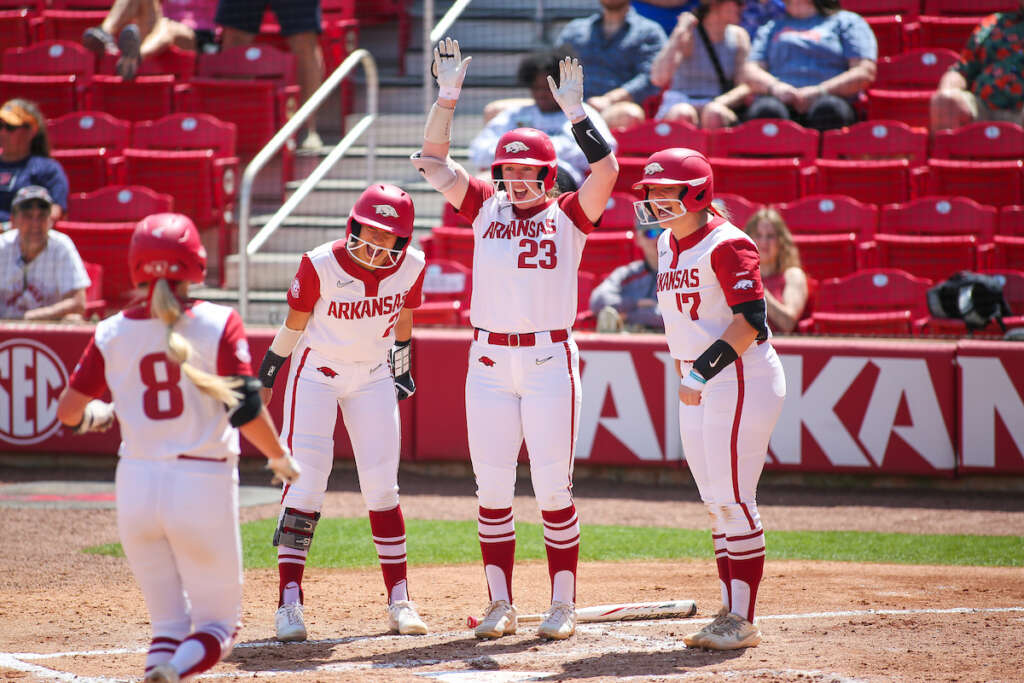 The Hogs improve to 28-7 and 9-3 in SEC play, cruising to their fifth-straight SEC series win and fourth of the season while holding possession of first place.

Arkansas outscored Auburn 28-11 in three games while outhitting the Tigers at a 24-16 clip. Six different Razorbacks recorded at least one of Arkansas’ nine home runs over the weekend with Ellsworth and Malkin leading the way with three and two apiece.

The Razorbacks showcased near perfect defense with just one error in three games. The pitching staff issued 25 strikeouts and held Auburn to a .222 batting average.

How It Happened
Arkansas got on the board early in the first thanks to some two-out magic. After Ellsworth reached on an error, Gibson sent her home on base hit to right. Gammill pounded a single to left to put runners on the corners. Malkin ripped an RBI single down the left field line to put the Hogs in front 2-0. Next, Hoffmann clocked a three-run shot to move the lead to 5-0.

Valerie Ventura walked to begin the second before Sides cracked a two-run missile to center, extending the lead to 7-0. The Hogs got their final two runs of the frame on Ellsworth’s two-run jack.

After loading the bases with one out, Ellsworth clobbered a grand slam for her second home run of the game to push the lead to 13-0.

After Auburn scored four in the fourth, Arkansas responded with walks issued to Malkin, LaValley and Hedgecock to load the bases for Sides. Sides delivered a triple to left center, giving the Hogs a 16-0 edge. The final run of the game came off the bat of McEwen, who belted a sacrifice fly to left, scoring a scorching Sides in from third.

Hog Highlights
• The Razorbacks 17 RBIs tie for the second most in program single game history
• Arkansas’ 17 runs tie for sixth most in program single game history
• Taylor Ellsworth tied her career-high in home runs with two
• Ellsworth notched her second multi home run game of the season
• Ellsworth accounted for the Hogs’ sixth grand slam of the season
• Hoffmann tied her career-high in RBIs with three
• Sides tied her career-high in RBIs with five
• Delce gave up zero runs in all three appearances over the weekend
• Arkansas secured its third-straight series sweep over Auburn
• Ellsworth’s grand slam is the second by a Razorback this week
• The Hogs seized their first conference sweep since downing No. 20 Georgia on April 16-18, 2021
• Arkansas grabbed its first home conference sweep since taking three from Mississippi State on March 26-28, 2021
• The Razorbacks collected their ninth run-rule victory of the season

Up Next
Arkansas hosts SEMO for a doubleheader Tuesday, beginning at 4 p.m. on SEC Network+.