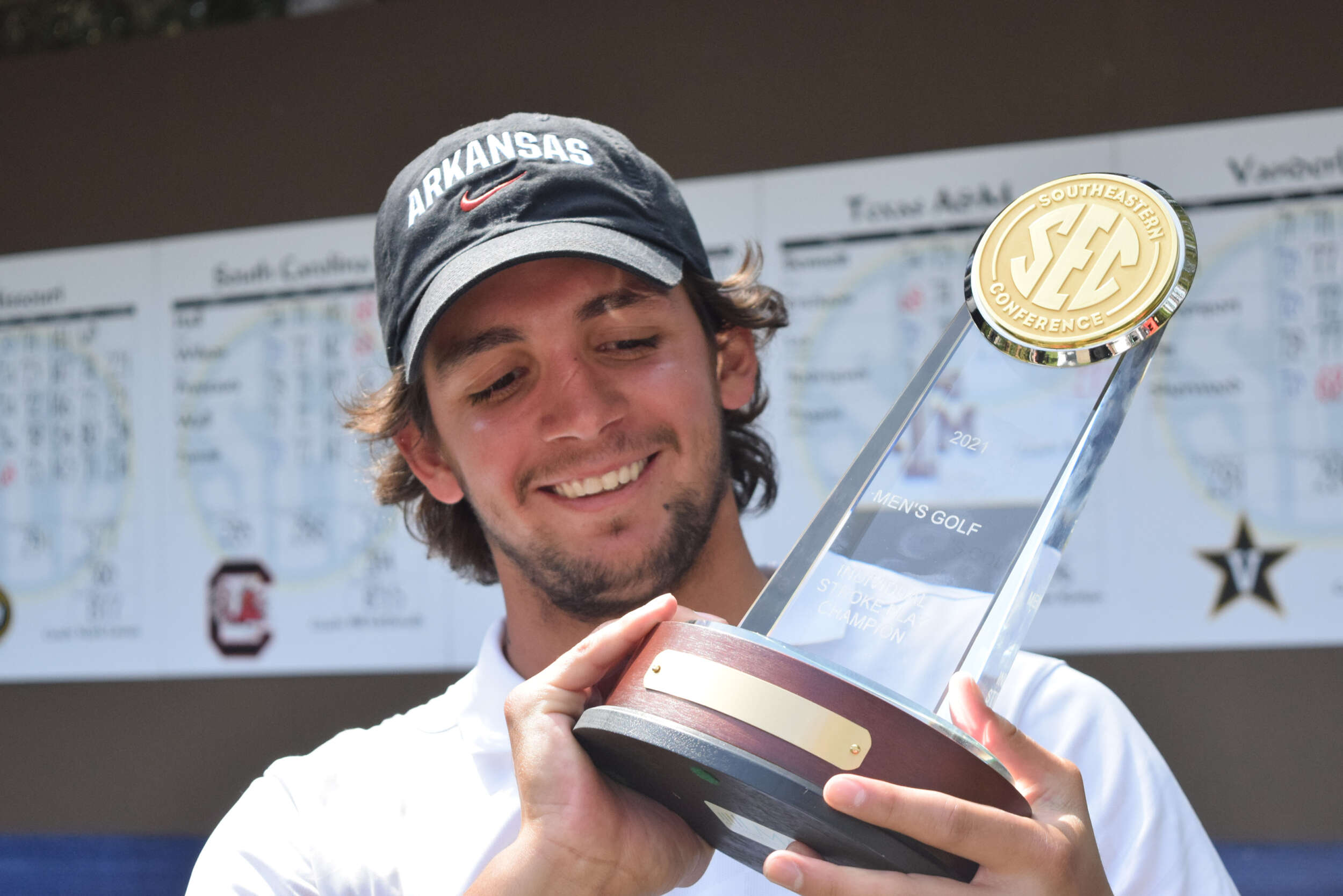 ST. SIMONS ISLAND, Ga. – Arkansas junior Segundo Oliva Pinto fired a final-round 68 to become the third Razorback to win the SEC Championship individual title. The 22nd-ranked Razorbacks finished fifth with a score of 852 and will face #4 seed LSU in the SEC match pay quarterfinals Saturday, starting at 7:30 am ET/6:30 am CT.

This was the 11th straight year the SEC Championships have been played at Sea Island Golf Club’s Seaside Course (par 70, 7,0005-yards) and Oliva Pinto posted one of the best 54 hole results in both the program’s history at the venue as well as in school history overall.

Oliva Pinto entered the final round one stroke off the lead – and one stroke ahead of third – after suffering a double bogey on his final hole in round two. However, he opened the final round with a birdie to tie 36-hole leader and one of his playing partners, Spencer Ralston of Georgia, for the lead. On the next hole, Ralston bogeyed, and Oliva Pinto led the rest of the way.

Oliva Pinto opened his lead with a birdie on the par-4, 4th hole. He dropped a shot on the sixth hole but bounced back with birdies on holes seven and nine to lead by four shots at the turn. Both he and Ralston had a bogey on the 12th hole. Oliva Pinto parred out for his 68 but Ralston kept things interesting with birdies on holes 13 and 17 to get to within two strokes. However, both players recorded a par on the final hole to secure the two-stroke win for Oliva Pinto.

This is the second conference title in as many tries for Oliva Pinto. The Argentinian won the Colonial Athletic Association title in a playoff as a freshman while playing at UNC Wilmington. No conference tournaments were played last spring due to COVID-19.

“All week Segundo drove the ball great,” said associate head coach Barrett Lais. “He played really smart, he hit all his lines. Basically, when he got inside 150 yards, he went after the pen. It was perfect golf. To be honest, as long as I didn’t point in the wrong direction, he was going to hit it straight and be in the right position. I’m really proud of him. He handled the pressure. Spencer played great, made some putts coming down the stretch and tightened it up. Segundo did a good job of just staying focused and going through his pre-shot routines.”

Not to be lost in the winning performance was the play of William Buhl. The fifth-year senior had back surgery last fall and turned his second top-20 finish in three trips to the SEC’s. While he shot a 4-over 74 in the final round to drop from ninth to 20th, Buhl tied for 20th with a 54-hole score of 214, which ties for the 11th-best score by a Razorback in school history. His opening-round 69 was his fourth round in the 60’s at the SEC Championship, tying the school record held by Cappelen and Still.

Arkansas was second after round two, but dropped to fifth after a final-round, 8-over 288. Tenth-ranked Georgia won the stroke play with a 2-over 842 while three teams tied for second – two stroke ahead of Arkansas – including #37 Alabama, #19 Tennessee and #23 LSU. Arkansas held off #13 and sixth-place Vanderbilt by one stroke while #48 South Carolina and #11 Texas A&M round out the eight teams advancing to match play.

Arkansas will send out (in this order) Buhl, Julian Perico, Tyson Reeder, Oliva Pinto and Manuel Lozada for its quarterfinal match. The winner will face the winner of Georgia (top seed) and Texas A&M (eight seed) in the semifinals later Saturday afternoon. 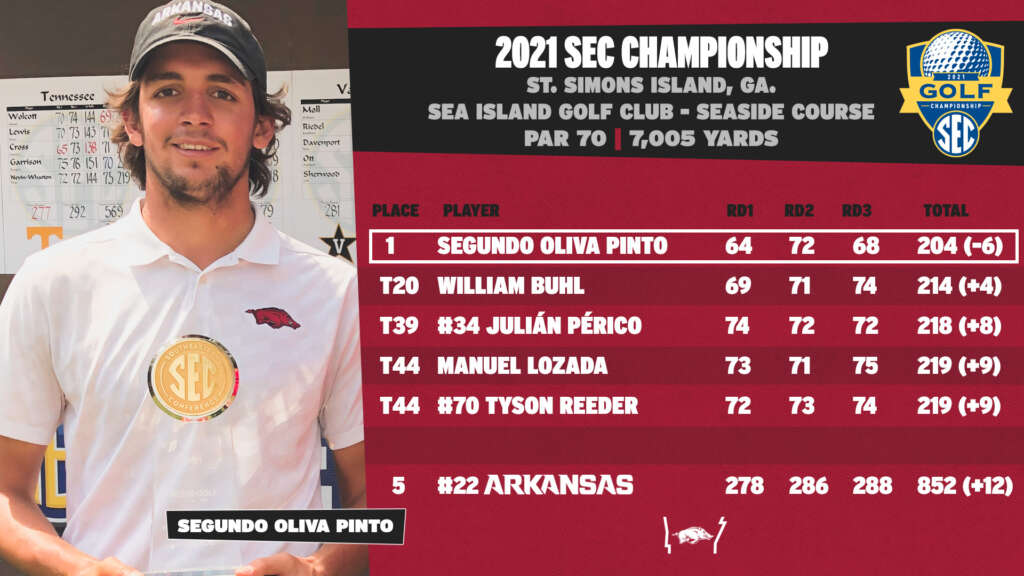