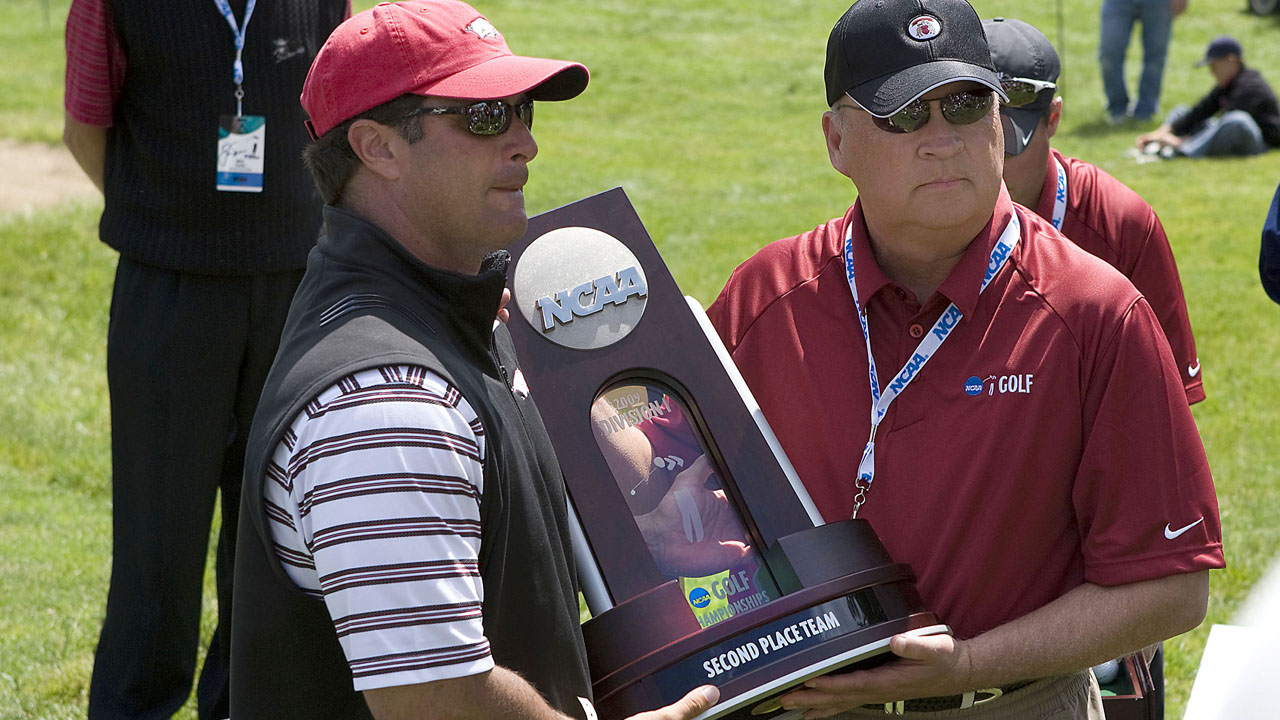 ON THIS DAY: Arkansas Finishes Runner-Up at 2009 NCAA Championship

May 30, 2009 (Toledo, Ohio) – Arkansas finished as the 2009 NCAA Men’s Golf Championship runner-up as the Razorbacks and Texas A&M Aggies battled to the final putt on the 18th green to decide the winner.

Arkansas tied for third after 54 holes of stroke play to advance to match play. The Razorbacks defeated Washington in the quarterfinals and Georgia in the semifinals to face the Aggies in the Championship, held at Inverness Club.

With Arkansas tied at 2-2 with Texas A&M, Razorback and #ProHog Andrew Landry did the improbable as he rallied from four down to even in his match play dual with the Aggies’ Bronson Burgoon heading into the final hole. Unfortunately, Landry could not do the impossible, which was sink a long birdie putt to match Burgoon’s tap-in birdie, as A&M won the 2009 NCAA title.

Landry hit a perfect drive down the middle of the par-4 18th hole, but Burgoon pushed his tee shot into the right rough. Landry’s approach came to rest on the front fringe about 30 feet from the hole. After Burgoon slashed his second shot out of the rough, the ball landed on the green and trickled toward the hole, almost going in before stopping six inches from the cup.

The match came down to the No. 1 players for both teams after Arkansas’ No. 4 and 5 players (Jamie Marshall and Jason Cuthbertson) won their matches.

The runner-up finish for Arkansas capped off one of the most impressive seasons in school history and the campaign to the championships was loaded with tournament victories, individual accolades and consistent top 20 rankings.

For the year, Landry and #ProHog David Lingmerth each had four top 10 finishes. Landry led the team with a stroke average of 72.39, and Lingmerth came in at 73.04. Other Arkansas key players included seniors Will Osborne, Allen McFerram and Jason Cuthbertson; sophomores Jamie Marshall and Sam Chavez: and freshmen #ProHog Ethan Tracy and Chris Arvidsson.

Arkansas had a second-place finish at the SEC Championships with a 2-under 862. It was the best performance for the Razorbacks since they took the title thirteen years ago in 1995. McMakin was named SEC Coach of the Year, Landry earned All-SEC first team honors, Lingmerth was selected to the second team and Tracy was named to the SEC All-freshman team.