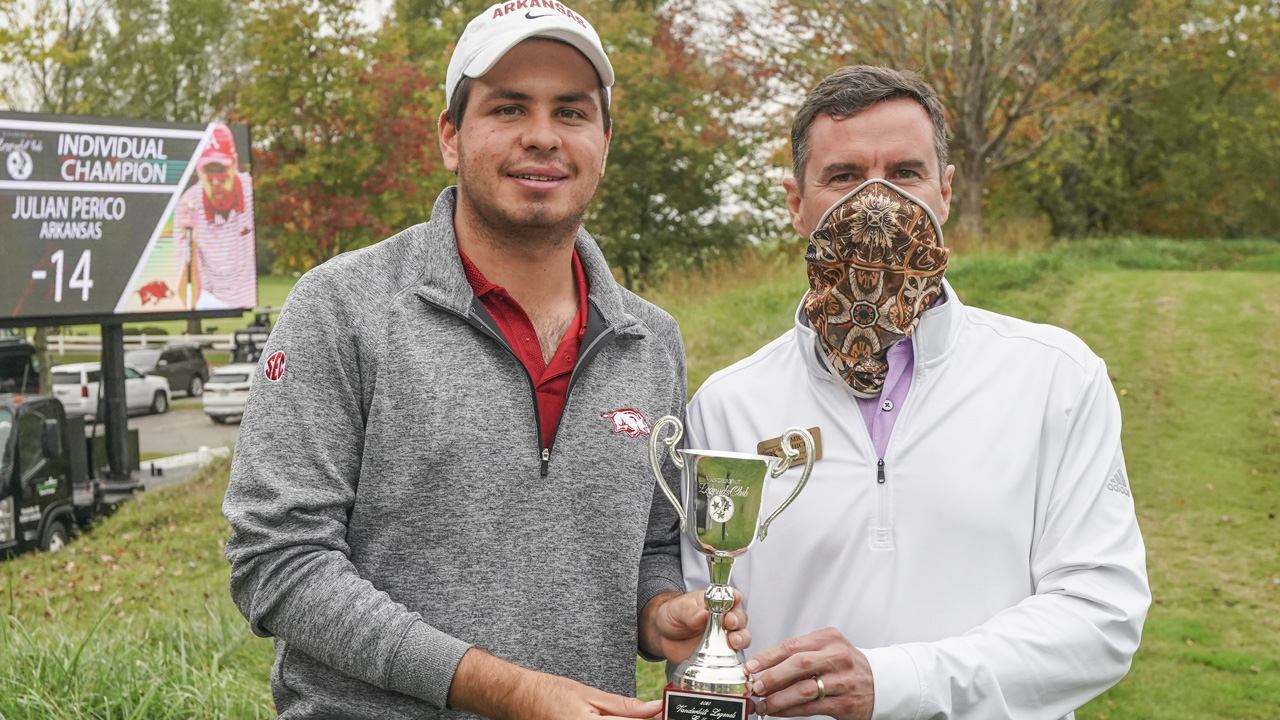 FRANKLIN, Tenn. – Julian Perico eagled the 18th hole for the second time in three days to win the Vanderbilt Legends Collegiate, played at VU Legends Club North Course (par 71, 7,221 yards). The Razorbacks posted a three-day total of -21 (272-20-279=831) and finished tied for six in the SEC-only field of 14 with Vanderbilt claiming the team title.

Perico was 2-under par for the day and finished with a 14-under-par score of 199, marking the second time in his career he has broken 200. Perico held off Vanderbilt’s John Augenstein (#18 in the World Amateur Golf Ranking) and defeated Georgia’s Davis Thompson (#3 in the WAGR) by three strokes.

“I am very proud of Julian,” said Arkansas head coach Brad McMakin. “He was in control of his game and emotions this week. All wins are huge. Then considering this field, I can’t express how impressive it is for any golfer to get a win. This was not only great for Julian but for our program as well.”

Perico was tied with clubhouse leader Alex Goff (Kentucky) – winner of the Blessings Collegiate Invitational earlier this month – going into the final hole. Perico launched a 2-iron off the cart path for his second shot on the 527-yard, par-5 18th hole and reached the green in two. He then sank a 20-foot putt to get to -14 and hold the clubhouse lead.

From there it was a waiting game as Augenstein and Brandon Smith (Texas A&M) were still on the course in striking distance with two holes to play. Augenstein came to 18 at -12 but had to settle for a birdie and finished in second. Smith birdied 17 to get to -12 with the reachable 18th remaining. However, Smith took a par and tied for third with Goff.

In addition to Perico’s heroics, graduate senior Mason Overstreet shined in the final round. He posted a 4-under-par round of 67 – tying for the third-best round of the day – and climbed 18 spots to finish in a tie for 37th (72-73-67=212/-1). Overstreet started fast with birdies on his first two holes, but dropped shots on holes three, six and seven. However, he played the final 11 holes bogey-free with five birdies, including holes 17 and 18. His final-round push was not uncommon as he posted a 69.3 scoring average in final rounds last season.

Segundo Oliva Pinto also finished under par for the event. The junior tied for 27th with a score of 209 (-4). He finished with 16 birdies to lead the team and post the third-best total in the field.

Denver Davis closed strong and was solid in his collegiate debut, tying for 46th with a 54-hole score of 214 (+1) thanks to rounds of 70-73-71. The Fayetteville native was 3-over after 13 holes before posting birdies on holes 14, 17 and 18 for an even-par round of 71 and help lift the Razorbacks from eight into a tie for sixth.

The Razorbacks will play their third and final event of the fall Nov. 9-10 at the annual Jerry Pate National Intercollegiate, contested in Vestavia Hills, Ala., at Olf Overton Club. – site of Perico’s first collegiate win. 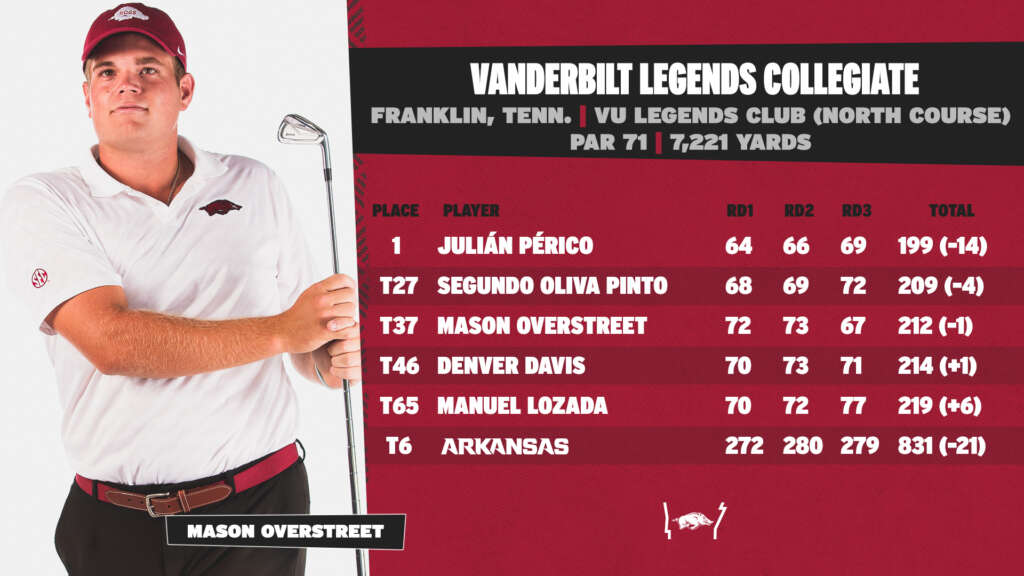