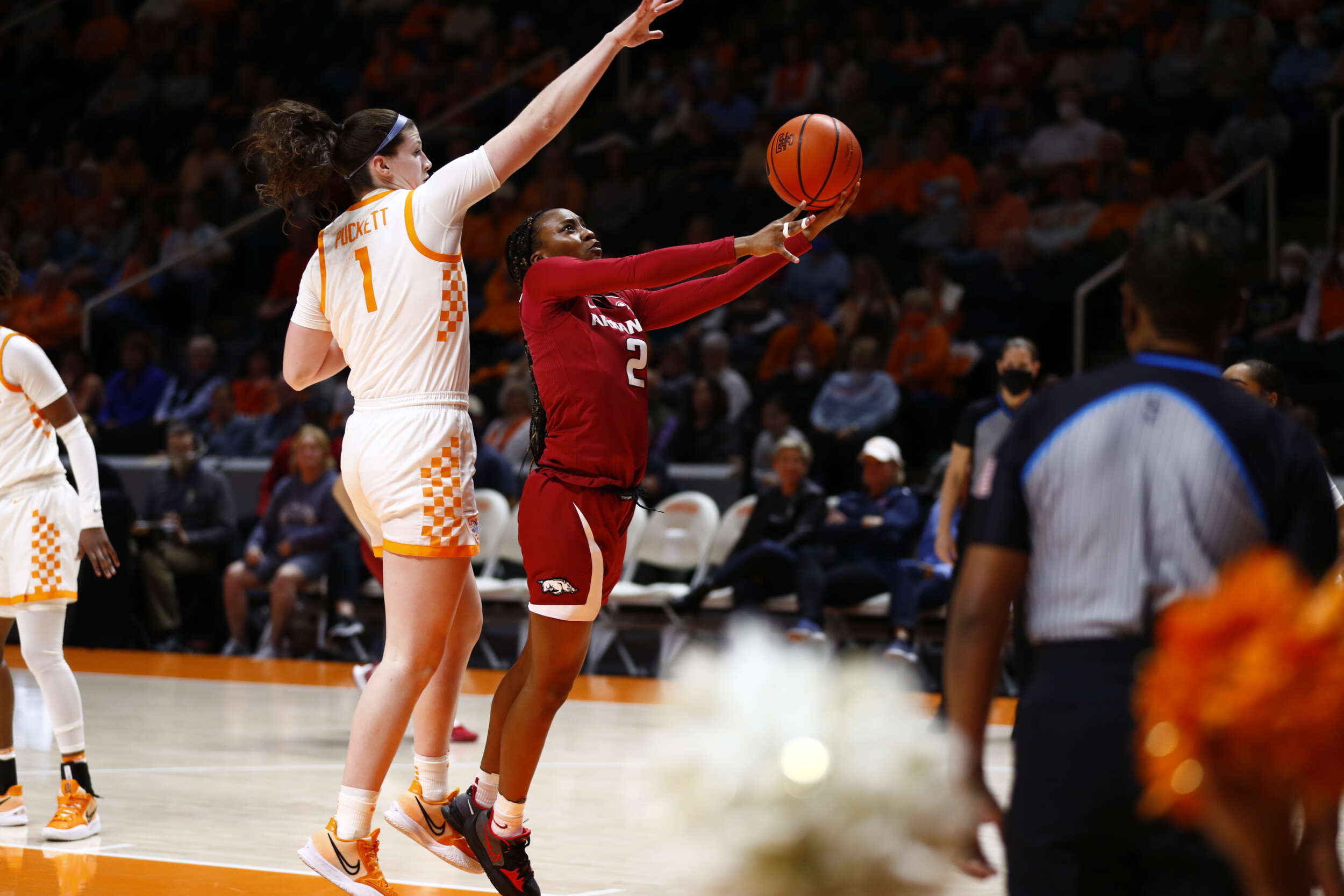 FAYETTEVILLE, Ark. – Arkansas Women’s Basketball (14-7, 4-4 SEC) dropped a Southeastern Conference road contest at #7 Tennessee (19-2, 18-1), 86-83, in overtime on Monday. Arkansas, winners of its previous three games, did not trail in the first half, leading by as many as 11 against the Lady Vols. The Razorbacks took a nine-point, 41-32, lead into the halftime locker room, but a second-half surge saw Tennessee catch Arkansas late in the fourth stanza.

Redshirt senior guard Amber Ramirez dropped in a season-best 29 points to lead all scorers. She was one of four Razorbacks in double figures as Samara Spencer added 17 points, Jersey Wolfenbarger scored 13 points and Sasha Goforth tallied 10 points in the loss.

TURNING POINT
Despite being the visiting team, Arkansas looked the more at-home to start the game. The Hogs grabbed the lead from the start and did not relent it the entire first half, thanks to 14 first half points from Ramirez. The Razorbacks went on a run toward the end of the first half to further stretch the lead, and Arkansas had a nine-point lead on the No. 7 team in the nation headed to the locker rooms.

Tennessee began to make a push in the third quarter, cutting Arkansas’ lead to five with the final 10 minutes to play. That set the stage for a neck-and-neck fourth quarter, which saw the Lady Vols take their first lead of the game with about seven minutes to play. The Razorbacks and Lady Vols matched each other blow for blow in the final stretch, as Wolfenbarger knocked down a clutch three-point shot to retake the lead, and Ramirez sliced through the lane to make a layup in traffic to keep Arkansas close. The Hogs were steady at the stripe to close out regulation, going 7-7 from the free throw line to end the quarter and force overtime at 75-75.

Overtime was a physical affair with each team striving for a win for different reasons; Arkansas with a chance to upend back-to-back ranked teams and Tennessee looking to avoid a second-straight loss. The hometown Lady Vols were the first to make a move, but freshman Samara Spencer splashed a three-pointer to keep Arkansas within arms reach. The Razorbacks had a chance down by three with under ten seconds left, and Ramirez had a look in the corner to tie it, but the attempt fell short and Arkansas, despite controlling the majority of the game, left Knoxville with the loss.

UP NEXT
Arkansas takes on Texas A&M in College Station, Texas, Thursday, Feb. 3, in an 8 p.m. tip. The game airs live on the SEC Network. The Razorbacks return home hosting Auburn, Feb. 10, as the season continues.