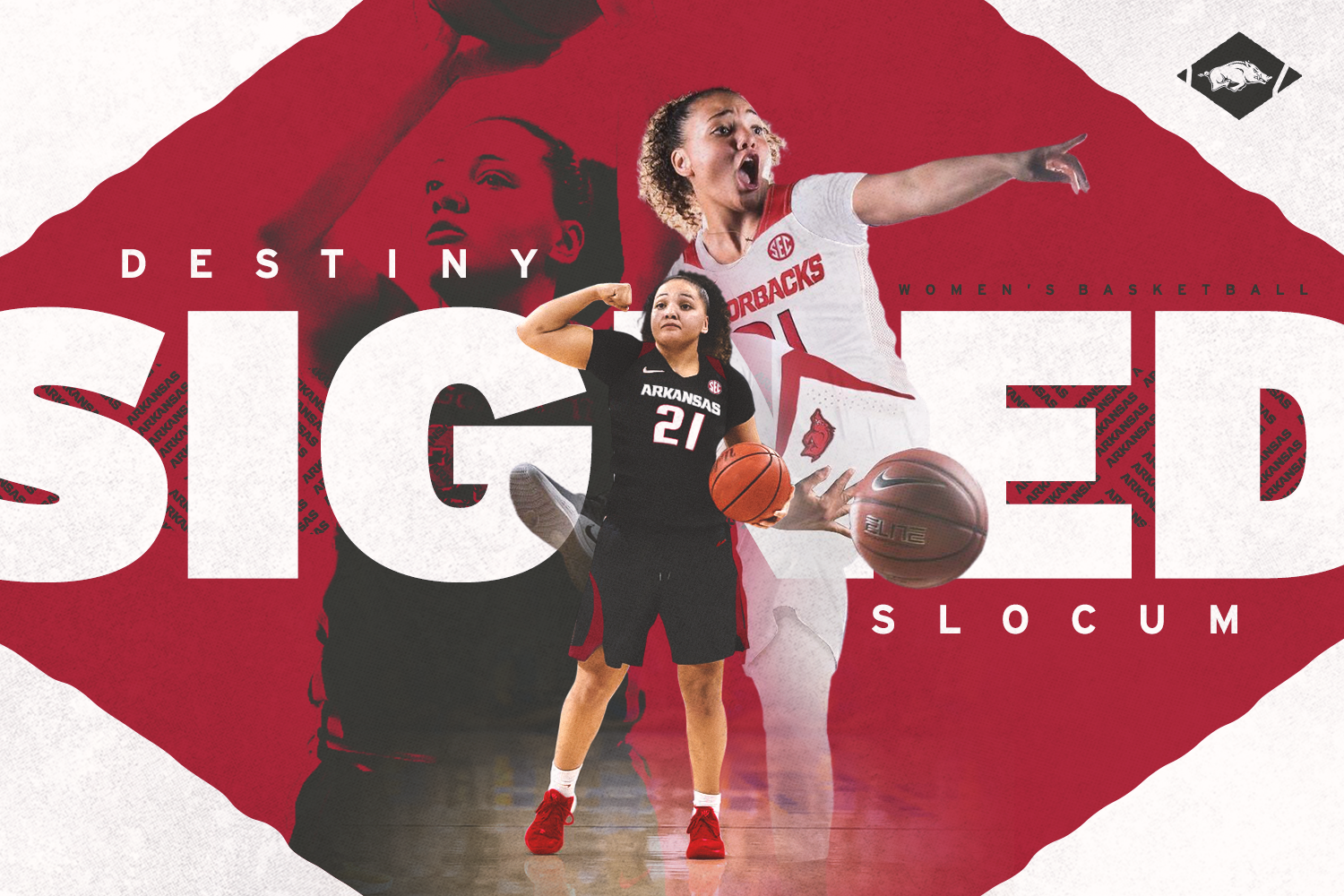 FAYETTEVILLE, Ark. – Arkansas Women’s Basketball and Head Coach Mike Neighbors announced the signing of Graduate Transfer Destiny Slocum Monday, April 20. The former Oregon State standout will finish out her collegiate eligibility on the Hill as a Razorback. She will be immediately eligible as a grad student.

“She’s one of US,” Neighbors said. “Hopefully, we have earned your trust the last three seasons. So, trust us when we say that she is the perfect fit in our locker room, for our city, for our state and for the SEC. Our recruiting relationship has had more twists and turns than the Pig Trail between Ozark, Brashears and Huntsville, but we’ve never lost that connection. The circumstances never aligned for us to coach her. Not until now. We have seen her play the maximum number of games the NCAA permits and can say to our fans with certainty that y’all have every reason to be excited. Over the next eight months, we can tell the stories about every twist and turn, but for now, let’s just welcome our newest Razorback to the Arkansas family.”

The Razorbacks are adding an absolute weapon at lead guard in Slocum, who, in her two years at Oregon State, averaged 15.2 points per game, 4.6 assists per game and 3.2 rebounds per game, while shooting at a 45.2 percent clip from the field and 36.8 percent from deep. As a result of her stellar play, the Meridian, Idaho, product racked up plenty of accolades as a Beaver, being named a WBCA All-American Honorable Mention in both of her seasons in Corvallis, while also being named All-Pac-12 twice over. On top of it all, Slocum was named a Lieberman Finalist, the award given to the best point guard in women’s college hoops, during her redshirt sophomore season. She made the top 10 for the Lieberman award this past season.

Slocum’s stats were anything but hollow, though, as she helped lead Oregon State to a combined 49-17 record during her time there, including a run to the Sweet 16 during the 2018-19 season. Oregon State finished the 2019-20 season at 23-9 and ranked 14th in the AP Poll.

Before her time at Oregon State, Slocum was a freshman sensation at Maryland, where she was named the WBCA National Freshman of the Year after averaging 11.5 points, 6.0 assists and 3.0 rebounds during her lone season in College Park. Additionally, Slocum was named the Big Ten’s Freshman of the Year by both the media and the coaches, while also garnering Second-Team All-Big Ten Honors. Maryland was a force during Slocum’s lone season there, as the Terrapins finished the season 32-3, falling in the Sweet 16 to Oregon.

Slocum was a highly touted recruit coming out of Mountain View High School, as she was a McDonald’s All-American, a WBCA High School All-American, while also taking part in the Jordan Brand Classic. Slocum was named Idaho’s Gatorade Player of the Year during both her junior and senior seasons, seasons in which she led her Mavericks to back-to-back 5A state titles.

Slocum will be joining a veteran-laden team on the Hill next season, as the Hogs will return three fifth-year players, in Chelsea Dungee, Amber Ramirez and Jailyn Mason, as well as seniors Taylah Thomas, Macy Weaver and Grayce Spangler.