SCOTTSDALE, Ariz. – Graduate seniors Tyson Reeder, William Buhl and Mason Overstreet played the back nine at 3-under-par – each at 1-under – to help Arkansas secure a berth to the fourth round of the NCAA Championship Monday. The Razorbacks finished round three in a tie for 13th (868) with Texas Tech as the top 15 teams move on for an opportunity to reach the top 8 and advance to match play.

“Today was a difficult day but I was really pleased with the way our guys handled the pressure,” said head coach Brad McMakin. “We had to have a good day. We got off to a slow start but I’m proud of the way we battled on the back nine. Tyson and William showed great poise and played like the experienced players they are.

“I also can’t say how impressive Mason’s round was. I mean he did not play this course for two days and he had no idea how firm and fast the greens had gotten since the practice round. The fact that he shot 1-under on the difficult back nine showed his grit. I said going in that we had as deep a team as this program has ever had and Mason proved it today.”

Arkansas and Texas Tech were tied for 14th entering the third round. The Red Raiders got three birdies on the 17th hole, including back-to-back birdies by Ludvig Aberg on the closing two holes, to secure their berth with Arkansas. Both squads were as low as 29th at one point late in the round. Being in the morning wave, both teams had to wait and watch the afternoon wave slowly come back to the field.

The Hogs, Red Raiders and the winner of a Monday morning playoff between Georgia Tech and TCU will be grouped together for the final round. They will tee off at Noon (CT)/10 am (PT) off hole #10. The top eight teams after Monday’s round will advance to match play.

Reeder, who climbed 21 spots on the individual leaderboard was the low Razorback Sunday, posting an even-par 70. He birdied the par-5, 4th hole but suffered bogeys on holes six and seven. He added a bogey on the par-3, 13th hole but immediately answered with a birdie on 14. He then stuck his approach to 10 feet on the 17th and drained the birdie putt before posting a par on 18 for his round of 70. For the Championship, Reeder is tied for 34th at +5 (72-73-70=215).

Buhl turned in his third-straight, 2-over-par 72 and he is tied for 41st at 216 (+6). He was 3-over after nine holes but opened the inward nine with back-to-back birdies. He fell back to 3-over with a bogey on 12 and had a putt just miss on 17 for a bogey. The Fairhope, Ala., native ripped his drive on the 520-yard, par-4 down the right side of the fairway. He then hit approach to the front on the green, but, with the fast and firm surface, his ball rolled to eight feet and pin high. Buhl stepped up and drained the putt for a closing birdie which was the difference to propel the Hogs to the final round.

Overstreet opened with a pair of pars but went on to bogey four of his next seven to make the turn at +4. After five pars, The Kingfisher, Okla., product on the 450-yar, par-4 15th. Two holes later he birdied 17. However, after a good drive on 18, his approach went off the back of the green and he had to settle for a bogey for a 3-over-par round of 73. 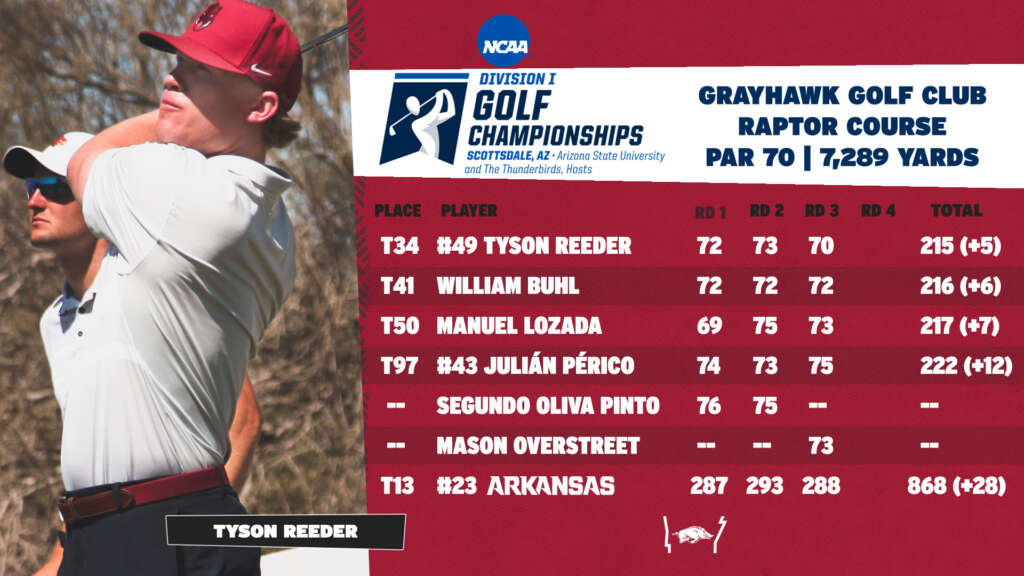