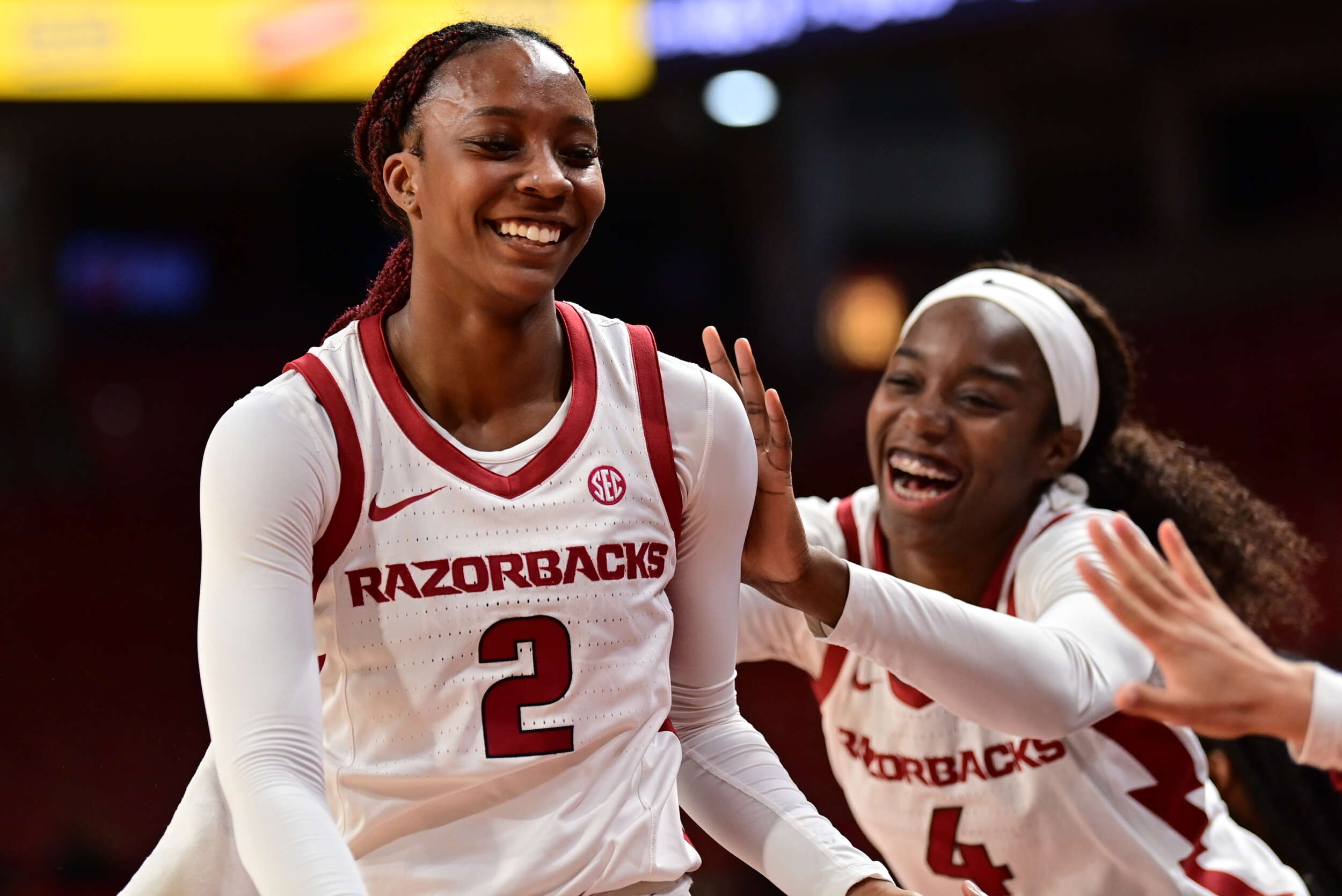 FAYETTEVILLE – The Arkansas women’s basketball team (10-0) is continuing to roll, taking down Oral Roberts (2-7) on Sunday, 92-58. Arkansas outscored ORU 51-21 in the second half, after it was a four-point differential at halftime. Samara Spencer scored a career-high 32 points on her birthday, while Saylor Poffenbarger earned her first career double-double off 14 points and 13 rebounds. Arkansas is off to its best start since 2013 and continue to stay undefeated with five games left in the non-conference slate.

Arkansas began the game with turnovers on their first two offensive possessions, but the birthday girl, Spencer, got the Razorbacks going with a 3-pointer. Oral Roberts went 0-for-10 from the field with Arkansas getting a hold of three of those shots with blocks. Erynn Barnum and Poffenbarger came up with layups prior to the media timeout, as Arkansas had the 15-8 edge with 4:21 left in the quarter. The Razorbacks fell in a scoring drought for nearly three minutes until Spencer hit 1-of-2 free throws and followed that up with a 3-pointer to extend the Razorback lead to 10. Arkansas took the 22-16 lead through one quarter.

Barnum opened the quarter with a layup, but ORU went on a 4-2 run to cut the lead to six. A Chrissy Carr triple and Spencer driving layup put the Razorbacks up by 11 with 7:31 remaining in the quarter. ORU was 0-for-4 from the field until the Golden Eagles converted on their next three possessions to cut the Arkansas lead to seven, 37-30, with 3:18 remaining in the half.

Arkansas was 0-for-6 from the field until Maryam Dauda delivered off a putback basket. ORU made 5-of-7 field goals down the stretch, including a 3-pointer to cut the deficit to four going into the break with the Razorbacks ahead, 41-37.

The Razorbacks commenced the second half on a 9-2 run, which was sparked by a Jersey Wolfenbarger layup off a nice drive to the basket. Arkansas led by nine, 50-41, with two minutes and some change into the third frame. The Razorbacks cruised on a 7-3 run with big thanks to Spencer’s two 3-pointers, to lead 57-44 at the media timeout. Arkansas continued to roll and after Spencer’s sixth 3-pointer of the game, the Razorbacks found themselves ahead, 72-47. The Razorbacks outscored the Golden Eagles 32-10 in the quarter.

Arkansas entered the fourth quarter with a 73-47 lead. The Razorbacks got off to 10-2 run, sparked by a Poffenbarger 3-pointer. At the media timeout, Arkansas was up 86-53 with five minutes and some change left in the game. The Razorbacks won 92-58.

Arkansas is set to host Lamar next Thursday, Dec. 8 to continue on its four-game homestand. Tipoff is set for 7 p.m. at Bud Walton Arena with coverage of the game being broadcast on SECN+.