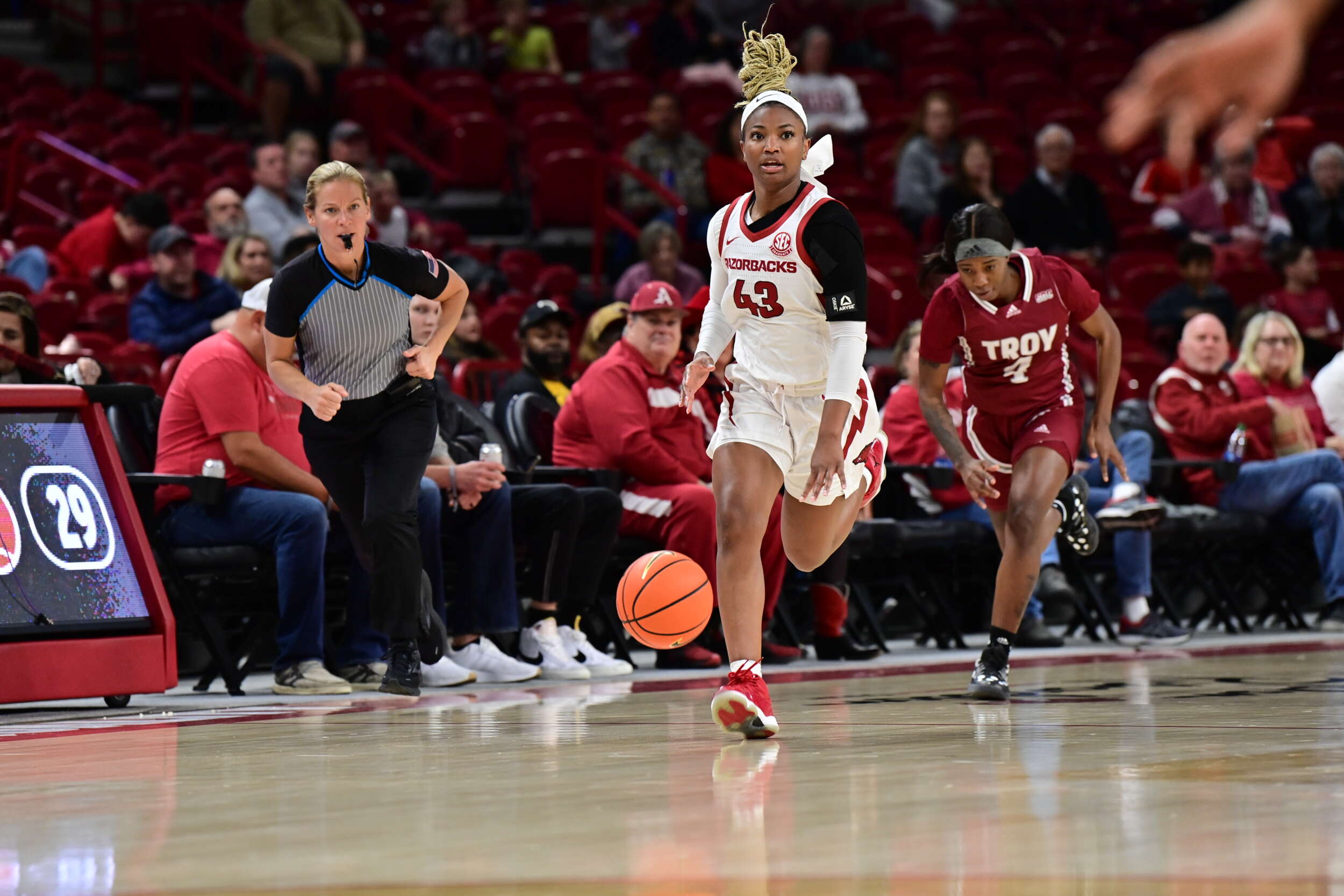 FAYETTEVILLE – Arkansas women’s basketball (9-0) is continuing to roll, as the team flew past Troy, 87-70 on Thursday night. The Razorbacks had 20 assists on 31 made field goals, while having five players in double digits in scoring. Samara Spencer led the way with 19 points, while Erynn Barnum followed with 18 on 8-of-9 shots made. In her reunion, Arkansas great Chelsea Dungee made her return to Fayetteville, but this time on the Troy sideline as an assistant coach.

Both teams were making shots like in the opening minutes of the game. The score was tied at 10-10 less than three minutes into the contest, with Makayla Daniels knocking down two triples for the Razorbacks in there. Arkansas then went on an 8-0 run with big thanks to Chrissy Carr coming up with back-to-back layups in the paint. At the media timeout, Arkansas led 18-10 with 4:40 left in the quarter. Troy scored four points out of the media timeout, with many of those opportunities coming from offensive rebounds. Arkansas closed out the quarter on a 9-7 run capped off by a Jersey Wolfenbarger 3-pointer to lead 27-17 after one quarter.

Arkansas began the second quarter 0-for-5 from the field until Barnum came up with a putback basket. After a slow start to the quarter, Arkansas more than made up for that and started to throw a party from beyond the arc with three 3-pointers, including two by Spencer. Arkansas had the 42-21 advantage with 3:23 left in the half, which was big thanks to the Razorbacks’ 17-2 run. The Razorbacks outscored the Trojans 17-7 in the second quarter to go into the locker room up, 44-24. Arkansas forced 14 Troy turnovers in the first half.

Barnum helped the Razorbacks get going in the second half with back-to-back baskets in the paint. Troy cut the lead to 19 in under two minutes in the third quarter, but Spencer could not be stopped, going 3-of-3 from the field to climb up to 19 points. Following another Carr 3-pointer, Troy took a timeout and Arkansas led by 27, the largest lead of the night, with 3:59 remaining in the third. Troy went on a 5-0 run out of the media timeout, but a second-chance opportunity 3-pointer by Wolfenbarger put the Trojans at bay. Going into the final quarter, Arkansas took a 23-point lead, 67-44.

Troy came into the fourth quarter on a vengeance, knocking down 3-of-4 shots, but every time the Trojans would score, Arkansas would respond thanks to Spencer feeding Barnum of back-to-back-to-back possessions. The Razorbacks had the 76-51 edge with eight minutes and some change left in the game. Troy outscored Arkansas 26-20 in the fourth, but the Razorbacks cruised to the 17-point, 87-70 victory.

Arkansas continues its homestand by hosting Oral Roberts on Sunday, Dec. 4 at 2 p.m. The game marks the first Signature Sunday of the year, where players will be available for autographs following the contest.