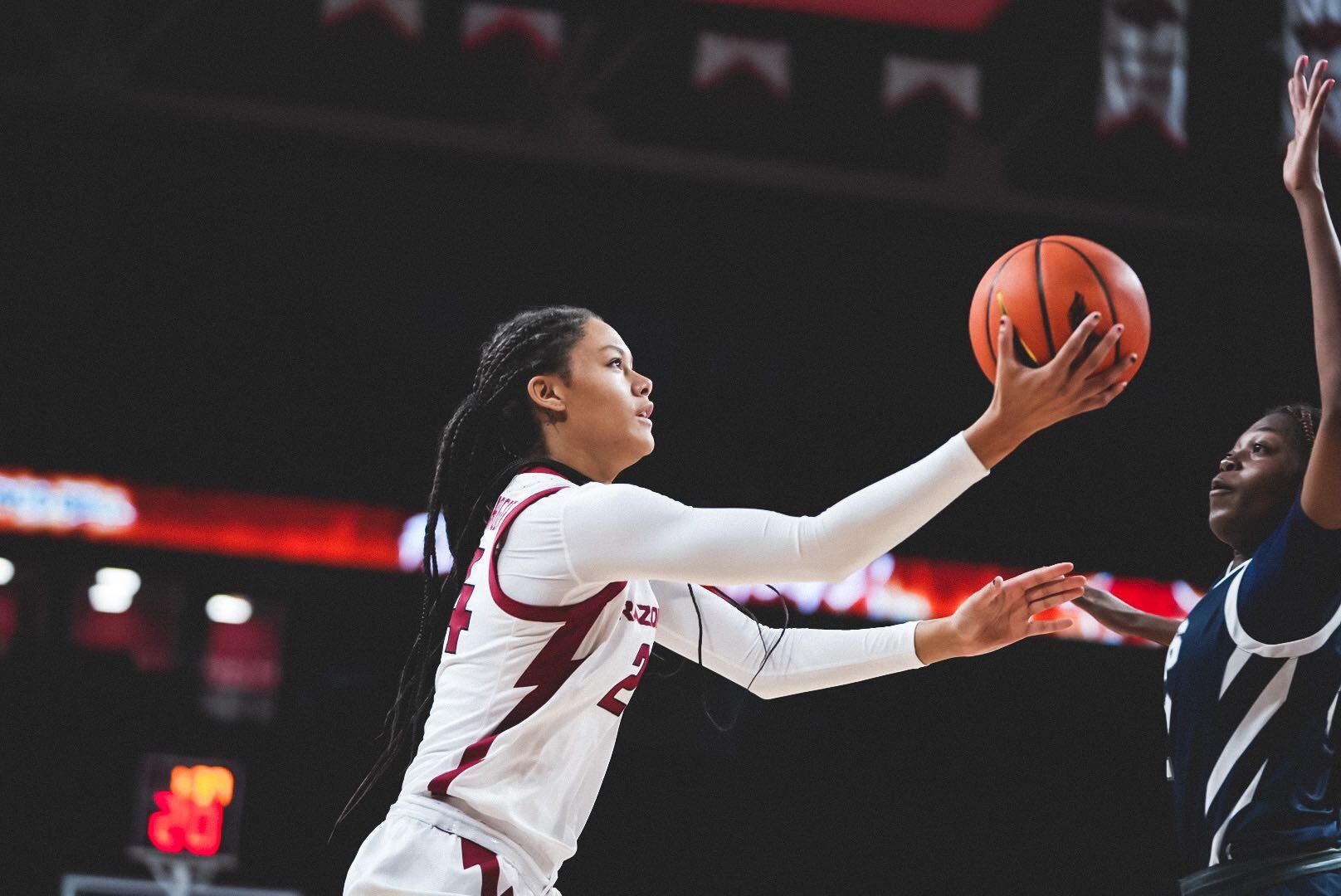 FAYETTEVILLE – Arkansas women’s basketball team took down Arkansas- Fort Smith, 92-62, in the Razorbacks’ lone exhibition of the season. The Razorbacks played all 12 players dressed and five of them reached double digits. Makayla Daniels led the way with a near double-double of 21 points and nine rebounds. Fellow senior Erynn Barnum tallied a double-double of 14 points and 11 boards.

The Razorbacks got off to a hot start, going on a 14-2 run early in the first to lead 24-8 at the media timeout. A big part of that run was thanks to Samara Spencer, who earned 10 of her 15 points in the first five minutes of the game. The Razorbacks extended their lead to 17 points following a Jersey Wolfenbarger second-chance jumper. After one quarter, Arkansas led 34-16.

Arkansas got off to a slow start in the second quarter, only scoring two points in the first five minutes of the frame. Only six combined points between the two teams were scored in the first five minutes of the quarter. UAFS then cut the Razorback lead to 12 following a 3-pointer, but the Razorbacks went on a 7-0 run, capped off by a Daniels jumper. The Razorbacks took a 48-32 advantage at the half.

When Arkansas began to find a groove, UAFS had a response, cutting the Arkansas lead to 12 twice in the early part of the third quarter. At the media timeout, Arkansas led 58-44. The game changer in the third quarter was Maryam Dauda from deep. The redshirt freshman registered back-to-back 3-pointers to put the Razorbacks back ahead by 20 points with under two minutes left in the quarter. Dauda finished with 13 points and eight rebounds off the bench.

The Razorbacks led 68-46 going into the final quarter, where Arkansas outscored UAFS, 24-16. Although the Lions cut the Arkansas lead to 14 off a 3-pointer with 8:22 remaining in the game, the Razorbacks went on to score seven straight points to go back ahead by 21. The Razorbacks knocked down four of their 11 3-pointers in the fourth quarter to finish the game with a 92-62 victory.

UP NEXT
Arkansas will officially begin its season on the road at UAPB on Monday, Nov. 7 with a 6 p.m. tipoff at the H.O. Clemmons Arena.

MORE INFORMATION
For more information about Arkansas Women’s Basketball, follow us on Twitter and Instagram at @RazorbackWBB and on Facebook at Facebook.com/RazorbackWBB. Be sure to subscribe to our YouTube Channel, “Kickin’ It In The Neighborhood” for an inside look at the Razorback women’s basketball program and check out The Neighborhood podcasts at CoachNeighbors.com.