SCOTTSDALE, Ariz. – A hole-in-one by Tyson Reeder on the 71st hole propelled the Arkansas Razorbacks to finish in a tie for 11th at the 2021 NCAA Championship, played at Grayhawk Golf Club’s Raptor Course.

Arkansas and four-day playing partner Texas Tech tied for the third-best score in the fourth and final round Monday. Each carded a 5-over-par 285 and both finished the championships with a 33-over-par total of 1,153. The Razorbacks’ 72-holes score of 1,153 ties for the second-best total over 72 holes by the program at the NCAA Championship.

Including Reeder’s hole-in-one, the Razorbacks played the 17th hole (which was the 188-yard, par-3 8th hole) at 4-under par thanks to birdies by William Buhl and Mason Overstreet. All five Razorbacks closed the Championship with a par on the final hole, while Texas Tech as 3-over on the final hole, to secure the 11th-place finish with the Red Raiders. Another critical hole in the stretch run was the Razorbacks’ 13th hole of play – the 562-yard, par-5 4th hole – as the four counting scores for Arkansas each carded a birdie on the hole.

The graduate senior made the turn at 1-over with a birdie on his sixth hole (the par-4, 15th) and a pair of bogeys. After falling to 2-over with a bogey on his 12th hole, Reeder bounced back with a birdie on his 13th hole. After three pars, Reeder reached the 17th hole. The Edmond, Okla., native played a 9-iron to the hole, which was actually playing 190 yards Monday. The ball hopped twice then rolled about 10 feet for the ace.

Perico opened the final round with a birdie and he reeled off seven straight pars before a bogey on his ninth hole, the difficult 520-yard,par-4 18th hole, to make the turn at even par. He rallied with birdies his 11th and 12th holes and finished his round with five straight pars for his eighth round in the 60’s this season.

Buhl also tied for 44th, carding a 74 on the final round after three 72’s to open the Championship for his 10-over total of 290. The graduate senior posted three birdies in his final collegiate round.  Overstreet played the final nine holes at 1-under for the second straight day, including a chip in from behind the green on his 17th hole (the par-3, 8th), to post a 74. Manuel Lozada tied for 61 with a score of 294 (69-75-73-77).

Reeder, Buhl and Overstreet finish their Razorback careers with a combined five collegiate wins and they will finish among the program’s all-time top seven in scoring average. Buhl was named All-American last season and Overstreet was All-American as a freshman after finishing as the NCAA runner-up. Reeder, who was the NCAA Kingston Springs Region runner-up, was named All-SEC and PING All-Central Region this season. They helped the program with the 2019 SEC Championship, finish runner-up at the 2021 NCAA Championship and finish runner-up at the 2021 NCAA Regional while earning four NCAA Regional bids and posting a pair of top 15 finishes at the NCAA Championship. 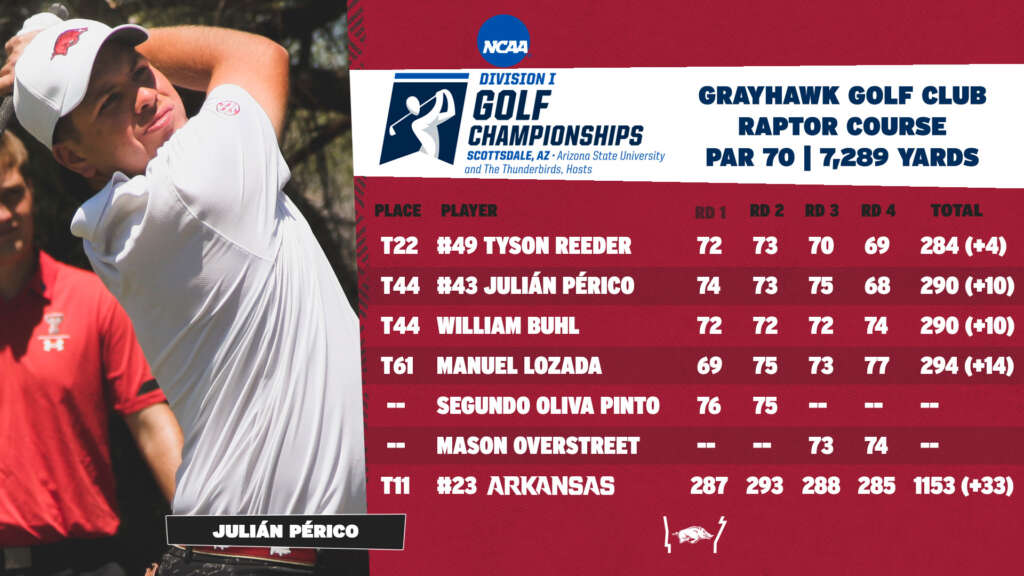