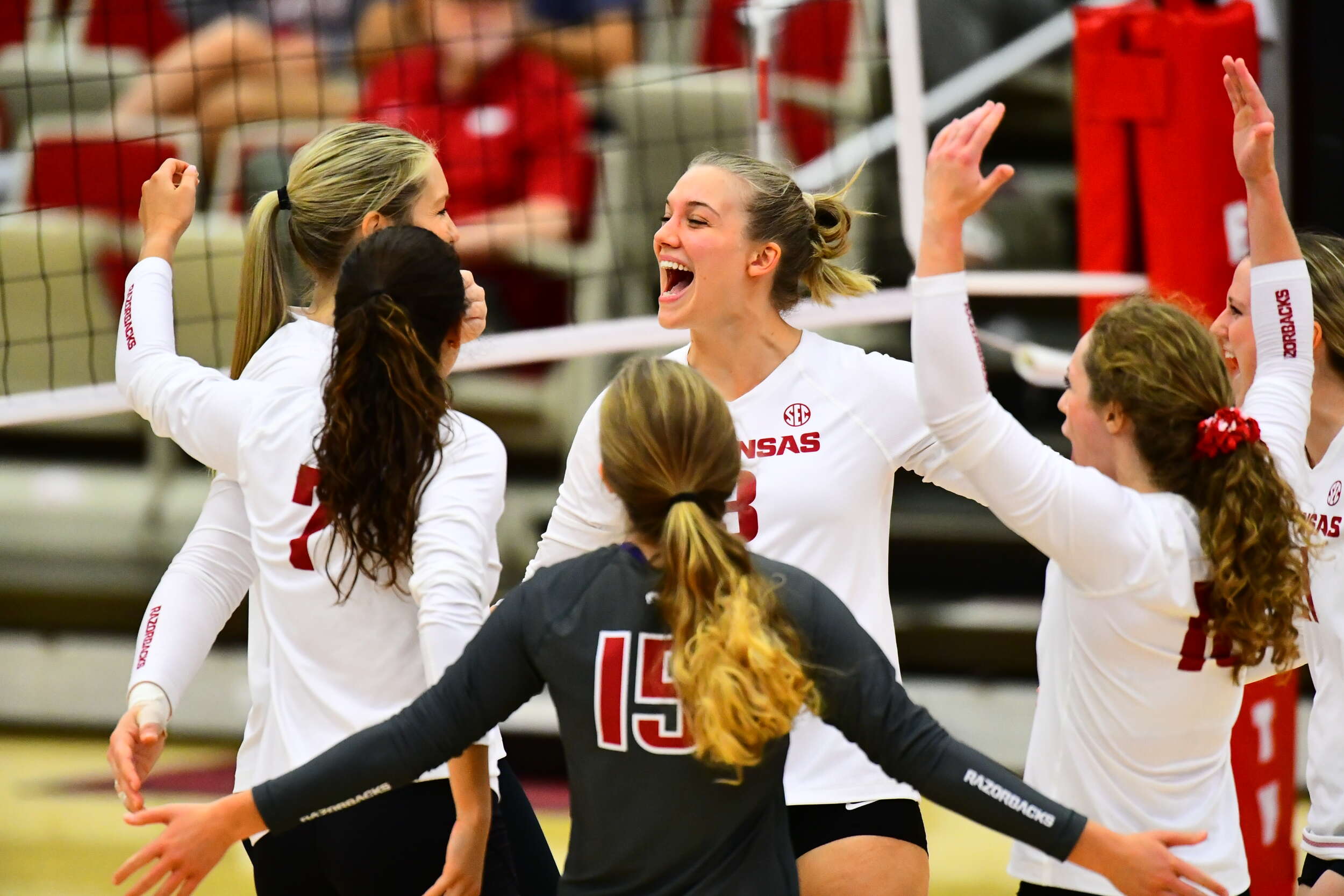 The No. 20 Arkansas volleyball team brought conference action back home on Saturday afternoon and pulled out their first SEC win with a 3-1 victory over Ole Miss.

“We feel good. I think at times there’s some expectations that are causing us to play not as loose as we did early in the year,” head coach Jason Watson said. “We’ve got to navigate that space a little healthier as we move forward. Ole Miss played a really good game and pressured us immensely, and probably made us work a lot harder than we really wanted to. But I think that’s good for us, I think we needed it, and we’re thrilled to get the win of course.”

Senior outside hitter Jill Gillen had another stellar performance for the Hogs and posted 19 kills with just two errors for a .472 hitting percentage. She also had eight digs, a team-best two aces and bolstered the defense with four block assists. Junior Taylor Head had an Arkansas high of 20 kills and 10 digs for a double-double, her eighth of the season.

Set 1
A Gillen kill tied the opening set at 4-4 early, but the Hogs rattled off four straight points to take the lead. Ole Miss took a timeout down 8-4 and added two after that, but the Razorbacks settled in with a six-point run, which featured two kills from Dirrigl and a Gillen ace, for a 14-6 edge. The Rebs huddled again, but Arkansas showed no mercy and grew the lead to as many as 11 points after that. A Gillen kill brought the Hogs to set point, and Dirrigl shut the door on the first frame 25-14 in favor of Arkansas. The Hogs hit .452 to Ole Miss’ .138 in the opening set.

Set 2
The Rebels came out with a vengeance in the second set and quickly took a 7-1 lead that forced an Arkansas timeout. The Hogs threatened with a four-point run and another set of three shortly after to cut the deficit to three, but the Rebs never let up. They were the first to 20 off an Arkansas service error, and back-to-back points for a 22-15 lead sent Arkansas to regroup again. The Hogs scored five unanswered points from there to make it 22-20, and Head tallied four kills in a row to make it 22-20. Arkansas ran out of time, though, and back-to-back Rebel kills sealed the second 25-21 for Ole Miss and tied the match at 1-1.

Set 3
Arkansas used an early 3-0 run capped off by an ace from Head to grab the early advantage in the third. The Hogs held on to the lead until an attack error knotted the score at 7-7. The teams traded three-point runs midway through, which tied things back up at 10-10. Arkansas pulled away with a kill from Gillen and a block from Gillen and Shipes for a 13-11 edge, but the Hogs couldn’t get more than two points at a time, which allowed the Rebels to threaten. Ole Miss went up by one at 19-18, and the two teams kept it tight from there with four ties. Gillen made it 23-all, and then the Hogs locked in. The next two points were claimed by the Razorbacks for a close 25-23 set win and 2-1 advantage in the match.

Set 4
The start of the fourth was all Hogs and senior Maggie Cartwright contributed two kills in a four-point run, which prompted an Ole Miss timeout. The Rebs stayed right with them, too, and answered with four straight points to tie it at 5-5. Ole Miss briefly took the lead, but Cartwright added her fourth kill of the set to swing the momentum Arkansas’ way. It didn’t last long, though, and the teams were neck-and-neck with eight ties after that. The Razorbacks then strung together a 4-1 run for a 19-16 lead, which had Ole Miss call time. Head pushed Arkansas over 20, but Ole Miss came within one. After a timeout, the Hogs responded well and kills from Head and Cartwright put Arkansas two away. A pair from Head and Gillen then closed out the set 25-21 and gave the Hogs the 3-1 match victory.

Up Next
Arkansas continues conference play next week with the team’s first SEC series against Mississippi State in Starkville, Miss. on Saturday, Oct. 1 at 11 a.m. and Sunday, Oct. 2 at 1:30 p.m. Saturday’s match will be streamed on SEC Network Plus, and Sunday’s match will air live on ESPNU.