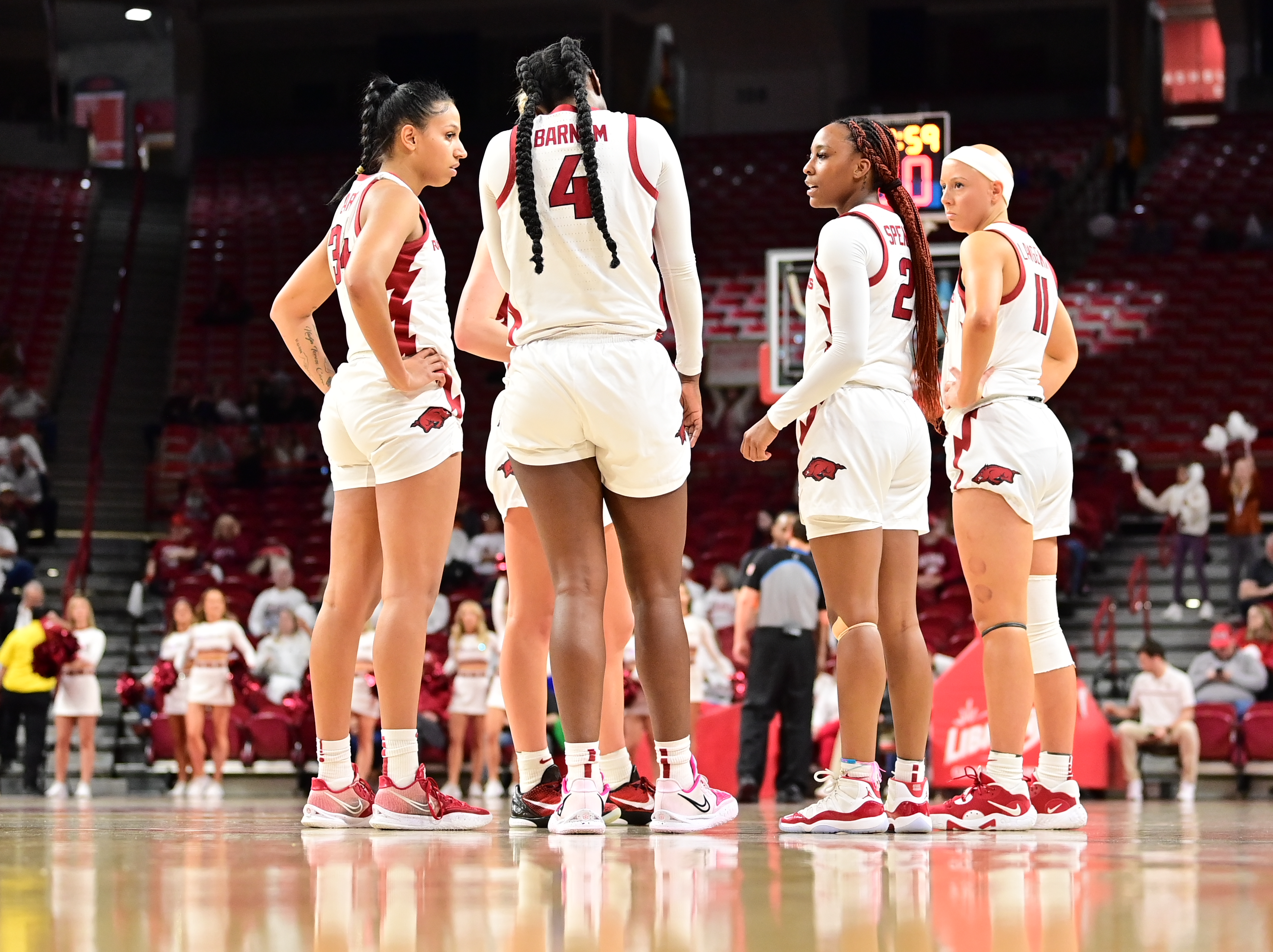 FAYETTVILLE – Arkansas women’s basketball (15-3, 2-1 SEC) dominated on all cylinders against Florida (12-4, 1-2 SEC) to cruise to a 102-74 victory on Thursday. All five starters reached double digits in scoring with 15+ points each and the team tallied a season-high 23 assists, while outrebounding Florida, 43-33. For the first time since 2020, Arkansas hit the century mark in total points, while starting league play 2-1, which is the best for Arkansas in the SEC since the 2010-11 season.

Saylor Poffenbarger got the Razorbacks started with back-to-back baskets with her second one coming off an and-1. Arkansas fell in a drought from the field, missing each of their next four field goals until Makayla Daniels knocked down a shot from downtown and Chrissy Carr got one of her own on the next possession. At the media timeout with 4:31 left in the first quarter, the Razorbacks held a slight 13-11 advantage. Whenever Arkansas would find a groove offensively, Florida would match, as the game was tied five times in the first quarter. The Razorbacks closed the quarter on a 7-1 run to lead 24-19 after 10 minutes of play

Arkansas kept the momentum rolling into the second quarter, as Rylee Langerman had her first basket and drew the foul. Those three points continued the Razorbacks’ run, which stretched to 13-1 and began with a minute and some change left in the first quarter. Florida called a timeout with 7:29 remaining in the second quarter, as Arkansas held the 30-19 edge. After a Florida triple, Arkansas held Florida quiet form the field, as the Gators missed each of their next eight field goals. After a Carr triple, Arkansas found themselves ahead 40-22 with less than two minutes left in the first half. The Razorbacks would not take their foot off the gas, with big thanks to Spencer heating up to deliver eight of her 16 points in the second quarter. Just before the half, Spencer attacked the basket for a layup and drew the foul, converting the three-point play. The Razorbacks outscored the Gators 24-8 in the second quarter to lead 48-27 at the half.

Florida came out of the locker room with some fire, scoring the first two baskets of the second half. A Daniels 3-pointer put the Razorbacks back up by 20, but Florida went on a 5-0 run. After a Barnum layup, the Razorbacks led 53-36 with 6:30 remaining in the third quarter. Just after the media timeout, Florida knocked down two free throws, but a Langerman 3-pointer on the other end, put Arkansas back up by 20 with less than five minutes left in the third frame. On multiple possessions late in the third, Daniels kept finding her home at the line, knocking down five of those six shots, as Arkansas led 68-49 with less than two minutes remaining in the quarter. Although the Gators outscored the Razorbacks 28-24 in the quarter, Arkansas entered the fourth quarter with a 72-55 lead.

The Razorbacks got the final quarter started with a Barnum and-1, but the Gators responded with one of their own. After two Poffenbarger baskets, including a 3-pointer as the shot clock expired, all five starters were in double digits in scoring. Arkansas led 82-67 with 5:52 left in the game. A second-chance jumper by Poffenbarger sparked the Razorbacks on an 11-3 run. Six of those points in that run were scored by Carr and Arkansas found itself ahead 91-67 with less than four minutes left in the game. Arkansas ended the game on an 11-7 run, highlighted by an Emrie Ellis 3-pointer and two free throws by the sophomore, who helped Arkansas pass the century mark for the first time since 2020. Arkansas voyaged to an 102-74 win Thursday night.

Arkansas will play its first of two games against Missouri in the SEC slate on Sunday, Jan. 8 in Columbia, Missouri. Tipoff is set at 2 p.m. at Mizzou Arena and the game can be broadcast on SEC Network+.