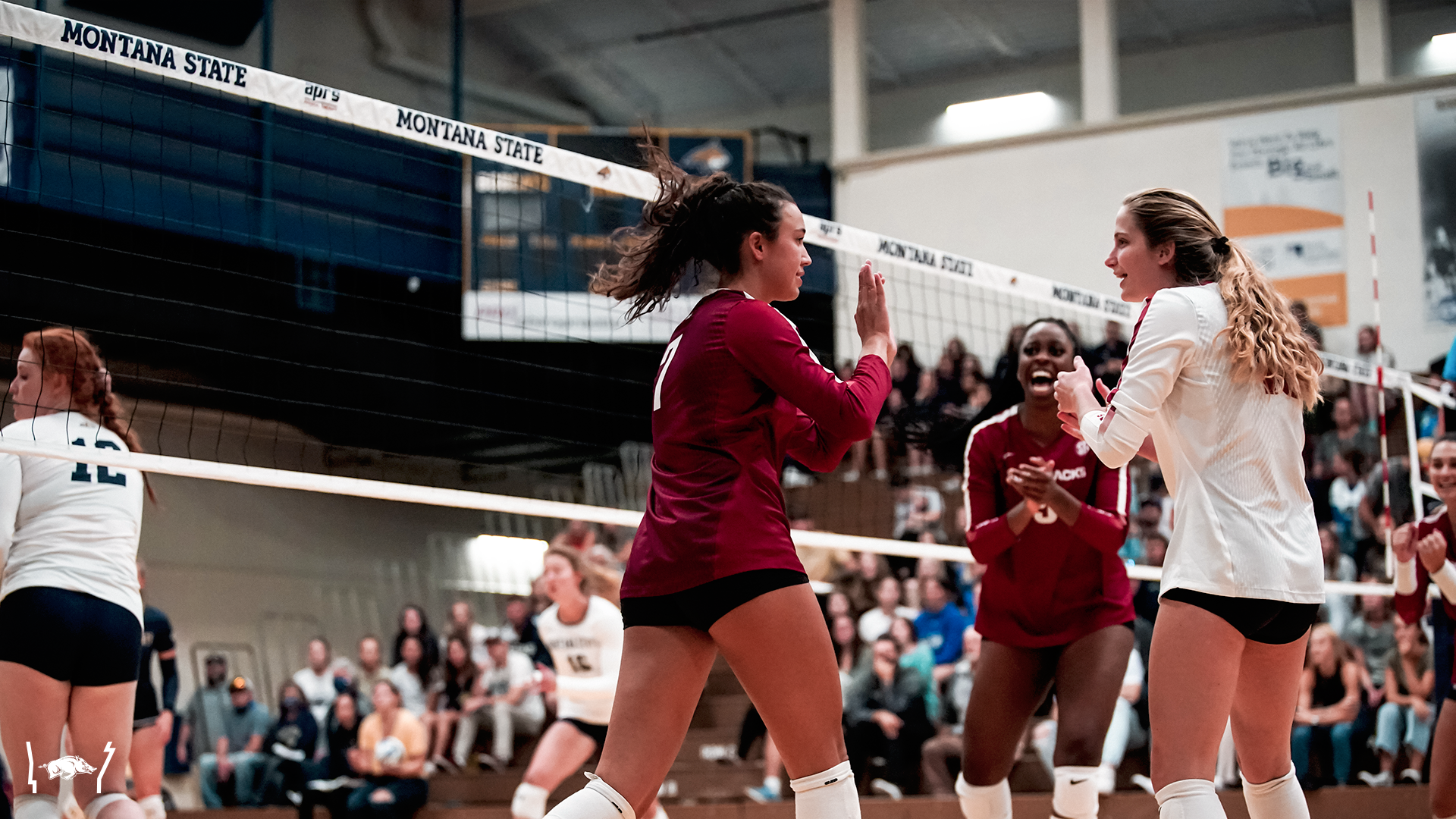 The Razorbacks found themselves down 2-0 in a match for the second time in less than a week on Thursday, but this time, they were the ones to emerge victorious in the first round of the Bobcat Classic.

Arkansas rallied back from 21-25 and 26-28 set losses to Montana State and took both the third and fourth 25-19 to force an extra. It was all Hogs in the second half of the match and a 15-7 fifth set sealed the match in favor of the Razorbacks, their first five-set win and first away win of the season.

It was a historic night for senior middle blocker Ellease Crumpton, who set a new career high in kills with 15, which led Arkansas. Crumpton had set her previous high, 11, back in 2019 against Montana State at Barnhill Arena. Crumpton also set a new personal best in total attempts with 21, and her nine blocks match a career high.

Redshirt sophomore Natalie Perdue played in her second match of the season and set a new career high in kills with six, and she also added one block assist.

The first set between the Razorbacks and Bobcats was close from the start, but the home team started to pull away with an 11-9 lead. Arkansas couldn’t gain much ground from there and while the score was knotted at 17-17, Montana State utilized an 8-4 run for the 25-21 victory. The Razorbacks hit just .079 to the Bobcats’ .229 in the opening set.

The second set had all of the momentum in favor of Arkansas to start, and the visitors led by as many as four points through the midway mark. Montana State called a timeout after a pair of kills from junior Jillian Gillen, with the home team down 17-13. The Bobcats then came back with a vengeance, and scored four straight points to come within one of the Razorbacks. Crumpton got the Hogs out of danger with a kill to make it 21-19, but Montana State kept pressing and eventually tied the score at 23-23. The Bobcats spoiled a Razorbacks set point and got one of their own, which sent Arkansas to a timeout. The Hogs got out of the jam and earned another set point opportunity, but were thwarted by the Bobcats and fell 28-26.

The Razorbacks turned up the heat in the third set, grabbed an early lead, and never looked back. An 8-3 run by Arkansas to start featured service aces from Head and Ryan, a solo block from graduate transfer Abigail Archibong and kills from Crumpton and Perdue sent Montana State to a huddle. The Bobcats added four points, but the Razorbacks kept rolling and took an 11-point lead, 18-7. Montana State posted a 5-0 run shortly after, but Arkansas still held a six-point lead as the team headed to a timeout. A kill from Head brought the score to 24-18, and while the Bobcats spoiled the set point, Crumpton shut the door with a kill and the 25-19 victory.

Arkansas built on its .333 third set hitting percentage in the third and swung even better in the fourth. Two quick points turned into a solid lead for the Razorbacks, and a kill from Cartwright made it 9-6. Arkansas held at least a three point advantage over Montana State from there on out, and a three-point Razorback run that ended in a solo block from Head sent the Bobcats to regroup with an 18-12 score. Montana State then added two points, but Arkansas had three for a 21-14 lead and another Bobcat huddle. A kill from Cartwright and a Montana State attack error made up the last two Razorback points, and Arkansas forced a fifth set with another 25-19 win.

The Razorbacks’ best set of the night also happened to be the deciding one, and the team grabbed a 6-2 lead early, which had three kills from Perdue, two from Crumpton and a service ace from Ryan. After a Montana State timeout, the Razorbacks went on a 5-2 run and brought the score to 11-5. The last three points all went in favor of Arkansas. A kill from Head initiated set and match point, and she secured the comeback victory with an ace, her second of the night. Arkansas hit .353 to Montana State’s -0.059 in the 15-7 fifth set.

The Razorbacks continue action in the Bobcat Classic on Friday with a 4 p.m. match against Utah State and on Saturday with an 11 a.m. tilt versus Portland. Both matches will be streamed live via Montana State’s website, and live stats will be available.