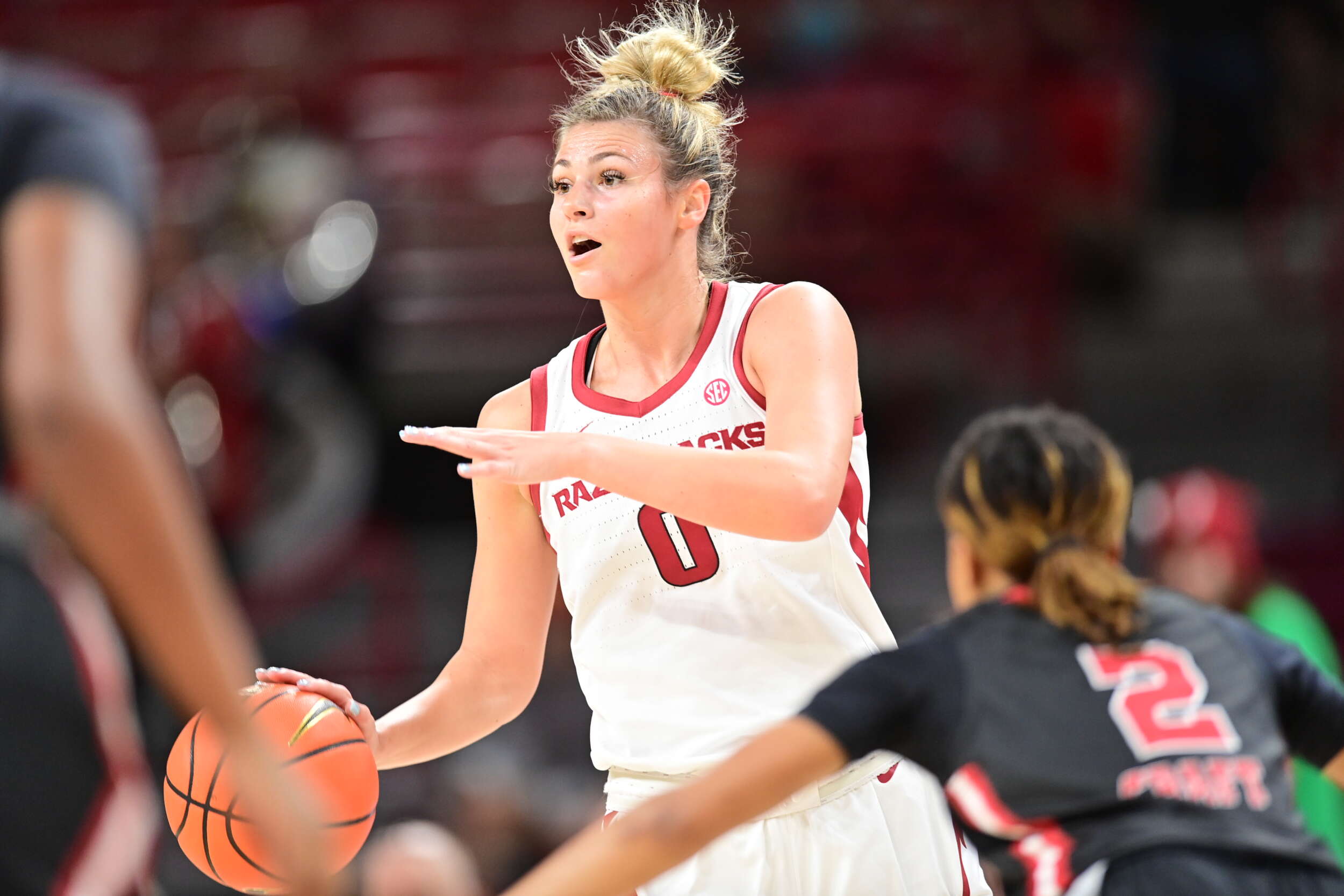 FAYETTEVILLE – The Arkansas women’s basketball team (11-0) battled back on Thursday night to take down Lamar (4-4), 63-50. Arkansas found themselves in unfamiliar territory at the half, trailing 33-31, but after holding the Cardinals to just 17 points off 17.2 percent shooting in the second half, the Razorbacks found a way to remain as one of 13 unbeaten teams in the country. Chrissy Carr and Saylor Poffenbarger came up with big shots in the second half to pull the Razorbacks away with the win. Carr led the game with 18 points, while Poffenbarger tallied her second consecutive double-double off a career-high 17 points and 12 rebounds.

In the first quarter, Lamar fired away a 3-pointer on their second possession as the shot clock expired, but Carr followed on the other end with one of her own. Arkansas pulled away 8-3 following a Samara Spencer 3-point play, but Lamar scored four straight points, and at the media timeout, the Razorbacks led by just one, 10-9. Arkansas forced six consecutive Lamar turnovers but could not capitalize off those mistakes, as Lamar retook the lead, 13-12, with 33 seconds left in the first quarter. Following a Lamar 3-pointer with six seconds left, the Cardinals had the 16-13 advantage after 10 minutes of action.

Maryam Dauda made a layup in the opening minute of the quarter to cut the Lamar lead to one, but Arkansas fell in a drought after coming up empty on a number of offensive possessions. A hard-fought second-chance layup by Jersey Wolfenbarger put the Razorbacks back within one, but after a Lamar triple, the Cardinals led, 21-17 with 6:27 remaining in the half. Following an Erynn Barnum and-1, the Razorbacks trailed by one, 23-22, at the media timeout. Out of the break, Carr helped the Razorbacks pull ahead for the first time in the quarter, 24-23. Poffenbarger started to heat up, coming up with a layup, a jumper and a 3-pointer, but the Razorbacks’ lead was just one with under a minute left in the half. Lamar ended the half on a 5-0 run, as the Razorbacks went into the locker room down two, 33-31.

Carr tied the game up at 35 out of the half with her second triple of the night. The Razorbacks found themselves down again, but a Spencer 3-pointer put her in double digits and Arkansas back ahead. That lead was short-lived, as Lamar retook the lead, and at the media timeout, Arkansas trailed, 42-41. Lamar fell in a scoring drought for over five minutes, and following two Spencer free throws on different possessions, the Razorbacks led by two, 44-42, and would have the advantage for the remainder of the game. Carr rattled in a 3-pointer in a quiet quarter from the field for both teams. Arkansas led 47-43 going into the final quarter of play.

Spencer opened the quarter with a tough layup and after Arkansas did not score a point for nearly three minutes, Carr nailed down a tough 3-pointer and following a Pofffenbarger layup, the Razorbacks led by nine, 54-45, with 5:56 left in the game. Lamar knocked down a triple after calling a timeout to cut the Arkansas lead to four with less than four minutes left. Arkansas could not score for three minutes and some change, but a Poffenbarger layup broke that drought. The Razorbacks finished the quarter on a 9-0 run to win the game, 63-50.

The Razorbacks finish this four game homestand on Sunday, Dec. 11 against Arkansas State. Tipoff is set for 3 p.m. with coverage of the game being broadcast on SEC Network.