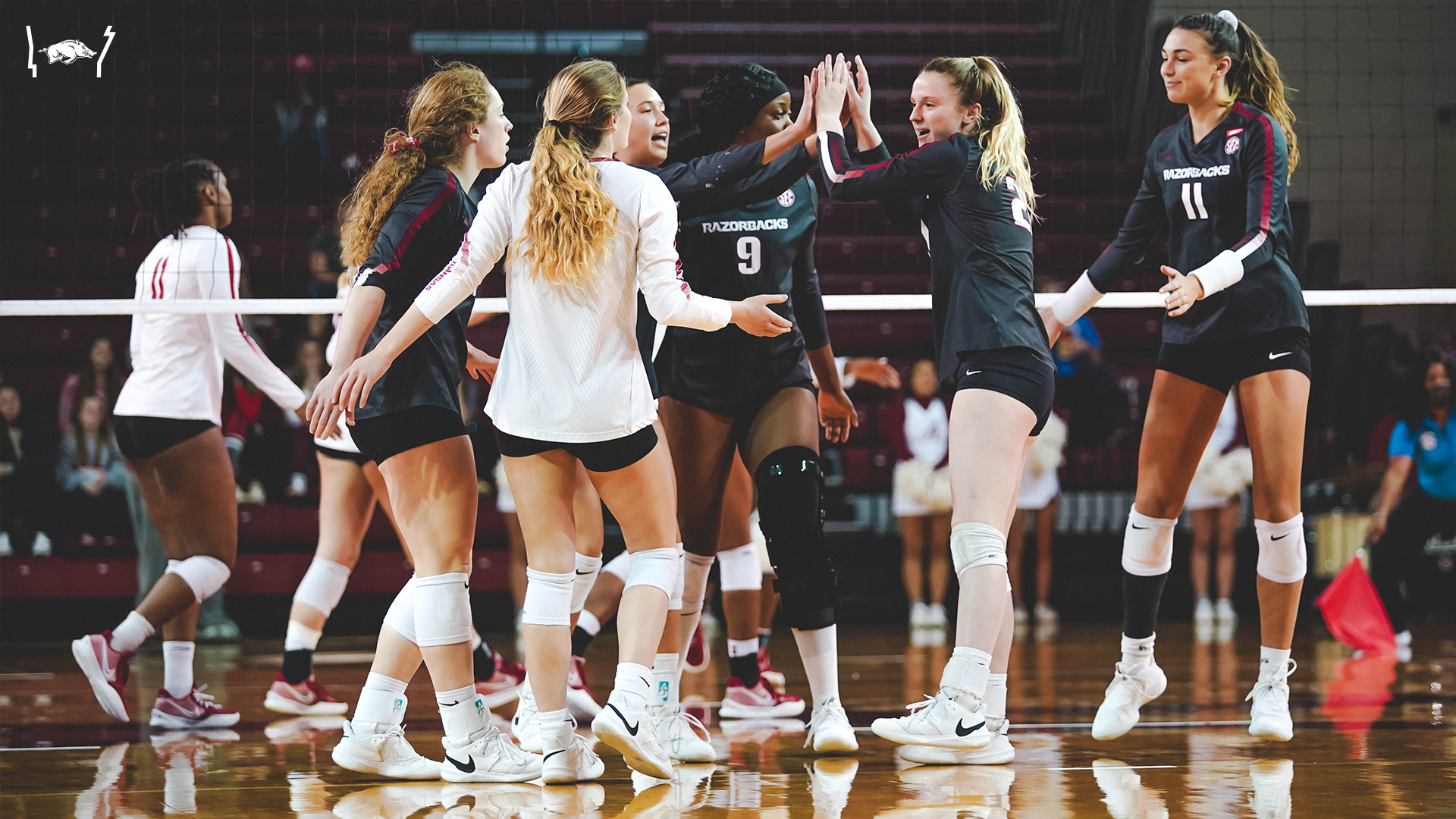 The Hogs went into their weekend series with the Crimson Tide on a 10-year losing streak in Tuscaloosa. By Sunday, Arkansas started a new streak in enemy territory: 2-0.

The Razorbacks defeated the Crimson Tide 3-1, just as they did on Saturday, and improved to 8-4 in the SEC and 17-6 overall. The team’s 17 wins are its most since the 2017 slate with six matches remaining in the regular season.

Sophomore Taylor Head had an excellent match for the Hogs and had a team-best 18 kills on 31 swings for a .548 hitting percentage. Junior Maggie Cartwright had a double-double with 14 kills and 16 digs, and freshman Courtney Jackson led the team in digs with 19.

Along with Head and Cartwright, junior Jillian Gillen was the third Razorback to register double-digit kills on the night with 15, and four Hogs hit over .250 on the night. The team’s final clip of .306 on the match is the highest the Hogs have hit since their sweep of Portland on Sept. 4.

The two teams traded points to start in the first set, and while Arkansas had a slight lead early, the Tide caught up quickly and got an 11-10 lead of their own. There were four ties from there, and the Hogs went into the media timeout with a one-point edge at 15-14. Alabama found a rhythm after that and scored six of the next eight points to get to 20 first. The home team used a 3-0 run to force set point, and while the Razorbacks spoiled it twice, the first set went to Alabama 25-21.

The Hogs came out fast and furious in the second set and answered an opening point from the Tide with two aces from Gillen and two kills. Alabama came within two, but Arkansas used a 5-2 run and went up 15-9 at the media timeout. The Tide made another push to narrow the gap, but three straight Razorback points regained the six-point lead, 18-12. Arkansas kept Alabama down by at least four points from there, and a pair of kills from graduate Abigail Archibong and Gillen closed the set 25-17 and tied the match at one apiece.

A 5-1 run led by Head propelled the Hogs to an early lead in the third set and Alabama took a timeout. The Tide limited the Razorbacks to small spurts through the midway point, but couldn’t get any long runs themselves and Arkansas maintained a lead. The Hogs pushed their advantage to four points and the Tide took a timeout. Alabama managed to cut the lead to two at 22-20, but three straight errors for the home team gave the set to the Hogs, 25-20.

The two teams kept it close early and were tied four times to start. The Razorbacks broke away on a kill from Gillen and Tide attack error, which put them up 10-7. The Tide knotted the score at 16- and 17-all, but back-to-back kills from Cartwright gave the visitors a two-point lead back. Alabama called a timeout down 21-19, and while the Tide got one out of the break, the Hogs got two. Another timeout couldn’t swing the momentum the Tide’s way, and kills from Head and Gillen shut the door on the fourth set 25-20 and the match 3-1.

Up Next
Arkansas returns to Barnhill Arena Nov. 12-13 for a series against No. 23 Florida. Friday’s match is set for 7 p.m. and Saturday’s will begin at 5 p.m. Both matches will be streamed live on SEC Network+.

Visit ArkansasRazorbacks.com for the latest information on all things Arkansas Volleyball. You can also find the Razorbacks on social media by liking us on Facebook (Arkansas Razorback Volleyball) and following us on Twitter and Instagram (@RazorbackVB).