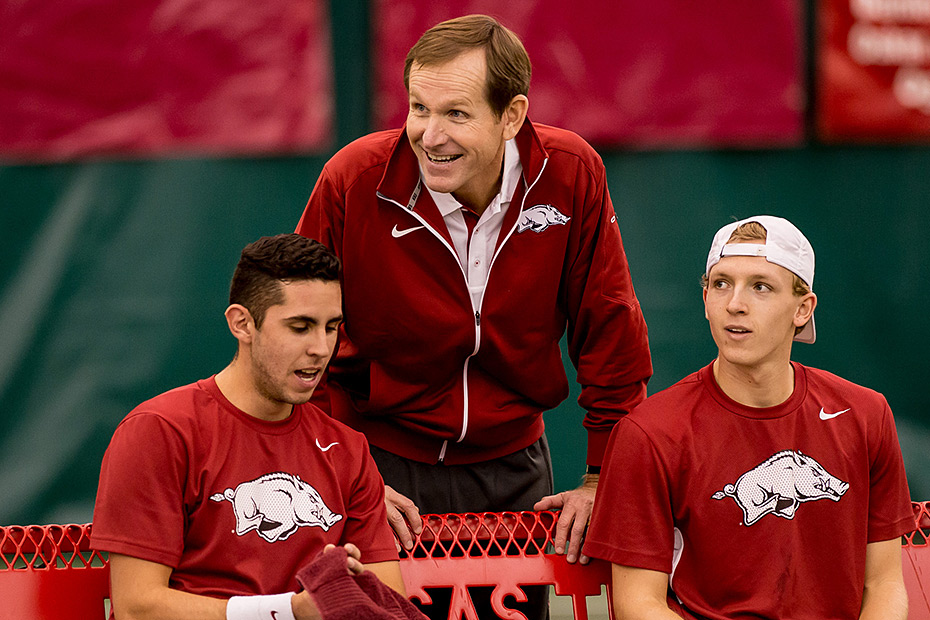 FAYETTEVILLE, Ark. – On a warm, humid night in Delray Beach, Florida, a community of about 60,000 people 10 miles north of Boca Raton, Andy Jackson is sitting in a sports grille along East Atlantic Avenue watching a Miami Heat playoff game.

An avid basketball fan, the game is the perfect distraction for the veteran tennis coach. Recently separated from the University of Florida’s men’s tennis program after guiding the Gators to several Southeastern Conference championships and NCAA Tournament trips during the past 11 years, Jackson is taking a much-deserved and long-delayed sabbatical after three decades of coaching top-flight programs at a pair of SEC institutions.

A man sits down on the raised barstool next to Jackson. After taking a brief glance toward the new patron, Jackson turns his attention back to the big-screen television. It’s playoff basketball after all, and the Heat’s “Big Three” are in the midst of a three-peat run. Suddenly and inexplicably, the stranger punches Jackson in the nose and walks away.

Sprawled on the floor and bewildered by both the blow and the unfathomable reason behind the sucker punch, Jackson is helped up by staff and security. How did Jackson, a respected and accomplished tennis coach, get to this point?

The pressure to win in the SEC – arguably the most competitive league in college athletics – is intense. Somewhere along his career, Jackson said after years of chasing an NCAA title, he lost sight of the big picture: Sometimes life and sports isn’t all about winning a national championship.

“The longer I stayed in it with the goal of winning a national title, the more I got away from giving our program [at Florida] the credit for doing well and doing our best,” Jackson said, recalling his South Florida sabbatical from his office at the George M. Billingsley Tennis Center. “At that time in Delray Beach, I thought, if I ever got back into it as a head tennis coach, I would have my team try to do its best, be happy and feel good about achievements accomplished during the season regardless of whether we won an NCAA championship or not.”

And Jackson did get back into it. After picking himself up from the floor in that Delray Beach sports grille, Jackson was a new man. A year of reflection, pursuing personal interests that included delving into sports analytics and simply relaxing after 30 grinding years was exactly what he needed to once again lead a tennis program back to national prominence.

Three years after accepting the head coaching job at the University of Arkansas, Jackson’s No. 12 Razorbacks are poised to crack into the top-10 with two matches remaining in the regular season leading toward the SEC Championship.

The combination of Jackson’s new “do your best” philosophy and successfully recruiting Giammarco Micolani, Michael Redlicki, Jose Salazar and Adam Sanjurjo – four student-athletes with elite potential and significant national and world competition know-how – have the Razorbacks experiencing unprecedented levels of success within the SEC.

As for Jackson, a new perspective on life, coaching and winning hasn’t blunted his desire to build Arkansas into an SEC and NCAA championship contender. It’s the one tangible accolade that’s escaped the veteran coach thus far. Even though winning the NCAA title remains one of his primary motivators, it will never again define his team’s seasons as an overall success or failure for Jackson.

Inside his office at the Billingsley Tennis Center, Jackson has a small, white decorative pillow embroidered with the following quote in red yarn: “Shut up and do your best.” To him, that quote symbolizes everything he learned during his moment of reflection and rest in Florida, and the new direction his career and life has taken.

“The advice I gave myself during my sabbatical year was to just shut up about trying to explain how being in the top 10 is good, that winning the SEC is great, losing guys to the pros is hard and this is a bad break here and there … well, don’t worry about that,” Jackson said. “Just do the best you can and anybody who can’t accept that, don’t worry about it. I really didn’t need that mindset early on in my career. I figured it out somewhat quickly and I got away from it as I got older. I hope I’m back to where I was when I was younger: Just go to practice, do your best, compete, and do it all over again.”

It is a philosophy that has not only picked Jackson up off the mat personally and professionally, but one that has helped position Arkansas men’s tennis to have more than a fighter’s chance at SEC and NCAA championships.