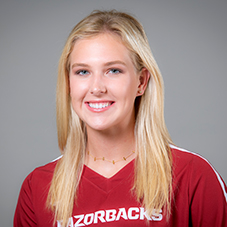 Did not compete (redshirt).

Prior to Arkansas
A four-year starter and three-time district selection for Seguin High School, Cheek was named the District 26-5A Offensive MVP after a senior season in which she registered 569 kills, 341 digs and 33 service aces. She totaled 1,455 kills, 725 digs and 133 aces during her prep career. Cheek was a three-time member of the All-District First Team and helped Seguin to a pair of area titles and three trips to the 5A state playoffs. She played club with Austin Juniors and represented Team USA at the 2016 European Global Challenge in Croatia.

Personal
Abby is the daughter of Louis and Suzanne Cheek, and has three siblings—Emily, Joseph and Henry. Her father played in the NFL for six seasons and her brother is a current offensive lineman for the Pittsburgh Steelers, while her sister played volleyball (2008-11) at Loyola Marymount. Cheek is planning to enroll in the Walton College of Business at Arkansas.