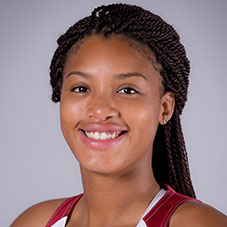 AS A SENIOR (2016-17)
Played in all 30 games with 18 starts as a senior … Nine games with double digit points … First double-double of the season with 10 points and 11 rebounds against Memphis … Selected to the Nugget Classic All-Tournament Team … Two games with four blocks (SHSU, Tulsa) … Career-best four assists against Butler … Double-double with 11 points and 11 rebounds on Senior Day against Auburn … Ten games as a sophomore and 17 career games as a Razorback with double-figure scoring … Two games in 2016-17 and five in her career with a double-double … Career-best going 7-for-12 from the free throw line against Louisiana-Monroe … Led Arkansas in scoring twice with 13 points against ULM and with 10 points versus Missouri … Led Arkansas in rebounding seven times including tying her career-best with 11 against Auburn on Senior Day.

PRIOR TO ARKANSAS
Alecia Cooley is a 6-3 post player … From Evanston, Ill … Attended Evanston Township High School … Junior college All-American at State Fair Community College in Sedalia, Mo., in her sophomore season … Paced State Fair to a 21-9 record and a 4-0 mark in conference play in 2014-15 … As a freshman, Cooley played in all 30 games averaging 22.2 minutes per game … Averaged 11.4 points per game, shot 57.8 percent and had 7.0 rebounds per game … Earned MCCAC and Region 16 First-Team honors as a sophomore averaging 17.3 ppg and 11.7 rpg to lead the Roadrunners … Cooley shot 55 percent from the floor and 70.3 percent from the line in her second season.