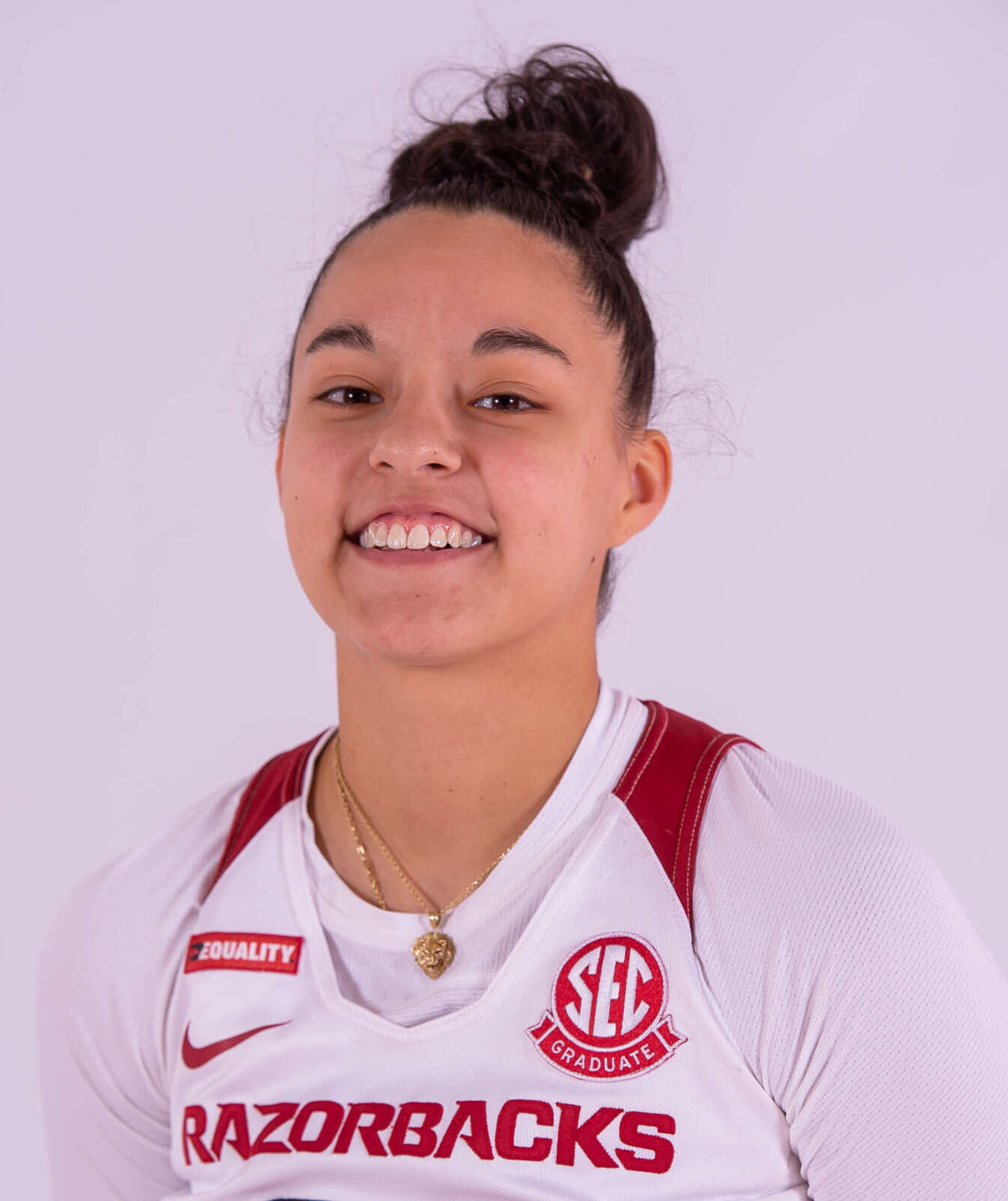 AS A GRADUATE (2021-22)
Finished her Arkansas career starting 30 games in her final collegiate season … Earned Second Team All-SEC honors, her first postseason honor from the league office … Averaged 15.4 points, 4.6 rebounds, 1.9 assists, 1.4 steals, 35.3 minutes per game … 42.0 FG %, 40.2 3FG %, 81.7 FT % … 23 games in double figures, eight games with 20+ … Her 42.9% mark from deep during her three seasons on the Hill stands as a program record …  Her 261 three-pointers made is the fifth-most in program history despite only suiting up for Arkansas for three seasons …  Became the 30th member of Arkansas’ 1,000-point club … Only Hog ever with three or more seasons shooting 40% or better from distance … Now owns three of the top six best percentage marks from deep over a single season in program history … Scored a season-high 30 points in Arkansas’ comeback win against Auburn … Hit the game winning floater against Auburn, a game the Hogs won despite missing three starters … Scored 25 points on 10 of 18 shooting in the Hogs’ upset of #12 LSU … Poured in 25 points and pulled down nine rebounds to help the Hogs come back against Missouri on the road … Was great in a few SEC losses as well, going for 29 points at #7 Tennessee and going for 26 against the Lady Vols at Bud Walton Arena … Led the Hogs in the NCAA Tournament, scoring 24 points against the Utes … Helped the Hogs draw a crowd of 8,292 on her senior day, the eighth-largest crowd in Arkansas Women’s Basketball history.

AS A REDSHIRT SENIOR (2020-21)
Started 27 of 28 games in year two with Arkansas … Averaged 13.5 points, 2.9 rebounds, 1.5 assists, 1.1 steals, 32.1 minutes per game in SEC Play … 43.0 FG %, 43.5 3FG %, 80.1 FT % … 21 games in double figures, five games with 20+ … Her 77 threes made is tied for the eighth best single-season mark in program history …  Her 43.5 percentage mark from deep is the third best mark in a single-season in program history …  Now owns two of the top three best percentage marks from deep over a single season in program history … Hit five or more threes in seven games this season … Had five such games in SEC Play … Exploded on senior day against Alabama, scoring a career-high 35 points … Did so on 12-19 shooting, including 8-14 from beyond the arc … Scored 23 points and pulled down six rebounds in the Baylor win … Was named College Sports Madness National Player of the Week following that performance … 16 of those points came after halftime … Was also huge in the UConn win, going for 22 points … Scored 19 in the Hogs’ win over Auburn at home … Added 21 more points in Arkansas’ close loss at Texas A&M … Made six threes in Arkansas’ win at SMU … Scored 17 against Mizzou at home before scoring 17 on the Tigers on the road.

AS A REDSHIRT JUNIOR (2019-20)
Was great during her first season on the Hill, starting all 32 games for Head Coach Mike Neighbors … Averaged 14.7 points, 3.2 rebounds, 1.9 assists, 1.1 steals, 33.1 minutes per game … 44.2 FG %, 44.7 3FG %, 92.3 FT % … 22 games in double figures, seven games with 20+, five of which came during SEC play … Went for 25 against Auburn, hitting a season-high seven threes …  Dropped a season-high 29 points against Tennessee … Went for 24 in Arkansas’ comeback win over Missouri, including 13 in the second half … Averaging 15.9 points, 2.9 rebounds, 1.7 assists, 0.9 steals per game in SEC play … Finished sixth in the SEC in scoring over the conference schedule … Led the league in conference play in three-pointers made (50) and three-point percentage (.463) … Led the league in average minutes played in conference only games (35.9) … Finished second in the NCAA in three pointers made (106) … Finished ninth in the NCAA in three point percentage (.447) … Her three-point percentage is now the new single-season program record … Her 106 threes made is also a single season program record, breaking Wendi Willits’ record, which had stood at Arkansas for over 20 years … Scored her 1,000th career-point against Auburn in the first round of the SEC Tournament, becoming one of just 29 Hogs to ever cross the 1,000-point threshold.

AT TCU
TCU career spanned two seasons where she played in 59 games and averaged 9.6 points per game, including 10.4 ppg in 2017-18, helping the Horned Frogs reach the semifinals of the WNIT … Shot 39.1% overall and 38.2% from beyond the arc … Increased her assist production from 32 as a freshman to 103 as a sophomore.

AT WAGNER HS
McDonald’s All-American … Five-star recruit out of high school and is transferring to Arkansas after two seasons at TCU … Played in the McDonald’s All-American game and the Jordan Brand Classic game following her senior season at Wagner High School in San Antonio, Texas … Won the 3-Point Shootout and was part of the winning team at the Legends and Stars shootout, hitting a half-court shot to clinch the victory … Paced the Thunderbirds to four consecutive University Interscholastic League (UIL) State Tournament appearances reaching the semifinals three times and the regional final as a senior … Earned four Texas Association of Basketball Coaches (TABC) and Texas Girls Coaches Association (TGCA) All-State First-Team selections, was a UIL Class 6A All-State Tournament First-Team selection as a junior and was a four-time TABC Region IV All-Region First-Team honoree … Finished her high school career with 2,769 points, the second-most in San Antonio city history.